I had my oil changed and was told by the shop that the threads on the plug are stripped. They had to glue the bolt back and told me for $350 they can replace the oil pan. It is an older car but only has 140,000 miles. They said sometimes these plugs just wear out. I feel like they may have simply over tightened the bolt but don’t want to take responsibility? Any feedback? This is the third time in a row that this shop changed the oil.

Stripped threads can be repaired by installing a Time-Sert threaded insert. If your shop doesn’t know what a Time-Sert is, it’s time to find a competent mechanic. 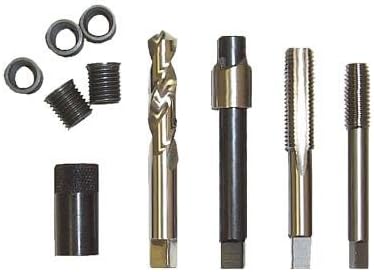 M14x1.5 oil pan thread repair kit by Time-Sert® p/n 1415A simple 4 step process will repair stripped threads in your oil pan. The tooling is made to be used by hand using 12 point sockets with a stand ...

And the plugs do not “wear out,” the threads are damaged by the guy/gal cross-threading or over-tightening the plug.

Repairing the threads with a Time-Sert should take less than an hour of labor and cost maybe $75 or so if you can find a shop who will do it for you.

This is such a common problem that they sell slightly oversized oil plugs with self-tapping threads. Cost is under $10.00 for the new plug.

They glued it back in??? I’d suggest you get this to a competent shop to have the plug removed and the hole either drilled oversize and tapped or helicoiled. I would have very little confidence in a glued in plug and if it drops out while you’re cruising down the road you’re looking at sudden total engine destruction.

For the record, this “you need to replace the oil pan” for hundreds of dollars seems to be the latest in ways to steal large chunks of money from unsuspecting victims. This past year we’ve seen way too many of these posts, and we never used to see them before. I( find it hard to believe that anybody mechanically inclined can’t figure out how to repair a damaged threaded hole without replacing the entire pan.

Oversized plug, female insert on pan, rubber plug…whole lot of ways to fix this for less than a new pan.

Next time you’re at that shop, see if they TIGHTEN nuts+bolts with air tools (the ones that go “BRRR-ZIP!”) if so, you know why your threads are trashed.

Oil pan plugs do not wear out if treated normally. A vehicle with 200K and having it’s oil changed at 4K would only amount to the plug being removed and re-installed 50 times. That oil pan plug and pan threads would be babies when you consider that the plug and oil pan are both made of metal. A gorilla or ham fisted human can wreck the plug or threads in mere seconds.

This was damage caused by overtorquing or cross threading the plug, but the majority of the damage could have been done previous to this shops oil change. Gluing the plug back in is a big concern right now, that should not have been done, If they only used a little threadlocker, then there should be no damage and any of the repairs suggested above should be satisfactory.

If they epoxied the bolt back in place, then the pan may have to be replaced, and they should pay for it. That is unacceptable.

BTW, usually the bolt is softer than the bung so the bolt threads take the majority of the damage from over tightening, a new bolt/plug and gasket may all that is needed to repair this. I usually replace my bolt/plug every 100k or so, and I replace the gasket every third or forth oil change. An old gasket that doesn’t seal often leads to over tightening the bolt. A good shop should know this.

This is a fairly common problem. If it is the worse problem you have with your car, that’s a good thing. But you still need to get it fixed.

The plug should last the life of the car if treated properly. The most common cause of this is over-tightening, often to prevent a leak that is caused b/c the sealing washer is damaged but still re-used. That washer should be replaced with a new one each time.

In the future – after you get this problem addressed either with a new pan or the aftermarket fixture described above – when getting your oil changed, inform your shop the tightening torque recommended for the oil plug, and require them, if they want your business, to use a calibrated torque wrench. Also supply them with a new oil plug washer. Shops for some reason often don’t keep these on hand. No worries, one visit to your dealer, they’ll be able to tell you the correct oil plug torque value, and supply you a source of new oil plug washers.

Oil drain plugs do not wear out, gluing one in with any substance is stupid, and the shop in question may not be the one that damaged the plug.

Your car is X years old with 140k miles and any drain plug thread damage could have happened at who knows what point in the past.

I’m going to go against the grain on this one. Yes, drain plugs do wear out. Take any bolt and loosen and tighten it dozens of times, sometimes blazing hot, sometimes freezing cold, and sometimes something is going to go wrong. It’s not a perfect world. That’s why shops that do oil changes keep new drain plugs in stock. Whenever we do an oil change if the threads or the head of the drain plug show any wear or damage it gets thrown out, we install a new one, and add $5 to the bill. Quick and simple, and avoids damage to the oil pan by using a damaged drain plug.

There are also usually easier and cheaper ways to repair a damaged oil pan than replacing it, as has been noted above.

If the shop “glued” the plug in get the car to a new shop quick. As far as replacing the pan it depends. If it is a steel pan and has had an oversize drain plug installed there may not me enough metal left to install a thread insert and would require replacement. If that is not the case it most likely can be repaired with a timesert. Timeserts are the best repair method.

Ase, I have to totally disagree on this one. The oil plug and the threads in the bung hole are covered with oil when the plug is put in. Installed with proper care to get the threads to mate right, and not overtightened, there should be no reason a plug or a bung hole gets stripped out. If the threads were dry, I might agree, but not covered in oil every time. I’ve owned cars for hundreds of thousands of miles changing the oil every 3K to 4K and have never in over 45 years stripped a plug or bung hole. And I’ve never had one wear out.

I guess it depends on one’s definition of “wear.” As opposed to “abuse.” In my book, all the drain plugs I’ve seen that needed replacing had been “abused,” not “worn out.”

I used a self tapping oil pan plug for 6 years on a used car I bought with the original threads stripped. Just make sure you have a good sealing gasket. Never had a leak. Agree with everyone. In general as far as oil pan bolts that get turned on and off so often, you should torque them or have a good feel for tightening them.

Personally, I’ve never seen a worn out drain plug. Even the plug on my old 420k miles Mercury wasn’t worn out and I can’t even begin to count the number of ins and outs on that plug.

My antique Harleys (68 and 64 years old respectively) have an assortment of drain, timing, and fill plugs that are still like new although I can only trace their history back to the mid 70s when I acquired them.

I’m sort of in the camp that oil drain plugs do wear out - except to say, I’m sure that many, many more are damaged than are worn out. All my vehicles have only had their oil changed by Moi! I’ve had to replace several plugs. Thank goodness for the oversized self tapping replacements.

Also, much of the problem is leakage, not thread damage. A bit of grit in the mating surface can really screw up the seal.

I’m in the camp of abuse, not wear. I’ve had several used, some abused, cars, some with steel, some with aluminum pans. Only once did I have stripped threads. And, it was a VW I acquired that had stripped threads when I got it. That one was an easy swap of the sump cover to fix.

I agree that somebody–perhaps not the shop that recently performed the recent oil change–was responsible for cross-threading or over-tightening that drain plug.

In addition to simply using too much force when reinstalling the drain plug, another possible cause is failure to use a new crush washer when doing each oil change.
In an effort to save…maybe…20 cents per car, some shops (and likely ALL quick lube places) choose to re-use the old crush washer. In addition to leading to oil seepage, this penny-pinching practice also allows the drain plug to be over-tightened.

These shops (and quickie lube places) will also try to compensate for a crush washer that can no longer do its job by simply tightening the plug tighter, even getting a longer wrench if necessary. The theory is “if it drips, tighten it more”. That’s a step beyond “allowing” the plug to be over-tightened, that’s an active over-tightening activity.

There are any number of ways that a drain plug can wear out during normal service. A piece of road debris could hit the head and round off a corner. The threads could pick up some grit or be damaged as the drain plug drops into the drain pan and/or bounces around in there. The drain plug sealing washer–which is not replaceable on many drain plugs–may be worn and compressed with age putting additional stress on the threads.