Some classic car and motorcycle fun on the beach

NJ’s annual Race of Gentlemen features vehicles manufactured prior to 1935. While the photo captions don’t identify the cars, it appears that most of them are vintage Ford V-8s. 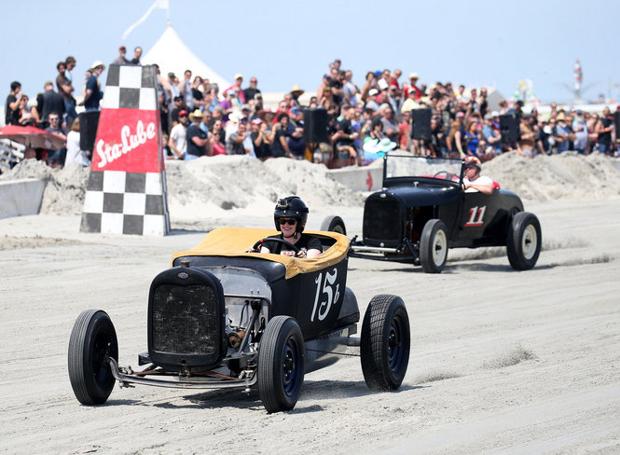 Vintage automobiles and motorcycles race along the water's edge in Wildwood throughout the weekend.

Chasing Classic Cars did a show featuring this race. Looks like a lot of,fun.

I loved those old vintage rods that were actually driven and raced. I never had much interest in those totally pimped out, over chromed, garish kustom kars that only go to car shows on trailers.

Got a replacement leather fringe jacket, so I can play easy rider as I am working on getting a triumph contingent in the 4th of july parade I dunno, but I think you need something more true to the rat-bike spirit.

Sorry about first impressions @B.L.E. but that looks like a scary ride! prefer my trumpet!

Gear shift on the right side, Edward Turner would approve.
Looks like the single carb Tiger model, correct?

Yes you have it right, @“B.L.E.” 650 cc, Bonnevile had twin carbs. Now I have to google Edward Turner, and find my whitworth wrenches, clutch on the left hand control also, front brake on the right, or do you prefer break yikes the spelling around here is so bad!

Barkydog: I had a 1966 Bonneville. Shifter on the right, rear brake pedal on the left. Those Brits get everything backwards and drive on the wrong side of the road LOL. My last bike was a Yamaha 650. To the Triumph like my Miata was to my MGB and MGAs. You have a nice bike. I gave up in 1993. I grew tired of being “invisible”!

@sgtrock21 you remind me of the car I did not get, 68 mgbgt, took too long for the financing, bosses car, oh well. Every one else is dancing in the wrong direction, does not matter, every car these days, where are the brights, the wipers, what I have to push a button to start the car, one time hit the wrong button on the fob for a new car at work, the car started, now how do I turn it off?

The old 883cc Harley Davidson Sportsters of the 1960’s also had right shifters and left rear brakes.
I’m pretty sure the old flathead K models also were that way, this was the engine that morphed into the Sportster (XLH and XLCH models) when it converted to overhead valves.
The KR and XR bikes were Harley’s flat track racers and having the shifter on the right just made sense on an oval dirt track where you were always turning left and your left foot was wearing a steel soled skid shoe.

B.L.E.: The first Harley I rode was in 1970. It was a buddies 1952 Panhead chopper with the “suicide shifter”. Foot operated shifter on the right makes perfect sense for left hand circle track.

That “rat” bike is scary looking. It has some advantages if you’re brave enough to ride it-

It never needs washing
It has virtually no chrome to polish
You can leave it anywhere with the key in it, almost no chance of someone stealing it
If it gets trashed how could you tell?

I love the horse saddle seat on that bike.

Damn… I knew this was coming up and I missed it… and I didn’t miss it for any good reason either… Aarrgh!

That rat bike looks even worse than the rat Harley I rode back in the 70s. It was 40 years old so being a bit rough around the edges is to be expected.

In spite of looks it was dependable. One weekend several guys at the local bike custom shop planned a several hundred miles road trip to a lake along the TX border. About a dozen bikes (all clean and shiny with tons of chrome) were going with about half the guys taking their wives and girlfriends.

I caught a lot of grief in the parking lot about whether or not “that POS will even make it to the city limits”.
My bike and one other bike are the only two that made the trip sans problems.

One guy riding beside me on the Interstate with his just put on the road custom bike yelled to me that his bike was handling funny.
I yelled back that it was probably because the frame was breaking in two on the front downtubes.