We have a 2006 Silverado 1500. Front driver and passenger front doors are stuck closed. Do not open from inside or outside. driver side was not slammed shut, passenger side was. Key goes into the driver side door and turns but doesn’t feel like it’s turning all the way. Pulling the door handles feels normal, they aren’t loose or flimsy as if something is detached. I did take the top off the door lock, used a pliers to pull it up as hard as I could and tried to open the door from both inside and outside - neither worked. In the course of going in and out the back doors the driver side rear door suddenly wouldn’t shut either! I decided that yes, the latch not disengaging seems to be the issue. Dry lubricant completely solved that issue, moves easily opened and closed now.

it seems strange that both doors have the same problem at once. I think this is an electrical problem. first check your fuses and relays for the door. then I would check the master switch on the driver’s door.

What’s your weather there? Are you sure the doors aren’t just frozen?

Did you manually pull back on the door locks on the inside of the front door panels?

You do not need to remove the whole door panel. You can pull off the manual door lock panel separately and pull on the linkage. You can then remove the trim around the door latch and access the linkage for the door latch and pull on it. Worse case, with the rear door open, there should be access to the inside of the B pillar where you would have to get a dremmal size grinder with a 1" cutoff wheel to cut out the strike plate.

Had a similar incedent on the passenger side front door (2007 Silverado Classic, same as 2006) after a minor accident moved the A pillar on that side 5/64" further forward putting tension on the strike plate. Unlatched the door and kicked it open from the inside, then shimmed the strike plate out with a couple of washers.

Thank you, didn’t even occur to me that fuses could be involved. I should clarify that the front passenger door got stuck shut last summer, the driver side door is the one that recently did it so it wasn’t at the same time.

The temperature fluctuates between 0 and 50 right now, it’s insane! But I don’t think it could be that as the passenger door got stuck in summer and we had it in a heated garage for a few days to see if something was frozen.

I had no idea I could get to these places without taking the whole panel off. I had previously manually pulled on the driver side door lock by taking the little cover off of it. I used a pliers to pull it up because it was suggested that maybe the locks weren’t unlocking completely. That didn’t do anything though. I will give all of these suggestions a try, thank you all so much!!

Not really important but it not necessary to reply to each person as we all can see your posts. 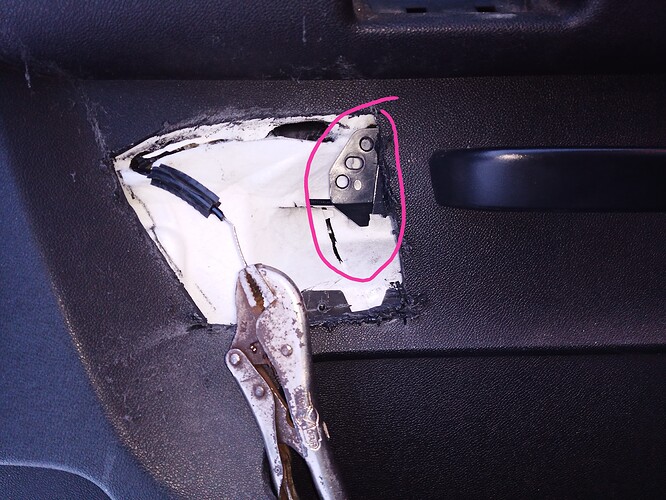 IMG_20220130_1744597000×5250 2.95 MB
Just an update - pulling back on the top of the panel as far as we could we (meaning my dad did this while I held the light lol) were able to tell that the cable was the problem. He did end up cutting into the door panel, just enough to get where we needed. The cable wasn’t broken but the piece behind the handle is. Have no idea what it’s called so if the pic shows up it’s the part circled in pink. In hindsight we would have been better off not cutting so far over to the handle because that piece needs the panel for support I think, but when I take the panel off and fix everything I’ll reinforce that piece that was cut out. For now the door opens from the outside again and opens fine using this pliers and just pulling the cable. Assuming this is the same problem on the passenger door we will do that one when it’s warm out!
Emily