Should car be totaled?

So I was in a wreck a couple days ago. A 2500 Chevy truck hit the front right passenger side fender and pushed my hood all the way over to the other side. The car pulls to the right when you drive and brake and can feel it catch in low gear and while breaking. I don’t know much about unibody cars. I want it to be totaled because I don’t feel save driving it. The estimate to fix it is $5,200 and that’s not with them looking a suspension or anything like that. The cars market value is 14k. Here are some pictures. And what should I say to adjuster to try and get it totaled. He will be here on Monday. Thank y’all. 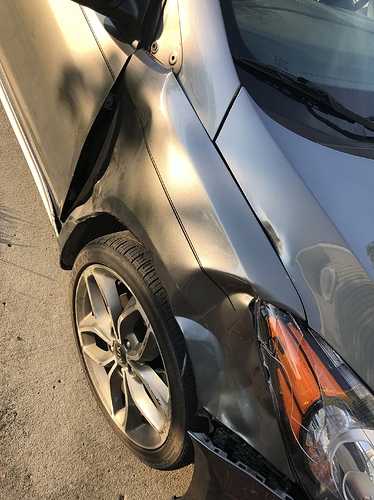 It depends if the vehicle is paid off or not.

If not, you have no say if the vehicle is totaled or not. The people that still hold the title to the vehicle have that say.

So, you can end up with a vehicle that was almost totaled, but still make payments as if nothing happened to the vehicle.

If you own the vehicle outright, then you can have the insurance company to value the vehicle so you retain salvage.

This means you keep the vehicle, and accept a check that reflects the cost to repair the vehicle on your dime.

The other insurance company has already claimed fault and I have gap to cover everything else. It just completely drives terrible now.

Given the numbers you’ve presented, best to have it repaired imo. Body shops fix that sort of damage all the time. Use a repair shop recommended by your insurance company if you want some extra assurance.

Of course it drives badly now. It was just in a serious accident. If the insurance company wants to fix it, they will fix it and you don’t have any say in that. You do not have to accept it when it is returned to you. If it does not drive right, return it and have them address your complaints. Keep doing that until it drives as well as they day before it was wrecked.

I have gap to cover everything else. I

Gap insurance only is for a total loss and only covers what you owe after the insurance pays the lender.

If you are afraid to drive it after it is fixed, simple solution, sell or trade it for another car.

There is no reason why you can’t have an independent shop, of your choosing, assess the damage and tell you the story. Body shops are in business to work on cars in just this situation. They will be delighted to have you come for an estimate. After the adjuster looks at it tell that person you will be taking it to another shop for a second opinion, and will get back to them shortly for a decision. And, be sure to make it clear to the adjuster that you need them to agree to pay for a rental of a similar car until yours is fixed.

The shop you choose to look at it will help you arrange to have it moved to their place if it can’t be driven.

Everything is negotiable. Everything. Don’t sign off on anything until you understand it and you are happy with it.

The repair cost would probably have to be over $10k before the vehicle would considered totaled. Even if they go over by $2k, it’s still well within the realm of being more cost effective to fix. Obviously since it’s been in an accident and not repaired yet, it’s not going to drive very well. That complaint really isn’t a valid one right now. If it doesn’t drive correctly after it’s been fixed, then you can complain to the insurance company.

And what should I say to adjuster to try and get it totaled.

As it sits, your just about at 50% of the cost of getting the car totaled. It’s going to take quite a bit of extra work to get you over the threshold, probably an unrealistic amount. The adjuster probably isn’t going to total it just because you want it to happen. There has to be a quantifiable reason to total a car. The car is most likely going to be fixed, if you decided you can’t live with it after that you can sell it. To me this sounds a bit shady. I’m just speculating here, but it sounds like you don’t care for the car and would rather be in something else, or you’re looking to get out of car payments. No offense intended, but you seem to be determined to get this car totaled despite the numbers suggesting that it’s nowhere close to being totaled.