My co-worker has a 2wd Mazda B2300 pickup truck (clone to Ford Ranger) and has added concrete blocks to the bed for traction. I know that this is good for traction in the snow, but these blocks will become projectiles aimed for the back of his head in a crash.

What is the safest way to add the weight without creating a dangerous situation? Loose sand? Sand bags? I am a car guy, not a truck guy.

Is this a FWD or RWD truck?

Remember that adding weight does not cure all problems and it does add other problems.

Short of extreme measures to anchor the blocks in place to the frame, the recommended practice is to use something that disperses energy on contact. Bags of double wrapped tube sand gets the nod from most. It’s very cheap insurance and I have bags over 15 years old and still in tack. Move them in and out as the need arises.

Though I’ve never investigated an accident where a block went through the back of a truck, I did do one that rolled over and hurled a block into an unattended parked car…the car looked like it was hit by an unexploded “rpg”. It was obvious it could go through the rear window in a head on; let alone the passer by and anyone else. BTW, the blocks were in a wood frame over the axle. I don’t know the outcome but his insurance company was aware of this from the accident forms I filled out. It would be worth asking an rep. about such practices. My feeling is that it doesn’t matter…until some one is seated in that parked car. Then I’d worry about their’s.

We all carry un-anchored stuff in our PU that could be dangerous, but carrying these things as a matter of course all the time, forgetting they are there and driving like they aren’t could be a problem at the worse time.

And as Jos. implies, I agree that you only add what you think you need and not compromise your overall weight capacity when you start loading it up with other stuff.

I used barbell plates and built a frame out of 2x4’s to keep them directly over the rear axle of my Dodge Dakota. The frame was two pieces of wood in front and behind the rear wheel wells and two short pieces to connect them. The barbell plates probably weren’t the best idea from a safety standpoint, sand bags would be safer.

Go around town and offer to shovel people’s driveways, then shovel that snow into the bed of the truck. If you live in an area that’s gotten a foot or more of snow already, then you shouldn’t have any problems filling the bed up, just pack it down as you go along.
Not only will you have weight in the back, you’ll probably make some extra cash along the way as well.

Sand bags sold everywhere are the most common solution I have seen. A board behind the wheel wells to prevent the load from sliding forward could be helpful. Concrete blocks sound like a recipe for disaster.

A big plastic bed cover will help contain the projectiles. As far as safe goes, I wouldn’t know safe from sorry until the sorry part came around. In an 84 F-150 I had three pallets, six mounted tires and two sandbags. That and 150 pounds of snow made for great traction but I had some leaning on turns.

Tom (or Ray) once mentioned on the show that his method was to load up the bed with split firewood. I guess he had a fireplace or wood stove, and at the end of the winter he stacked the wood in the woodshed to dry for burning the following winter.

Another method I used was to buy a few bags of gravel for my Tacoma bed. Then when winter was over, I broke open the bags and spread the gravel behind the house on the path to the woodshed. That way I didn’t have to store the gravel in the garage over the summer, and it went into the construction of something useful.

Using 2x4s and 1/4" ply wood I built a rack. I ran two 2x4s longitudinally the length of the bed and two transversely, to a width measured to hold patio blocks, at a position to hold them just fore of the rear axle center. Using decking screws, I screwed a plywood bottom to the 2x4 frame and, after adding the patio blocks, a top. The longitudinal 2x4s and the lid prevent the blocks from moving forward as projectiles, and keep them where they’ll do the most good. The patio blocks are dense enough to add weight without too much height, and the plywood lid also creates a usable “second floor”.

“Using sandbags is the safest way to add weight to a truck bed for traction. Cement blocks, for example, can become flying hazards in case of a collision. They can also damage the bed of the pick-up.”

Read more: How to Add Weight to a Truck Bed for Traction | eHow.com http://www.ehow.com/how_5828532_add-weight-truck-bed-traction.html#ixzz1C4k7reRT

This is the common sense advice of every reputable automobile reference publication that I have seen.
“Depleted Uranium” could work but it still isn’t recommended.
A legit alternative though. http://www.squidoo.com/shurtrax

I would use hay bales, sandbags, or something of that nature and anchor them down. In the event of a crash these things would likely disentegrate upon impact but even that’s not a given.

Many years ago while on the way home from work on a cold, dark winter evening I came upon a wreck on a 2 lane highway. The state troopers and EMTs had not even arrived yet.
Some drunk fool tried to pass a pickup on a hill and met a Ford Ranchero head on with a combined closing speed of about 130 MPH.

The guys in the Ranchero were roofers and had several 5 gallon cans of cold roofting tar in the bed, or at least they did. Those cans had become missles and several of them not only broke out the back window, they also physically split open the sheet metal in the back of the passenger cabin. There was nothing inside the Ford but blood and tar.
At least both guys survived although they were in about as bad a shape as a person can get. One spent 2 weeks in the hospital and the driver spent about 2 months.

Home Depot and many hardware stores sell 60# bags of double wrapped “tube sand” made for the purpose…About $3 a bag…But there is a price to be paid for carrying extra weight around all winter…Here in Denver, the roads are dry 95% of the time. I remove the ballast unless it’s needed…

I was looking through a Summit Racing catalog and saw this, 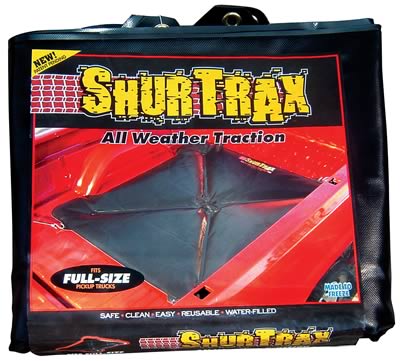 Find ShurTrax Auto and SUV All-Weather Traction Aids LW-0036 and get Free Shipping on Orders Over $99 at Summit Racing! Designed to fit all performance automobiles, SUVs, vans, or any other vehicle, these smaller ShurTrax traction aids combine all...

Looks like a water bladder that lies flat on the bed.

Never mind, looks like Dagosa beat me to it.

I stack oil-dri at the tail gate. The weight seems to help and if I get in ice throwing the oil-dri under the rear wheels seems to help me get moving. But ice is rarely a problem here. We’ve had 3 days so far this year with ice on the roads and that is above average.

But then, I use a lot of oil-dri anyway.

The safest way is axle weights. These are weights that bolt directly onto the axle. They can be removed if you do not need them. The are put on with U bolts. When I bought mine they came in 50, 100 and 150 lbs.

When I had my 57 Chevy pickup I had 2 100 lb weights. One on each side of the axle. The rear end of that truck was so lite that I could not floor it. When I did it would just sit and spin, even going down hill.

Not only that, they don’t affect your load capacity weight wise or volume wise…good suggestion. This is much like the loaded (calcium) tires on tractors and wheel weights.