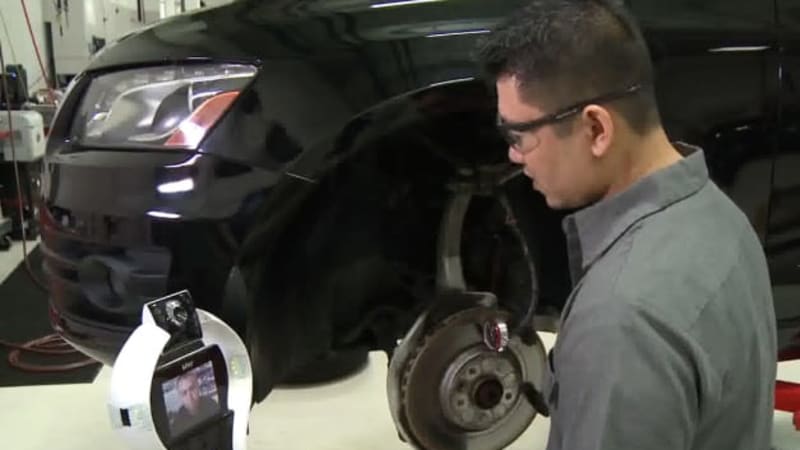 Audi to use this telepresence robot to fix cars

Next time you take your Audi in for service, watch to see if a little white stand is following your mechanic around. It's not some new measurement tool for your car; it's a actually a robot being controlled remotely to improve vehicle service. While...

Wonderful. Apparently Audi has zero trust in their service technicians and their shop supervisors. I’ll bet the technicians are thrilled. I wonder if the fax machines are being burned up from the techs faxing their resumes.

Talk about people looking over your shoulder-“will you just go get a cup of coffee and let me get this thing done?”

I’m not a mechanic, but the same engineers that wrote the repair manuals will be the ones advising the technician? Like the emergency room doctor told me once, “sometimes the symptoms don’t follow the book”. I guess having a hotline to the manufacturer is not such a bad idea but this just kinda looks silly.

I hope these are meant for situations where they need to inform Audi itself of a problem or to get better information about how to fix the particular issue. Otherwise it won’t make many friends in the service dept.

It could be a good or bad thing. That’s why they are testing it. Not every mechanic is a master mechanic and having a few more master mechanics available to discuss issues with the mechanic on the floor and even see what the mechanic is looking at doesn’t sound all bad to me. Identifix makes a good living doing this, but they don’t have the camera.

At the moment, I’m somewhat negative about the “telepresence” thing

There could be one possible advantage, though . . . and only if the guy on the other end is willing to play fair

If the car needs a “secret fix” that only the manufacturer knows about, and even the technical website doesn’t have information yet, he could tell the mechanic what to do . . . before the poor guy wastes time, for which he won’t get paid

When I was at the dealer, there were plenty of fixes which were so secret, that unless you knew the correct guy at the manufacturer’s end, you had 0% chance of figuring it out on your own. And it usually took months before any bulletin, document, etc. was generated

I will say one thing . . . I’m pretty decent at diagnosis. And I would talk to the other mechanics in the shop, or a shop foreman, before I let that remote thing follow me around.

No ‘robot mechanic’ there, it’s just a way to link to an Audi HQ technical rep., right?

Well I have a different view on this.

My company designs some pretty technical telecom equipment and sell it all over the world. We do have technicians in the field…but a good number of times they are calling back in for support. And several times we’ve had to send engineers out to help with the fix.

I’m not so sure the Audi-bot will be used ALL THE TIME…but only when there’s a problem the technician has troubling solving…or for a troublesome vehicle that’s been in the shop 2-3 times for the same problem. I seriously doubt they’ll be using it for any routine maintenance…

I see it just another tool to help the technician. Nothing more. I actually like the concept.

I’ve worked with people that don’t like to let the mechanics diagnose anything. If the mechanic spends more than 5 minutes on diagnosis . . . which is quite common . . . they take over or send the “yes man” over to help

When the mechanic’s boss/supervisor constantly butts in and doesn’t let the guy develop some diagnostic skills, he’s doomed to stay a parts changer his whole career

I’m sure plenty of the wrenches on this website know exactly what I’m talking about, or have even been in that situation

When I worked for a large company designing CT and PET scanners, we designed in all kinds of support tools to aide in diagnosing faults on the machines. The service techs could handle almost all issues that came their way but occasionally, like any technical product, there were the real stumpers. Then they could request technical assistance.

A design engineer was the last option after exhausting field service and manufacturing engineering support. If it was escalated to design engineering, an electronic assist request would pop up on your desktop. The software was designed to allow eavesdropping to watch the diagnosis in the same manner as the local tech was performing or they could relinquish complete control to you remotely from anywhere on the planet. I could exercise the machine using the standard toolbox or even download custom diagnostic software to run remotely. There were quite a few times where this level of support helped to diagnose and fix a real perplexing problem that probably would not have been able to be fixed without flying out a technical resource at great expense.

Certainly, the complexity of the machine and downtime costs justified this kind of support avenue. However, technology has advanced enough that this kind of approach is now viable for less sophisticated systems at reasonable expense. It makes good sense to use it.

There will always be people who fear it could be used for nefarious reasons. However, the alternative viewpoint is someone working at flat rate on a tough problem is likely to welcome the assistance of a technical resource that might help you fix the car within the allotted time thereby saving your bacon so to speak…

But every time I lost my bacon, I actually learned a lot

Even though my paycheck was lower, I learned valuable skills, which came in handy later on

For me, it’s much harder to learn something, if somebody else is doing all the thinking

Of course, there were times that I simply couldn’t figure it out, because I wasn’t experienced enough, was thinking about it the wrong way, didn’t have the inside information, etc.

I’m concerned that some mechanics will rely on it too much, and will never develop strong diagnostic skills

Over the years, I’ve known plenty of mechanics that don’t like hard care diagnosis. They ALWAYS asked somebody for help, after a mere 5 minutes. Consequently, they were lost when that other guy had the day off. I think it’s important to be able to stand on your own 2 feet. What was perplexing was that these guys were smart enough to figure it out on their own, if they had a “can do” mindset. They always would tell the other guy “Don’t explain it to me. Just tell me what part I need to replace.”

I think they could have picked a better example for their video though. He was looking at the brake rotor and checking run out. I mean how complicated is that? What could ART tell him that isn’t pretty common knowledge even for a non-mechanic like me. It would have been far better to have him plugged into the computer looking at the sensor read outs or something that may be more elusive. But then ART isn’t tall enough to see over the fender-a problem I also have.

I think it may really be a way for “corporate” to see what is going on in the shop. Just imagine that robo spy being controlled from somewhere else taking in everything that is going on around it as it just happens to be also assisting some tech with a problem.

I liked the idea of the little guy being “accidentally” backed over as he scoots from stall to stall helping out.

@db4690
I certainly agree that something like that could be “abused” to the point of dependence. The people inclined to do that probably already are doing it, just with the shop guy that puts up with it rather than a tele-presence expert.

In fact, that could be the ultimate goal of the corporation in developing such a platform. Manufacturing operations are increasingly relying on more sophisticated test systems so they can reduce the technical skill level of the employees required to operate them. Same for building product. Snaps together, a monkey could do it. Reducing labor costs is the ultimate goal. That reality is likely to be propagated to other areas.

Now envision the car repair center of the future; non-skilled labor directed by a robotic expert that flits from one repair bay to the next. The career path of being a skilled mechanic is doomed to a precious few that sit in remote bunkers and direct low wage minions to do the actual wrench turning…

There’s robot surgeons, so robot mechanics seem plausible at least. Robots have certain advantages I guess. Like a robot can have more than two arms and two hands. So a robot with 5 arms and 5 hands and with 5 wrenches it could tighten the wheel lug nuts all at the same time, avoiding having to worry about the proper tightening sequence.

I can hear the thing now

You have just 3 more minutes to finish this brake job!!!

You’re going for another cup of coffee!!!

A half can of brake cleaner in the speaker will shut that thing up.

Where did I put that flour sack? Oh, I guess ART’s wearing it.

Other than agreeing with db4690 about dumbing down the mechanics, I could see a number of problems with those bots.

The VHS Slo-Mo pace at which everything is moving and costing the mechanic time; a.k.a. money.

What happens if the Bot says do this and the car is not really fixed; only to return the next day with the same complaint. Think the Bot will get flagged for a comeback…

The very good odds that the mechanic in the shop is more knowledgeable about the problem than the guy on the other end of that Bot who may do nothing more than repeat a standard script.

People complain about high dealer service prices. Those Bots (20 grand each?) along with the tech support will quite likely be billed to the dealer service dept. Guess who pays at the end of the line; the customers and/or the mechanics.

The possibility that the Bot will be used to spy on employees. What if the mechanic is leaning against a workbench with a cup of coffee and staring at a car in the stall. Slackard mechanic or deep in thought on a weighty problem…

The Bot providing scan info to corporate who then tells the mechanic it could be A, B, C, or D. Tell the customer to pony up for going through them all. That should work well.

Say Bot, take a look underneath at this control arm bushing as the mechanic inadvertently stumbles into the DOWN lever on the service lift…