I have a 2001 VW Passat wagon that now has 120,000 miles and the dealer said at the 115,000 check that the car would need to have the engine motor mounts replaced and estimated the cost at $700. I have not heard this before with other cars that I owned for longer than 10 years and many more miles. Is this a possible repair? He said I would not pass my vehicle safety inspection required by our state unless I replaced the engine mounts.

It’s certainly possible, I had to have mine done on an ES300 a few years back. Whether yours needs them can only be determined by a mechanic, find a decent independent VW mechanic (google ‘mechx’ for the cartalk mechanic finder). Are there any symptoms?

I would get a second opinion. While it is certainly possible that the engine mounts need replacement, it’s fairly rare for a safety inspection to cover much more than lights and brakes. That he tacked this on at the end sounds like he may be trying to scare you into giving him money. Take it to a second mechanic, and see if they agree.

This is good advice, thank you. I am not sure what symptoms I would note. The car drives and runs like all is well.

I don’t know about all states, but PA & NJ fail you for broken motor mounts. I’m sure many other states are the same.

I found out about mine when the plastic radiator tank cracked where the top hose attaches, caused by the engine rocking back and forth. Once the mounts were replaced, I noticed that the engine felt a lot smoother.

Again, good advice especially since I may trade the car in Fall. Thanks.

I have a 2002 Passat 1.8T Sedan. I changed my left and right engine mounts before 75k miles and my front (snub) mount at 75k. I know it seems like most cars get a lifetime out of engine mounts but not Passats. The left and right engine mounts are hydraulic and mine leaked the pink fluid when they went bad (common). If you or whoever changes your oil sees the pink stains beneath the mounts, they are bad. The front mount is rubber and mine started crumbling around 75k.

NJ’s new Governor, Christopher Christie, recently ELIMINATED vehicle safety inspections, and the only inspection that is performed now is an emissions check every…three years, I believe. So, no, NJ does not “fail you for broken motor mounts” anymore. Nor do they fail you for bald tires, lack of brakes, or any other safety defects that might be observed while the vehicle is at the state inspection station.

The state’s largest newspaper recently interviewed some employees at the state inspection facilities, and they expressed dismay about having to handle cars with tire cords visible through the tread, and with essentially no braking power left, but not being able to do anything about these serious safety defects. Bear in mind that NJ is the most densely populated state in the US, with a very high vehicle density on the roads. All of this bodes very poorly for the safety of state residents.

The stated reason for elimination of the safety inspections was to save money for the state budget. Analysis of the situation yields the following information:

The state saves approximately $3.00 per car, every two years, by eliminating safety inspections.
The portion of vehicle registration fees being “saved” is being transferred to the general account, thus making this an additional tax on drivers–from the Governor who stated that he would reduce taxes. So far, only those making over $250,000 per year have seen a tax reduction. Everyone else has seen increases in taxes and fees of various types.

If our esteemed Governor’s full privatization plans are put into place, the currently free emissions checks could only be done at private garages–for a fee of about $75–while simultaneously not reducing vehicle registration fees. This amounts to a tax increase on motorists, and the “money grab” from motor vehicle accounts would add up to tens of millions of dollars over the course of just a few years.

If you want to read what Conservative columnist Paul Mulshine had to say about this “shell game” involving auto inspections, take a look at: 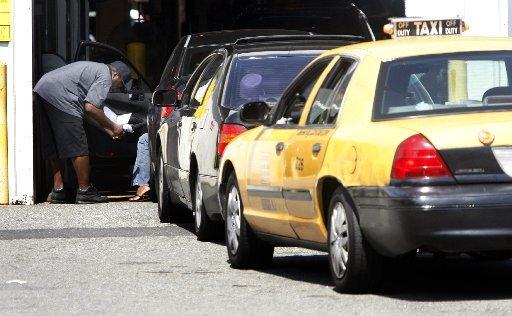 Ed Murray/The Star-LedgerA line of cars enters a state auto inspection station in Newark on July 31, the last day that safety checks were included in the inspections. Only emission inspections are still required. My car was due for inspection...

So far, Christie has caused my overall tax bite to increase by over $1,100 in just one year, while services have been drastically reduced. Recall petitions are being circulated statewide, no matter what pro-Christie propaganda is being spread by the GOP nationwide. This guy is being taken around the country as “the darling” of the GOP, in the hopes of him achieving higher office (hint, hint) in 2012. Everyone whom I know is hopeful that this will actually happen in order to rid our state of this hypocritical jerk.