… was extremely accurate, but they didn’t specify when these features would become commonplace.
I suggest that you zoom the image to 200% in order to read the text. 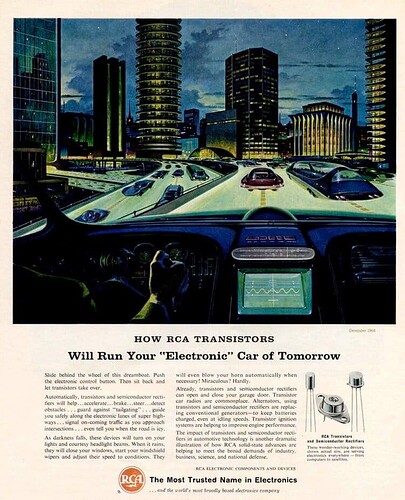 I love it. Back then both RCA and Bell Labs were busy inventing the future. Right here in New Jersey.

… and sadly, they are both a part of history. The last fragment of RCA is the old Sarnoff Laboratories, now named SRI International. Most people owned records that were made at the RCA factory in Camden, but it’s long gone.

The building is still standing, but it’s apartments now. A friend of mine lives there. It still has the stained glass windows with “nipper” the dog in the tower.

Back in 1957 as a high school student, I bought a one transistor radio kit from the Allied Radio catalogue. This radio kit had the latest features: a transistor and a printed circuit board. The radio would pick up only the local AM stations. We had discussions back then as to whether or not the transistor would replace the vacuum tube in radios, televisions, and high fidelity equipment. As I remember, the transistor was developed in Bell Labs about 1949.
It’s been years since radios and televisions had hand wired chassis and vacuum tubes. I could repair my television and high fidelity equipment back then just by obtaining a schematic wiring diagram and using my vacuum tube voltmeter. I bought an inexpensive flat screen television for our sun room at Target. It quit functioning and I had no idea how to repair it. The set was under warranty, but I would have to pay the shipping charges to an authorized repair station. I debated as to whether to ship the set to an authorized repair facility or just junk the set. I called the 800 number in the owner’s manual. I didn’t have to ship the set. A technician was dispatched and arrived at my house within an hour. He spent 10 minutes replacing the circuit board and another half hour playing with our dog. When I asked him if he had ever worked on the old cathode ray tube televisions, he said he had never worked on one and would not know where to begin. He said that the high voltage on the picture tube made them too dangerous to repair.
To my embarrassment, I have let up to date technology slip away from me. About the only thing I do with our vehicles is check the oil and the air pressure in the tires. I used to be able to change fuel and water pumps, replace spark plugs and ignition points. I rebuilt the carburetor on my 1950 Chevrolet pickup. Today’s technology has passed me by.

Interesting post from the past. It is always fun to see the predictions from 50, 75 or 100 years ago…

But where is my jetpack?

Ive kept up with the electro-mechanical basics, but the modules and PCM are beyond my ability to fix. Ive rebuilt one electronically controlled automatic transmission, not that different from the old ones.

high voltage on the picture tube

Yes we used to have a jumper to discharge the crt, dangerous stuff! Probably worse then getting shocked by a spark plug wire, the jolt stopped at my elbow!

Speaking of RCA anyone from the NOVA area out there remember this, off Lee Hwy. in Merrifield VA? 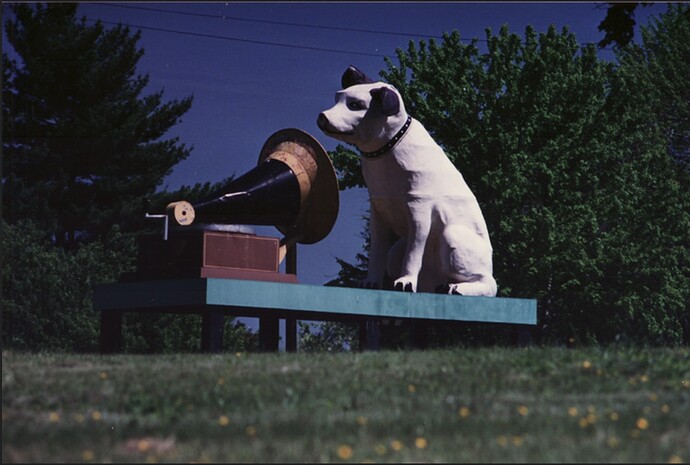 image1351×911 263 KB
This “Nipper” was originally atop the RCA building in Baltimore, privately purchased and put on display in Merrifield, was the sold to a museum back in Baltimore.
jtsanders December 11, 2022, 2:11pm #10

But where is my jetpack?

Interesting photo, thanks for the post. Those transistors were probably quite expensive back in 1964. As I recall a typical transistor (like the one shown on the right) cost about $20 each, in 1960’s dollars. Too expensive for my home-brew experiments in other words. But I had a relative who worked at a computer manufacturer and he was able to give me one occasionally that he got in the company’s surplus-equipment sale.

RCA would be the earliest company to have 12 volt CMOS integrated circuits. While the transistor gates have changed from metal to polysilicon, and of course the sizes have become significantly smaller, the same general physical principals apply to forming logic gates that are used today.

I want a jetsons car

I agree the fundamental principals are still at play in legacy chip fabrications but the industry has not stood still. There are many new materials being used that offer significant improvements over what came before and there are new ways of constructing gates that have made even bigger strides in performance. The company I work for designs and builds subsystems for the big semiconductor fabrication machine industry. We are involved in all aspects of wafer production including deposition, implantation, lithography, metrology etc. Here’s a neat explanation of one aspect of how things have changed over the years-

What is a gate-all-around transistor – Stories | ASML.

Thanks for the reference. I designed custom and semi-custom ICs in the 1980s so I am a little bit old now.
Only worked on ICs made in planar fabrication. The fin transistors and GAA transistors are new to me. I guess they are required because of the shorter channel lengths. These would be useful in digital circuits where smallest size matters. Analog circuits are likely still using planar transistors I would think and keeping their gate sizes to avoid anomalies. You can enlighten me in that regard if you are working on fabs for analog chips.

I often wonder what the world would be like if transistors stayed as discreet components. No small computers and no pocket calculators. Solid state ignition with some analog timing advance and control would be about the limit for vehicles.

I often wonder what the world would be like if transistors stayed as discreet components.

One downside, there wouldn’t be a Car Talk forum. 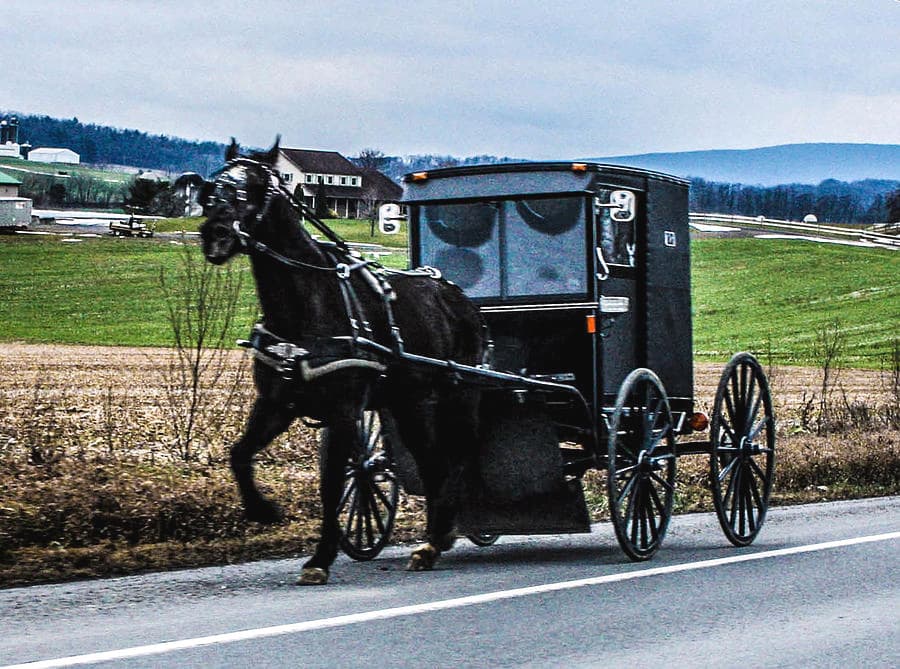 if transistors stayed as discreet components.

An iPhone would be the size of an apartment building.

We would stuck in the late 70s as far as electronics go! Rotary dial telephones would be in homes! It would be an amazing world to live in if you like adventure and you don’t like having to deal with the screenager generation.