Gentlemen, I could use your help. A very good friend and neighbor, with whom I bird watch and chat in my yard on good weather days, asked me about power packs today. Never having had or needed one, I was unable to offer any advice other than discussing useless stuff like lead-acid vs. lithium-ion and junk.

Your thoughts on the subject are welcome.

For what application may I ask?

I don’t need one but a family member has one he got from Amazon that is rechargeable and will not travel without it. He claims it is safer to use than jumper cables.

I agree with your family member. Less accidental hydrogen ignition worries. On a late, dark night in a downpour it can be easy to make a mistake. Power packs have on-off switches. Jumper leads don’t.

Has he used it? Do you know what kind it is? Has it worked well?

Sorry I don’t know the brand. Yes he has used it several times. His dopey son gets in the van and leaves lights on and doors open while playing on his lap top.

Sounds like a good solution for him. I never used mine, it lost its charge.

Volvo, that at least gives me confidence that there is at least one power pack affordable to the average consumer on a budget will do the job. That increases my optimism that there are others.

Texases, you take good care of your cars. I guess all I can say is “me too”… that’s why I totally lack knowledge of portable power packs.

If I had one, it would probably be dead if I ever had to use it, besides, I have a manual transmission, and I usually park on a hill.

I guess I am getting old, when I saw power pack I was thinking 55-56 Chevys and what they called the 4 barrell carb option:)

LOL, that never even occurred to me. But it does bring back memories.

Hard to beat one of these babies… $65, an air pump, a trouble light, a USB port and lighter plug to charge your phone, built in re-charger AND jumper cables with a on/off switch so the jumpers are not always hot. AGM non-spillable battery inside. Hard to beat the utility and the price. I have one and it works great! 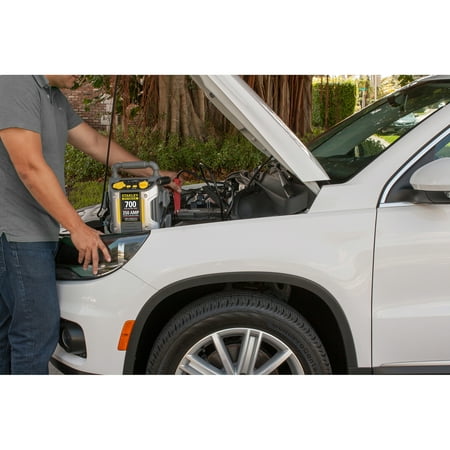 I still use a set of 40 year old jumper cables (premium set). All the power packs that I have seen lose their charge rather quickly. A guy I know at the local flea market has a dozen or so on his table and none of them work. The battery terminal clips on all of them look brand new so I don’t think that they ever had a chance to be used before they went bad.

Thanks guys.
That Stanley looks like it could do just about anything.
I wondered about charge retention. I guess nothing will hold a charge forever.
Which leaves me to wonder… perhaps charging times will be a factor. Perhaps he could plug it in once a week for a few hours.

At least now I have some information to offer.

A lithium pack should hold its charge for a long time, assuming its not kept in a roasting hot trunk all the time.

True - I stopped buying before lithium was a thing in the jump packs.]

That said, if it’s not kept in the trunk all the time, what’s the point of having it?

The lithium packs are small enough to go in the glove box:

I’d stay way from the lithium packs for now because of the possibility of fire and expense. They are the best type to leave on the shelf and ignore and the lightest. High temps experienced inside a glovebox in Arizona or west Texas in August could burn your car to the ground. Li-ion fires, once started, are pretty much impossible to stop.

My last AGM pack lasted about 5 years and died because I neglected to charge it periodically… and the age for sure. The Stanley recommends charging once a week even if not used or, if you don’t leave it in the car, leave it plugged in so it is always ready. Kind of like leaving a car on a Battery Tender.

The last time I had to be jump started by AAA, they brought over a Power Pack even though the tow truck had extended cables. The Power Pack did a masterful job of starting a Camary with a bad battery cell. I knew it was weak but I kept putting the replacement off.

One advantage of the Power Pack is that you don’t risk the electronics of the donor car in a Jump start. Consider the dynamics, the donor car is charging the donee car’s battery; the donee car cranks drawing the voltage down to 9 VDC of less; and then the donee car starts and begins charging so the voltage jumps high, not to mention any voltage spike of the starter solenoid releasing. This is in addition to misconnecting the leads or causing a hydrogen gas explosion.