What should I look for in a portable jump start pack?

I would like to get a portable jump start pack to keep in my 2001 Chevy Lumina. I don’t know much about them. I see that the less expensive ones have fewer amps than the more expensive ones. I don’t know how many amps I really need. It’s just for my personal use. I’m looking at ones in the $50 range like this one: 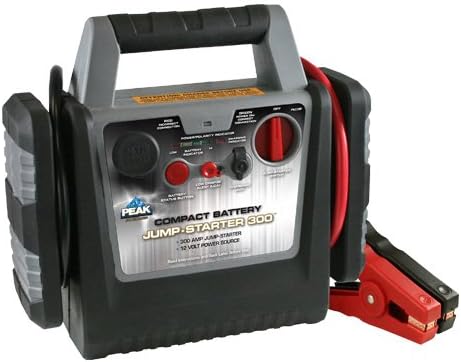 If you are wondering why I want one, its because about every 3 or 4 years when my battery dies, as it does, it dies suddenly, completely, and with no warning that I’ve ever noticed. This is very inconvenient when it happens. It would be worth $50 to $100 to me have a jump pack in the trunk just for piece of mind. I’m assuming they hold a charge for a few months and I don’t mind recharging it every few months.

Also, yes, when I get a new battery I have my mechanic check out my car to make sure everything is ok. Everything is always ok. The battery is just dead.

Get the battery replaced every 3 years and sleep well.

More than likely, you would forget to maintain the charge in your jump-pack and it would fail you too…Just another useless toy you don’t need…

Look at the peak amp rating. This dictates the number of attempts you get to get the engine to start with a dead battery when it’s 0 degrees. The higher the amp rating, the more expensive the jump pack.

Your batteries should last longer than that! We normally get at least 7 years out of a battery and we live in a cold area.

I would get the largest battery that fits from Costco (Kirkland) which will give you more reserve capacity. The Costco batteries are the same as Sears Diehard, a very durable unit.

I would say something’s not quite right here. My '01 Jetta is on the original battery, and so is my '04 4Runner.

There must be something happening that they die so completely when they do. Every single battery I’ve ever seen in a car dies a slow death, and even at the very end, there will still be enough power to turn on things like lights, etc, even if there’s not enough power to start it.

How about saving some money (and room in the trunk), and getting a set of jumper cables? There’s no battery to remember to charge, and most people are happy enough to pull up and give you a jump start if they see you with the hood up and cables in hand.

Do you often leave it sitting for long periods? What are your driving habits like? I use my vehicles at least 5 times a week, sometimes more. That also help keep everything charged and ready.

That 300 amp jump pack will give you one attempt to start the vehicle. Where as with this jump pack http://www.amazon.com/ATD-Tools-5928-1700-JumpStart/dp/B002J8RSLK you’ll get several attempts.

I know someone who bought a cheap jump pack. And it could barely get their lawn tractor started when the battery died.

I bought one from Walmart (EverStart brand) about 10 years ago that is still working fine. I bought it to jump start my boat, which it has done serveral times successfully. It isn’t a small outboard but a ski boat with a 351 ci V8. I’ve also needed it several times to start cars when I left the interior lights on by mistake, etc.

The unit holds a charge for a pretty long time. I don’t leave it on the charger but I do recharge it about every 3 months or so. It works fine, but if the motor doesn’t start quickly you’ve got about 1 more attempt and that’s it. I’d guess a mid priced unit from Walmart would do fine for you. I’m glad I have one.

"I would say something’s not quite right here. My '01 Jetta is on the original battery, and so is my '04 4Runner.

“There must be something happening that they die so completely when they do. Every single battery I’ve ever seen in a car dies a slow death, and even at the very end, there will still be enough power to turn on things like lights, etc, even if there’s not enough power to start it.”

I wish I knew what was happening. Previous cars I’ve owned have also had their batteries die a slow predictable death like you describe.

I drive this car almost every day. Five days a week I make a 30 mile round trip commute to work. I live in central Texas so we do get triple digit heat for for about 1/3 of the year.

The first battery, which I assume was the original battery, died in 11/2004. I was out running errands all day. Everything was working fine. I stopped to get gas. When I went to restart the car, nothing. The electrical system appeared to be stone cold dead.

I was so shocked by how completely dead my electrical system was, I took the car to the chevy dealer to have it checked out. They checked it out and said it was fine and I just needed a new battery and cables, which they installed for an outrageous labor charge. I decided to never go back to the dealer.

That second battery died about 2 years later in 8/2006. This time I took the car to National Tire and Battery and purchased the cars third battery. They said the car was fine and just needed a new battery.

That battery died 2 years later in 9/2008. For reasons I won’t bore you with, I was not happy with National Tire and Battery either, so I cut the cord with them (even though they might have given me some credit towards a replacement) and this time I took the car to an independent mechanic I had heard good things about from friends.

He said the car was fine and just needed a new battery. He installed the cars fourth battery, which is what I have in their now. It will be 3 years old this coming Sept.

So the short battery life problem is actually worse than my original post described. I’ve been replacing the battery every 2 years. (I was relying on my faulty memory in my op, but this afternoon I checked my written records.)

I also live in Central Texas. San Antonio…so I’m quite familiar with those temps. It sounds like you’re normally in areas that are frequented by lots of people. You do at least have a set of jumper cables, yes? If nothing else, one more start will get you someplace you can get it fixed.

I think a jumper pack is a good idea. However many seem to feel your battery failures are premature. Excessive heat can be an issue. If you live in Las Vegas you might have to expect shorter battery life. Another cause of premature battery failure is overcharging. Your alternator could test good, but the circuitry could be bad allowing too much juice to go into the battery. 2 - 3 years is not very good life for a battery. I did replace a 2 year old battery recently, but that is rare. My '03 Civic is still on the original battery.

One short lived battery could be a fluke. But consistant short life batteries indicate a problem in the charging system.

Yes, I have a set of jumper cables.

Rather than a plug in model, have you thought about those wind up battery chargers?
I dunno if they still sell those kinds, but I’ve seen a charger/jump pack with a hand crank you wind up

Last year, here in Mexico, I had a Delco Pro 2.5 years old die on me. The temps here are moderate year round. In the past, a battery usually lasts me over 5 years, so I replace after 5 years even if it’s still good. In this case, they had the right battery, company LTH.

My SIL in McAllen, which is somewhat hotter than San Antonio tells me his batteries have always failed a bit over 2 years, and he is in his 40’s. Many different makes and models of cars, always the same. He assumes it’s the heat. I was surprised when he told me this.

I have a friend who services national chains, and hot weather kills batteries quickly, no difference in cca or brand of the batteries from his experience, as compared to cold climates where you tend to get a warning period of slow cranking. As a thought I have a good battery tender and it will charge a battery to starting power in 20 minutes or so. It was bought for the boat, but came in handy until I could fix an intermittent brake lights switch. If your battery is completely fried it probably won’t help. I but think the 3 year replacement program as suggested previously is advisable.