"Possible" Head gasket issue...to seal or not to seal?

It’s been a while since I’ve posted, as I primarily do so only when my beloved (for over 26 years now) 1990 Acura Integra has issues come up that are economically repairable.
Now, those ugly/disheartening words, “Head gasket” have come into the conversation.
Here’s the scenario. Yesterday (Friday), was driving to work mid afternoon, stuck in Sports Arena lunch time stop-and-go traffic, when I observed my temp gauge was in the RED! I had only been driving for about 3-5 min at this point and was about 50 feet from the Chevron gas entrance, but stuck behind cars that were not moving. There is no shoulder to pull over on.
Immediately turned heater up full blast and when I was able (a minute or so after noticing the temp) pulled into station and turned car off.
Checked the overflow tank of radiator, which looked fine, then felt radiator cap and engine, both which felt cool, so I “carefully” opened the radiator cap and radiator was full of coolant.
AAA towed me to the shop where I had her timing belt replaced last year (August of 2015) and the tech started testing various things, including checking to see if exhaust was entering the coolant; he said it appeared to be doing this, and it was NOT a good sign!
Also saw that the radiator fan was working (did a bypass of some sort) but that the car was not telling it to turn on (relay problem I think he said?)
Noticed that radiator has some signs of seeping near upper edges (but I’ve never seen puddles or leaks).
Shop owner was gone during this time, but left car there for him to check later. When he was back, he could NOT get it to show the head gasket issue, but said maybe it was because car had been sitting a while and was cold, so he will try again on Monday. He said if he could not show a gasket problem, we can get the fan working, but if there is a problem, then it is not worth fixing at 269K+ miles.
I KNOW he is right, but I am so SAD! It prompted me to peruse the site about head gasket woes. I wonder about some of the “Leak repair” additives I’ve seen posted here and if they would work…just to buy me some time until I can find the perfect NEW Manual Transmission car! My trusty old car is STILL fun to drive…did I mention she has manual transmission? She still goes 80 on the Freeway! If I do have to part with her, I want time to find a place that would want to salvage her for parts, not just crush her; as that would CRUSH me.
Yes, I know, I am WAY too attached to my car; call me sentimental.
I apologize for the lengthy post.

Well if the car does in fact need a head gasket I say fix it. You obviously love the car, enjoy driving it, have maintained it well, and it still suits your needs. So fix it. If the head gasket is breached, I would have the cylinder head rebuilt (a valve job) and have the lower end inspected and rings and bearings replaced and cylinders honed if needed. This can all be done with the engine in the car. Sure, with the attendant timing belt and radiator maintenance it may cost you $3000 but what can you buy to replace the car for that much? Spending a few thousand to get another few years out of the car may be a wise thing to do.

There was something the first shop guy mentioned, that even if I replaced the head gaskets, then some of the older gaskets/parts that are down the line from this would start to fail under the new, higher pressure, as they are old. I"m probably not saying this correctly, just going on memory from yesterday, when I was feeling quite despondent! I’ll have the shop owner explain more about this on Monday.

That is a common thing for mechanics to say. It is partially true… a valve job just “makes” the rings and seals go because of the higher pressure. Not really but the other parts are worn and are due for a refresh. Sort of a “while you are IN there…” moment.

I agree totally with @asemaster , you can rebuild the engine to keep it going fora long time as long as rust isn’t an issue, as long as most of the rest of the car is in pretty good shape, as long as you can still get repair parts for things that break. $3000 is far less than a decent used car would cost.

You have to keep some things in mind though. A minor accident will finish the old girl off because it will be costly and maybe impossible to find parts to fix her. Weird stuff will fail that NEVER fails on cars with normal mileage and age; I.e. door locks, ignition switch, steering column bearings, turn signal switches, seat belt retracters. Stuff you must have but may be hard to impossible to find.

Finally… liquid head gasket sealer is a stop-gap measure that will prolong the engine just long enough to find a new car. Not to get you to a new head gasket. It makes a mess inside the engine and can clog cooling passages.

I think it be wise to ask mechanic for full price with tax and lobar for job before making final decision. also if mechanic is worried about other seals, then get price to replace those as well. It is obvious to me in your post that you still enjoy the car and want to keep it going. In this case, it is probably better to pay the money for repair than to buy new car.

I could not wade through all of the original post. But spending a lot of money on this 26 year old vehicle sounds like a waste of money. Snake oil type gasket sealers also a waste of money. Any late model vehicle will be safer in an accident.

The car is no less safe today than it was 20 years ago. But remember, it’s not money spent to get the car to last another 20 years, it’s a measure to buy some time, save some money, and thoughtfully plan for replacement instead of rushing into it because you have no choice.

yes, sorry it was so lengthy. Just wanted to get all points down.

I will find out the cost on Monday. If it is the costly job, my family, and probably the shop (although it’s money in their pockets!) will say I am crazy to spend that kind of money on an old car.
However, as with others who post on CarTalk, who believe that keeping old things running when one knows the repair history of the car, I too believe it can be more cost effective than buying someone else’s used car and it’s potential problems.
This will be one of the most costly, non-routine maintenance issues I’ve had to deal with, so it makes the decision harder.

If coolant isn’t leaking into the engine oil, add sodium silicate to the coolant.

I’ve used this on a few vehicles with head gasket leaks where the vehicle wasn’t worth repairing, or the owner couldn’t afford the repair.

You can get a 12 oz bottle of sodium silicate from a local pharmacy for about $30.00.

I have a bottle of the stuff in the shop just for this purpose.

it appeared to be doing this

Never take a mechanics words “…it appears…” for granted. It simply indicates that he has no idea what is wrong. As far as I am concerned you might have only a stuck thermostat in the “closed” position. The radiator and engine should have been hot not cold when you touched it. The radiator fan may not have come on because the water temperature was too low for the sensor to switch the fan on.

Ask for definite proof before you pay potentially for a “repair” that you do not need.

I rarely disagree with a couple of the experts here but I would think long and hard about fixing it. Sometime we are attached to a car but once we get a new one its a pleasure and we wonder why we kept the old one. Not saying I haven’t spent $3000 on an old car but I was putting on 30-40K a year so made some sense not to depreciate a new car in a couple years. If it is a head, Tester’s method might be a stop gap while you find something else in the right color.

As far as I am concerned you might have only a stuck thermostat in the “closed” position.

That’s what I’m thinking. How old is the thermostat?
I change them (along with the rad cap) every 10 years.
It’s not an expensive part, but use only OEM!

If you’re going to replace a thermostat, don’t install an OEM thermostat.

Instead, install a Motorad thermostat. 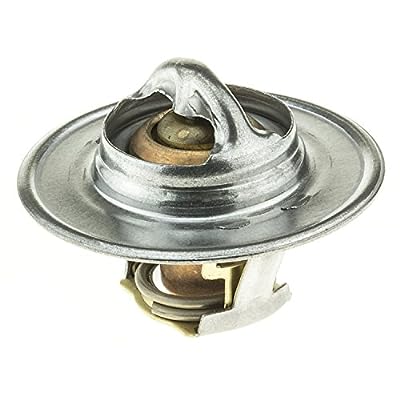 Fail-Safe Thermostats offer premium, patented technology for superior protection over any thermostat on the market. Only Fail-Safe is designed to lock in the open position when overheating occurs due ...

Suggest to fix the radiator fan problem first. That will almost always cause the engine to quickly overheat in stop and go traffic. Replace the radiator if it leaks too. That would be a good time to replace the thermostat also, if it’s been in there over 5 years. Then if the cooling system pressure tests ok, cross your fingers, that might solve the problem.

Edit: On my Corolla of similar vintage I’ve had to replace the radiator fan temperature switch a couple of times for this same symptom. That’s probably why your fan isn’t spinning too. That part isn’t very robust I presume, being in hot coolant all the time.

@circuitsmith, @Tester, and @GeorgeSanJose, funny, but the thermostat, in my recollection, has NEVER been replaced. Never had any issues with it.
Perhaps things made in Japan, as my car states under the hood, were made well

Again, I’ll know more tomorrow.
@Bing, you are right about wondering why we keep the oldies when a new one is around. I bought a used 2014 Camry back in May, which I do use unless my Teenager needs the car…and it IS great because it has a working radio, no scratches, worn out seats, etc, but my Integra is still more “fun” to drive, probably because I love driving manual transmissions!

You describe a lack of circulation, a failed thermostat. If the head gasket were leaking combustion gas (air) would be expected to be seen when looking into the radiator. Running hot in a short distance and finding the radiator to be full and cool indicates there is no circulation of the coolant.

Considering OP already has a much newer Camry . . . which probably is, and will continue to be, a very reliable car . . . I don’t see much reason to spend 3K to keep a 26-year old Integra around

DB makes a sensible post, all I can add is let the car go and find a nice late model Miata it will be even more fun to drive.

It would have been good to know, at the beginning of this discussion, that OP owns a 2014 Camry

For example, @asemaster suggested doing the repairs to the 26-year old Integra, in order to buy time . . . time in which to save money for the next car

Perhaps replacing the thermostat on the Integra is a sensible and cheap repair. If that fixes the problem, great. If not, it might make good economic sense to retire the Integra

But if OP invests 3K to keep the Integra going, she should view this PURELY as an emotional decision