Peugeot 407 gearbox problem that no one can figure

Hello everyone,
I know in US you dont have french cars, but you still may help me.
so i have a peugeot 407 2005 2.0L 136 hp, i have a problem with the gear for a very long time.
when i turn on the engine, i get gearbox faulty message and esp fault message, yet no light comes on the cluster, when i start driving after about 10 seconds esp light comes on, and when this happens the gearbox is not changing back to 1st when stopping and stays on 2st gear.
when cruising at 3st gear and 4st, everything is smooth and ok.
another thing is that the gearbox is not responding good, for example i can put the gear in D and it wont show that on the cluster, it will show N or R or P or a “-” symble. it happens sometimes not always but very very often.
almost everything has been replaced, it is basically a “new” car. gearbox replaced, abs replaced, everything is done in a correct way as long as i know.
I really dont know what to do. i was in serval certified garages all this time, no one knows what is it. in my country 407 is a rare vehicle that no one really knows how to deal with.

these are the codes the comnputer says: 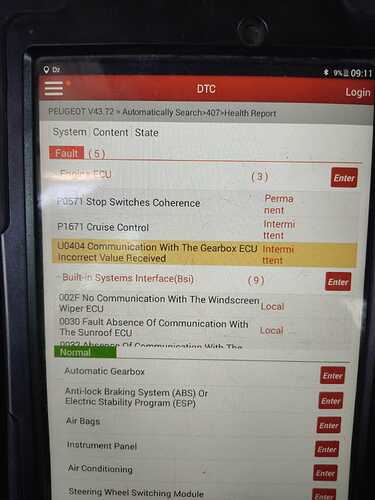 I have tried to do bsi reset, but didn’t manage to, i dont know why it doesnt work…
tell me everything you think that can relate to that, i will try everything.

I notice several messages in your photo, presumably about digital buss communications problems between the main ECM and the Gearbox ECU, the Windshield wiper ECU, sunroof ECU, etc.

My guess is that whatever is causing that is also causing the gear shifting problem. ECU is a control unit for a particular system in the car. It is a small special purpose computer , could just be a single chip (integrated circuit) or a circuit board. There could be a dozen or more of the ECU’s strewn about the car for various purposes. The main car computer has to be able to communicate with all of them. It’s like a home computer network. There’s a wire or set of wires in the car that usually are configured in a loop, daisy chained from one ECU to the next. If that loop gets broken, then the rest of the loop can’t communicate the car’s main computer. Suggest to ask your shop to check whether or not that each ECU is able to communicate along the whole loop pathway. Pretty much the problem that is causing those messages has to be solved first. Hopefully that will resolve the shifting problem. If not, well, best bet is get the computer to computer inter-commutation problem solved, then post back if the shifting problem continues.

It looks like the scan tool that you’re using is only communicating with the engine (emissions) E.C.U. There are many C.Us on the CAN bus that can be indepently accessed with vehicle specific scan tool software, if that’s even available. A fully featured diagnostic tool would be able to directly report sensor values from the transmission, and command it to shift in to specific gears. Good luck with full featured diagnostic software. I can’t even find free Windows software to access generic mode 6 OBDII data, which reports more advanced things like cylinder misfire counters and direct sensor values.

I think the console in OBDII scan tool software may show all the data that is being sent over the CAN bus between the modules. I’m not sure.

One of the modules on the CAN bus could have an electrical fault that is corrupting communications.

The T.C.U. has to tell the cluster C.U. what gear it is in. Apparently that isn’t working. That’s a good place to start with the diagnosis.

George_San_Jose1,
Are CAN devices always daisy chained? Some diagrams that I looked at seem to show that multiple devices can be connected to the same physical bus wires.

in my country 407 is a rare vehicle that no one really knows how to deal with.

Why won’t people say where they are located ?

I can’t help you with your gearbox problem but I do have some advice.

Don’t buy a car that is rare in your country for daily transportation.

I had a friend who was a proud Frenchman, living in the US. He naturally had to buy a French car.

Many were sold here in the 70s. He settled on a Renault. Not just any Renault, he had to have the Gordini version. His dealer was able to order one for him. There were no free oil changes from dealers then so at 3000 miles the drained his oil and removed the filter.

He rode his bicycle to the dealer to get a filter. He owned a Bicycle shop and an avid rider and racer.

The Gordini took a different filter, there were none in the US and it took 6 weeks to come in.

Heh heh. Order two and don’t take the old one off till ya got a new one.

I’ve got to change oil soon. I’ve got 6 filters on the self and 20 quarts of oil. These days I consider that almost at the re-order point.

Well, first of all thank you all for commenting.
I have another ECU and TCU, today i replaced them, the first thing i noticed that there is no more gearbox faulty message, secod thing is that all the errors i had, ABS, ESP, wipers and etc are gone, but the engine wont start, is there any kind of “reset” i need to do with the new ECU?
the TCU is working with the old ECU and as i said there is no gearbox faulty meesgae but still have the problems with the gear. i guess as you said the ECU is doing kind of a mess.
what can i do to make the other ECU work?

Even though my junkyard computer had the same exact number, whenever I would swap them I would have to open it up and swap the prom at the same time. I have no idea about your car but that was what I needed to do with my Gm.

is there any kind of “reset” i need to do with the new ECU?

No Peugeot experience, but yes, it is likely some sort of system or bus reset or re-configuration procedure is required. Also happens Iin USA cars, this sort of thing isn’t an uncommon report here. In some cars even something as simple as replacing the 12 v battery sometimes requires a shop do a computer re-set/recalibration. May require special equipment. Best bet is a visit to a shop that specializes in Peugeot, or dealership, let them sort it out. If they tell you something else needs to be replaced/repaired as well, you can always do that yourself if you like.

Are CAN devices always daisy chained? Some diagrams that I looked at seem to show that multiple devices can be connected to the same physical bus wires.

I’m not sure if bus configurations other than loops are allowed. Neither of my vehicles uses a CAN bus. Googling automobile CAN bus might provide a clue.

I can’t help you with your gearbox problem but I do have some advice.

Don’t buy a car that is rare in your country for daily transportation.

Not sure I understand what you mean. I don’t think OP lives in USA. Or is this particular car rare everywhere?

I don’t think this is helpful to the op. Swapping the computer for me required taking the the old prom out of the old computer and plugging it into the replacement computer. It was in the manual or someplace. No reset button but it needs the old prom to relate to the car in question. I did this often, even on the side of the road, to eliminate te computer as the problem.

You’re way ahead of me. I don’t hardly know what it is let alone make a copy of it. Just know to unplug it and put it in the new one. I wish I would have saved the computer just to look at again but when I traded/junked the car, put all the spare parts in the trunk. Might be helpful to someone at the u pull lot.

the engine wont start, is there any kind of “reset” i need to do with the new ECU?

The engine computer is linked to the immobilizer security system, you have a computer mismatch. It might be possible to register the used computer with the immobilizer/key using a professional scan tool.

Have you tried using your original ECU with the replacement TCU?

Yes the original ECU is working with the replacment TCU and it removed the gearbox faulty message, but the problems still exists. i dont have a professional scan tool for now since we have a holiday and everyone is closed.
just wanted to make sure that i may need to perfom kind of a reset to the ECU replacment.
I will do it as soon as i can, will probably in few days, hope i can make it work since it looked like it could fix all the problems.

Just asking but doesn’t the computer need to establish communication in order to turn the lights on? So just because they don’t come on may not mean the issue is solved.

Can’t speak to OP’s specific car, but my Corolla’s ECM (drivetrain computer circuit board) connects directly to the dash warning lights by wires. No bus involvement.

Well i only assume it will fix the problems since only replacing the TCU already fixed one problem i never could fix before.
i checked everything i could when connecting the other ECU and everything seemed to be fine but yeah as long as i dont drive the car to fully check things up, i cant be sure it will fix everything.
but i have high hopes for it since i really did replaced a lot of stuff, so i dont have a lot of options now… i will replace everything i can think of that can relate, to fix it.

This car is 2005 and for its year it has so many electric technologies that was only new to the french car industry (as people say), i guess this car was kind of ahead of its time, years ago french cars were known as mechanically reliable but electric wise they were awful. this specific car was the most unreliable, but the most enjoyable.

Why won’t people say where they are located ?

They don’t want anyone to come after that Peugeot

his car is 2005 and for its year it has so many electric technologies that was only new to the french car industry (as people say), i guess this car was kind of ahead of its time, years ago french cars were known as mechanically reliable but electric wise they were awful. this specific car was the most unreliable, but the most enjoyable.

My old VW Rabbit by far had a more unreliable electrical system than either my truck or my Corolla. I have no explanation why, just it was what it was. Fuse box and fuel pump relay was particular troublesome. Biggest electrical part problem on Corolla as been the radiator fan temperature switch. But that’s pretty easy to replace. Hard to believe, but my 50 year old Ford truck’s electric functions remain nearly like new. Only problem is when replacing the small exterior bulbs b/c the brass sockets have corroded and stick to the bulb base. Nearly always break the bulb when trying to twist them out.

Gee George, I would have thought your truck’s exterior lights were powered by acetylene