Persistence got him a replacement car!

A few months ago, a NJ guy bought a 2015 Honda Fit on which the dealership had already installed “pin striping” (actually, tape striping).
Because he didn’t want pin striping, he asked for it to be removed (a big mistake, IMHO), and the dealership did so.
After delivery of his car, he found many cuts in the clear coat that had resulted from either the installation of the tape stripes or their removal, and he also found a paint defect of another sort.

Even though paint defects don’t fall under the terms of The Lemon Law, his persistence–along with the intervention of the local newspaper’s Consumer Affairs Reporter–eventually resulted in his 2015 Fit being replaced by an equivalent 2016 Fit. 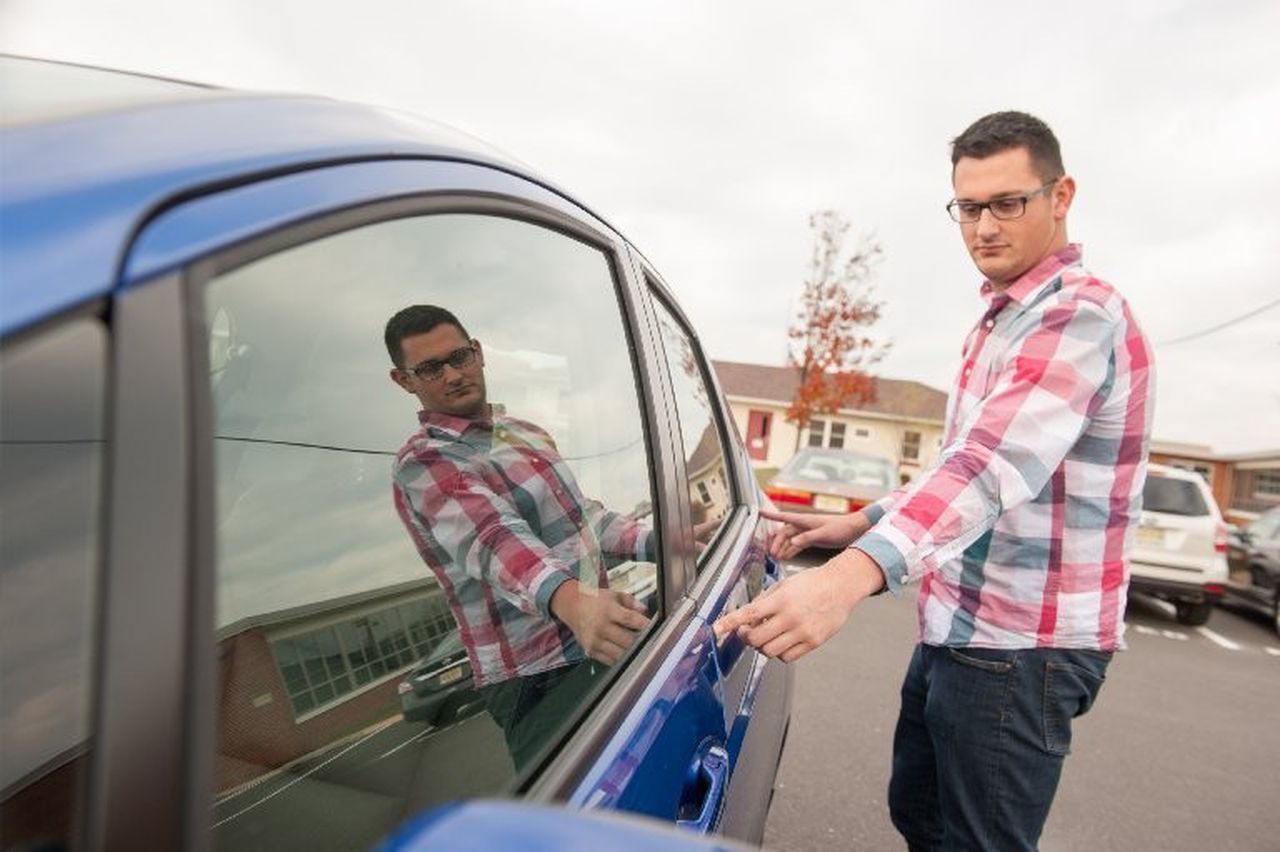 Bamboozled: Why clear communication with customers can make all the difference

Honda Universe promised a customer a replacement car, but a lack of communication made the customer worry that the dealer changed its mind.

Corolla’s of my own car’s vintage had a systematic paint problem, something wrong with the paint or its application right at the factory. It resulted in small imperfections, but noticeable if you looked closely. As I recall if you asked at the time, you could get it fixed gratis. My Corolla had (and still has) a few of these spots visible on the hood, but being lazy and being dubious that a re-paint of the hood might be worse than what I have now, I just ignore them.

Another case of the squeaky wheel getting the grease …thanks, interesting post VDC.

Congratulations are in order to the guy who got the replacement vehicle. It would be an extremely broad interpretation of most lemon laws, but you can’t argue with success.

George, is it safe to say that your car is an '80s vintage? In the late '70s-early '80’s, the EPA changed its allowable VOC content of automotive paints, and some manufacturers had difficulty adjusting to the new paints (new processes) successfully. A lot of '80s vintage cars had paint peel off in small sheets, others in spots. I can’t remember which one it was, but one of the manufacturers had it so bad that they capitulated and ultimately began to repaint cars on which it was really bad. Some manufacturers never had a serious problem, they seemed to have adjusted better.

Corollas of the early 2000’s also had a paint that would erode through in spots just from daily highway use. A friend’s 2001 Corolla eroded down to the primer along the front edges of the roof, hood, and upturn in the trunk lid edge. Oddly, there was no erosion on the plastic parts where flex agent was added to the paint.

I liked that vintage. It was a good, basic, affordable grocery getter with modest styling. Great driver visibility (missing in today’s cars) and good seating and ergonomics.
Apparently the paint problem must’ve lasted longer than I remember. A tribute to a poor memory!

My '76 Corolla was one of my favorites.

I can’t find any links about that particular paint problem remaining on the web. The problem wasn’t he paint delaminating or having rust spots. It was small spots that had a different appearance than the rest of the paint, much lighter in color, about 3 mm diameter, in the paint under the top coat. As I recall it was caused by some kind of contamination they discovered in the paint at the Fremont, California manufacturing facility.

I didn’t read the whole article to see the treatment the guy got which I don’t think was good but paint defects are just part of what dealers need to deal with when prepping the car. We special ordered an 86 Buick Park Ave. and when I saw it before it was ready for delivery, I was not happy with the paint on the 1/4 panel. Maybe they touched it up either at the dealer or factory I don’t know. The owner saw it and said they would re-clear the whole thing. I don’t think they did but whatever they did, it was fixed when I got it. I don’t this warranted swapping cars but they did need to re-clear the bad spots and never should have put the pin stripes on.

George, is it safe to say that your car is an '80s vintage? In the late '70s-early '80's, the EPA changed its allowable VOC content of automotive paints, and some manufacturers had difficulty adjusting to the new paints (new processes) successfully.

My brother bought a new Aspen in 77…within a year the paint was pealing off the hood.

I bought a new Chevy Citation (one of the notorious X-cars) in 1981, and I picked it up at night.
Only in daylight did I realize that there were several areas of the body where the primer was visible, through the microscopically-thin coating of silver paint.

I have to say that I did eventually get the car painted to my satisfaction, although it took–IIRC–three attempts before I considered it to be acceptable. However, within 2 years or so, rust began to appear around the chrome surrounding the rear window trim. Clearly, the entire car received an inadequate amount of paint, and also clearly, these cars were not exactly GM’s finest hour.

@VDCDriver My brother bought an Olds Omega with a V6 and fully loaded. Like all the other X cars, the power steering unit went, the transmission gave up the ghost before the warranty ran out and numerous other items failed. It was a nice car to drive when it ran!

He got rid of the car just before the warranty ran out, and bought a Honda which never seemed to need repairs. He has permanently sworn off US designed cars.

Well this might explain why my 1984 Corvette, purchased new out of the showroom, started having the back end (all one piece) begin to change colors after a few years of pampered life. It became so noticeable that dealers thought it must have been in a rear-end accident. A paint expert determined it was the clear-coat. I took it to the dealer it was purchased at and they didn’t want to discuss it (at the time I didn’t realize they were about to fold), so I had the expert strip off the factory coat and replace it. Problem solved. Always wondered what might have been the issue that caused the discoloration.

^
@Docnick–
Believe it or not the power steering pump was one of the problem-free areas on my Citation. However, I do have to say that GM stood behind both the basic and the extended warranty, and I essentially paid only for maintenance on that car.

By contrast, Volvo did not stand behind their product when I encountered a huge number of problems with my 242GL, and–overall–the Volvo had a lot more serious repair issues than the Citation ever did.

jimster, not sure I get the connection. Can you elaborate?

You should be aware that the paints used today are night and day different than those used back in 1984 not to mention the difference in application to an SMC body panel.

Did you know that 1984 is the very first year that GM started applying a clear coat over their solid color Acrylic Enamel Paints? AEP had been used since 1981.5 and a clear coat had been applied to the metallic colors since 1982. But in '84 they started covering their solids with the clear coat too.

The first year for anything is often problematic…

It seemed like lots of paint issues surfaced (pun intended) with the switch to low VOC painting systems.

@VDCDriver It was the rack on the X Car steering that was the problem, it occurred on other front drive cars as well. There were soon retrofit kits from both GM and aftermarket suppliers.

The rust problem should have been solved in 1976 when mandatory rust protection was started.

Yeah the racks were a GM problem in the mid 80’s. It was called morning sickness because the use of a teflon (I think) part ate away the bore and caused a loss of power steering when cold in the morning. The fix was about $500 for a rebuilt rack. Maybe that’s why I’m less concerned with loss of power steering on the highway. I was already used to cranking the steering wheel with no power.

But I remember the switch to water based paint and the problems it caused for a few years. Seems to me, Ford was the first one to switch back then at their own peril. And then the paint appearance was so bad that they finally had to go with the clear coat to give a glossier finish. As I remember anyway, right or wrong.

^
@Docnick–
No, I never had any problems with the steering rack.
However, the transmission problems, the ongoing issues with the e-brake cable becoming inoperative from rusting–despite being used daily, rattles, and rust were enough to qualify it as a problem child.

Jus’ chiming in on the paint discoloration discussion. I did not realize at the time “she” was beautifully sitting in the showroom calling my name that there would be paint issues or any issues (so naïve I know). Since there was no 1983 model Corvette, I must have thought at $28.5k there would be no bugs…again naïve. Suffice it to say that after 12 years of ownership, it was sold and I purchased a new 1996 Honda Civic LX and Honda has been our go to company since!

Bing: I never owned but drove a few mid 1960s cars with power steering that was touchy and vague. Bordering on unsafe. If I remember correctly the first vehicle I owned with power steering was the 1963 Pontiac Bonneville that I purchased in 1967. The next vehicle I purchased in 1984 was a 1980 Lincoln Versaille in 1984. Variable ratio power steering was a landmark invention. I recall mid 1960s red Fords that turned to flat red. A co-worker bought a new silver 1978 Ford Mustang II “PinTang”. Two years later the upper surface paint was peeling off in sheets.