The Oscar Meyer Weinermobile was badly damaged today, in a PA collision: 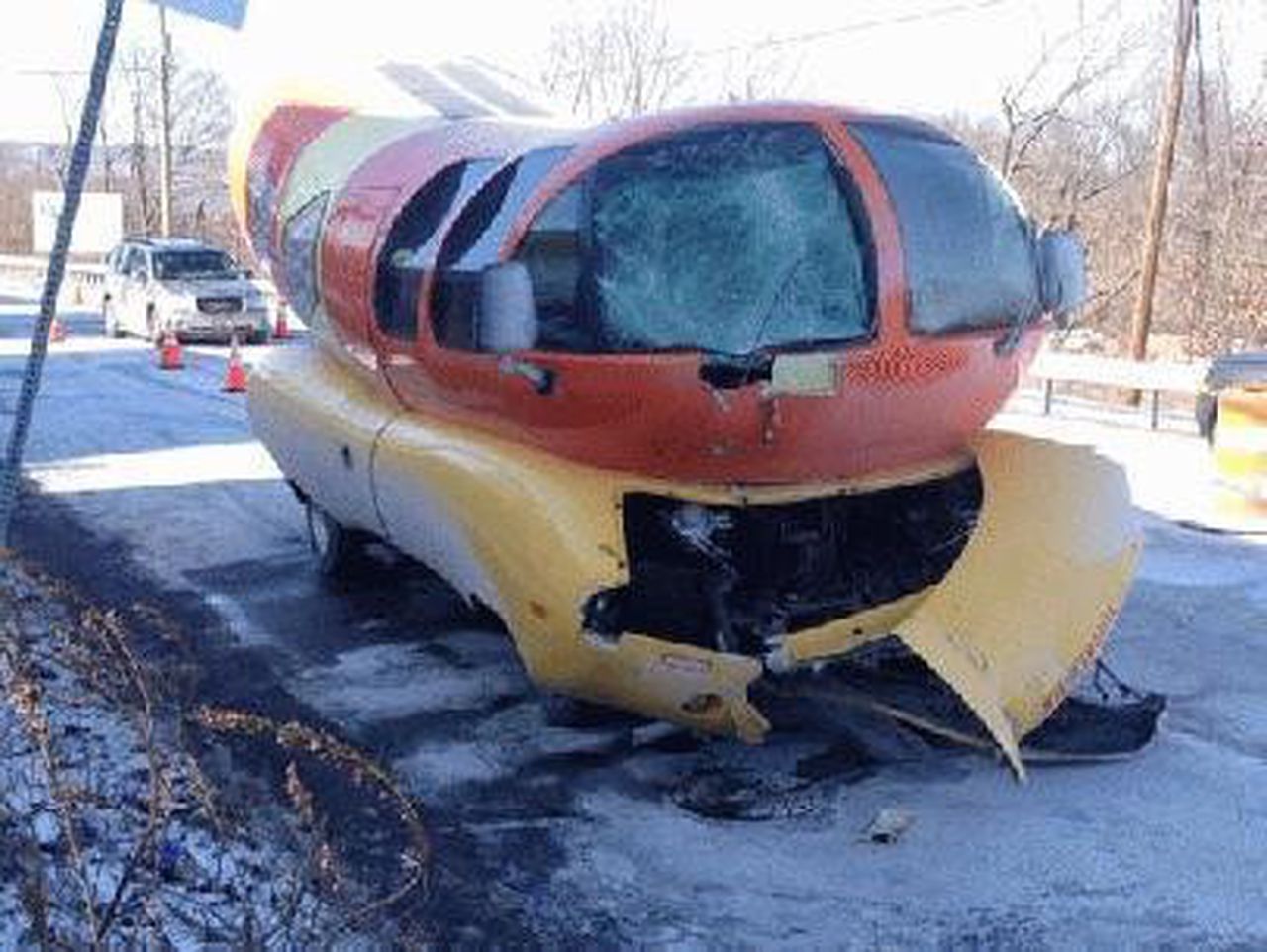 The front of the weinermobile was heavily damaged in the accident.

(Hint: If you see an ad on e-bay or Craig’s List for a “slightly used tubesteak-mobile”, pass it by.)

I thought the word “tube steak” was foul language, or at the very least, suggestive . . . ?!

Did you purposely use the word Weiner versus Wiener

Not that I’m complaining . . . Anthony Weiner is a moron who did himself in Apparently, there were many versions of the Weinermobile, through the years

I thought this was an old story from several years ago with the same comments, but it looks like the guy had another accident. Of course there is more than one of these I believe and no one is punished for too long at one time having to drive the thing. I think its the marketing intern that end up having to drive the dang thing.

See that’s what happens. Trying to drive and eat hotdogs at the same time. That sucker slips out of the bun …pickles and mustard all over your lap!!!

I saw the Wienermobile in Pittsburgh not 2 years ago…thought to myself “It’s almost worth a GTA rap to be able–for the rest of my life–to walk into any bar and say, ‘yeah, I’m the guy that took the Wienermobile for a joyride!’”

That should be a pricy estimate at the body shop and the guys at the paint store will probably struggle into overtime on a paint match for Mustard Yellow and Weiner Brown.

The Wienermobile visited our shopping mall a few years ago. The girl driving it gave us a tour and said it was GM based, but I don’t remember on what model. The gas tank, in case you wondered, is in the left “bun”.

‘’ Hello , Mr insurance guy…I seem to have crunched my wiener, am I coverd ?’’

See an article in the December 1987 Motor Trend magzine ( don’t know if they have online archives ) recently unearthed while mining the far reaches of my garage.
First one built in 1936… Five in the 50s built on dodge chassis ( dosn’t say which )…a 1958 underpowered jeep chassis…then two in 1969 on unspecified chassis. …one of which is reviewed in the article.
The article is useless for us car guys looking for tech.
It’s all tounge-in-cheek joking and even the tech box is full of nothing but jokes.

I believe at least some of the Weinermobiles were built on Olds 98 Chassis.

I would pick up the weinermobile in a heartbeat, for the right price, one qualification, no sale to Anthony boehner, or John weiner, or was it john Boehner and Anthony weiner.

John Boehner would bust out crying, while driving the Weinermobile, maybe because it was his lifelong dream, who knows?

Because of the tears in his eyes, he would wind up hitting a pole, or drive into a ditch

I haven’t seen him bust out crying on tv in a little while . . . high time he did it again

Can you imagine, if he were ever president, and he was meeting with a foreign leader, let’s say Putin, and he busted out crying, for no apparent reason . . . ?!

The other guy would stand in front of the wienermobile, in just his drawers, strike a pose, and would send the picture to an intern

It’d never fit in the garage.

You’d think they’d let somebody besides their wurst driver take it out.

Because Boehner is bone-headed

My bad. Most people I know that have driven through garage doors are on the inside, driving out, not on the outside driving in. Although I did know one fellow that tried to drive into a garage with a car already in it. He thought it was his garage but it was a couple houses down. I get your meaning now though.

"Because Boehner is bone-headed "

The next time you get anyone to vote for you for anything, let us know.