Now this is different - Solar Highways

I seriously doubt this will ever come to fruition…but it’s really thinking outside the box. If what they say is possible…I’m all for it. Not sure what the cost would be…probably 1000 times more then a highway costs now. And besides all the technical obstacles I’m sure the power companies and DPW workers will have something to say. 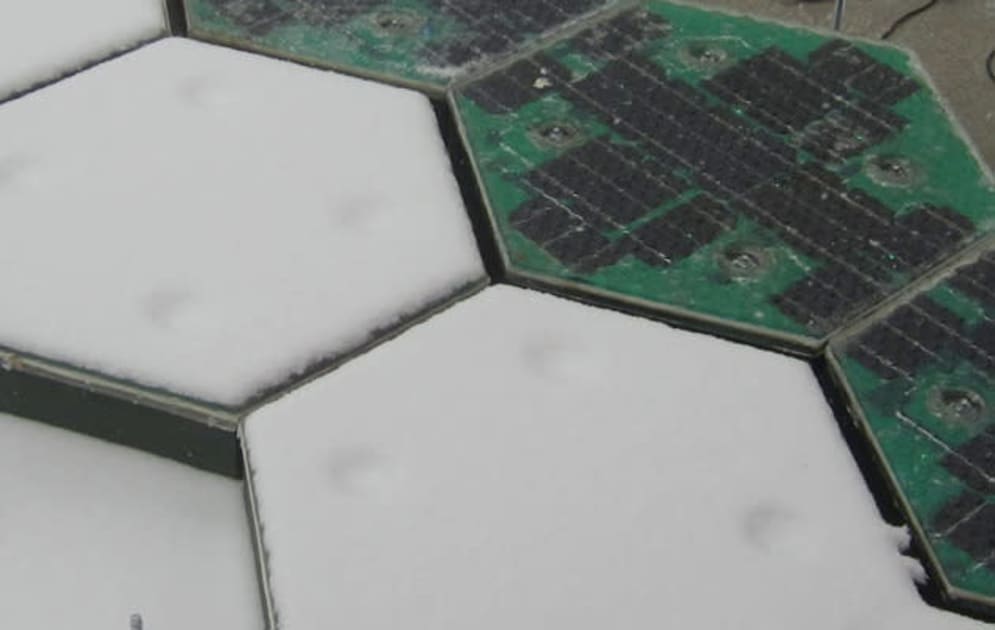 At some point, you've probably sat back and said "Couldn't we solve climate change and the broader energy crisis just by sticking solar panels to everything?" It's not a bad idea, mind, but the cost and resistance to such a scheme would make it a...

Interesting idea, but I’d be happy of they just fixed the roads we already have.

The article says the company asked for $1M. I personally could not support spending $1M of our tax dollars on something that would cost trillions more to actually implement when we don’t even have money to properly fix our current roads. There are countless roads that need to be torn down to the base and rebuilt that are just getting hot-patched, and many others with potholes that go for weeks before even getting hot-patched. To me this would be an example of wasteful government spending. I’ll bet they get their million…

IF-AND-ONLY-IF 100% of what they claim is true would I be for it. But I seriously doubt it’ll be worth it.

I have no problem with them getting investor money…just not tax payer money.

I remember the claim of the Nuclear industry advertisements. Their claim was that Nuclear power was so cheap…Electricity would be free. Remember Seabrook??? I’m trying to forget.

Too dirty too quick I’d say but r&d might eschew that caveat.
Maybe not for the publicly funded roads …but parking lots ? hey.

Plus I’ve always said that nobody should ever build another building without solar cells being all the roof cover.

Thence we could benefit from all the reflective surfaces that are also a part of climate change .( it’s know fact that developed cities create their own different weather ) they’d still be reflective but we’d get something back, perhaps enought to reduce some dino electrical production.

I wonder how the cells would affect the temperature around the cells. If it is only to operate lights, then heating won’t be that bad. But if we are considering miles of them, then heating might be an issue. I understand that birds get fried if they fly too close to a solar farm in Southern California.

What would be cool would be to have solar collectors making electricity powering wires embedded in the highway which could charge the batteries of cars driving by using electro-magnetic induction. You’d charge your electric car just by driving it. The only downside would be maybe the car would experience some drag and wouldn’t go quite as fast while charging.

KISS. Why use induction when a third rail is proven technology?

Interesting thought, George. Bicycle stores, perhaps even Wal-Mart, sell generator/headlight systems for bicycles. Put one on a bike and take it for a ride and you’ll have an excellent introduction of how much energy it takes to just run a small lightbulb. It’ll surprise you. I’ve done it. Maintaining a car battery’s charge inductively would produce more drag than you’d think. Remember that the bike generator produces electricity using induction also.

I don’t think electric cars work well with third rails. Even trolley buses can’t pass each other. And then there’s the chance of someone KISSing the third rail

An inductive charger would inherently provides a changing field to the car, which would provide its own field to affect the original field source. This affects the original generating device.

The motion of the bike drags coils through magnets and induces current flow in the coils due to the induced fields in the wires building and collapsing as they’re dragged in and out of the magnetic fields in the magnets. It’s inductive.

An inductive charger uses the same process except the fields are due to the 115V alternating current and the “pickup” is in the phone. It’s then rectified and applied to charge the battery. That process is inductive too.

They’re all inductive processes. The losses differ due to differences in mechanical advantages, inductive characteristics of the armature windings, inducing field strengths, inductive characteristics of the stator windings and speeds in the mechanically powered inductive systems (bike generators), spacing (critical in all inductive devices), and a few other variables. Bike generators use mechanical energy to move the induced windings through magnetic fields (the mechanical properties of the spinning armature) to induce a sine wave in the armature, AC-powered inductive chargers use the AC sine waves directly. DC cannot induce current and cannot be stored. Rectification is necessary to store the energy in the lithium-ion cell phone battery. The bike light may be operated with the AC, just as household lights will operate directly on AC, but I believe rectification is used. I may be wrong on that point.

Both inductive “device” chargers and bike generators are inductive devices. And in both, a specific amount of input energy is needed to light the bulb or charge the battery. The bike has to use mechanical energy, the inductive charger has the advantage of having a 115VAC source to get its power from.

The inductive “device” charger only requires a very, very tiny amount of energy. Lighting a bike lamp requires more. Maintaining the charge in a car battery while the engine is pulling the car down the road requires much, much more. The car battery has to provide enough electrical energy to do a lot of work. It has to not only run all the car’s system, but create thousands of high voltage arcs a second, the high voltage created by yet another inductive device. The energy is normally restored by converting some of the energy in the gas to electrical energy via the alternator, and that too creates drag as its magnetic fields interact with one another. To induce any usable amount by dragging inductive devices in the car over magnetic fields in the road would create an enormous amount of drag on the car.

I’d agree if the car is moving relative to a constant magnetic field to charge its batteries. But in this case, the varying field its provided externally. The fields provider is the one that provides the energy. Inductive charging of a moving object is not new. Shanghai has been using it to drive its maglev for years. The navy is looking into using the concept to catapults and rail guns

Creating electricity inductively takes sufficient mechanical energy to create a significant drag on a vehicle if done from an outside energy source. Try the bike light system and you’ll get an idea how much mechanical energy it takes to generate even a small amount of current. You’ll be surprised, I promise you. Dragging magnetic fields through magnetic fields takes a surprising amount of force.

Third rails are dangerous. Seriously so. They also are hard to keep a shoe in contact with as the shoe naturally wants to fly slightly above the rail, with that effect increasing with speed. Most rail systems use overhead wire in preference to third rail. They’re safer and they work much better at high speeds.

Linear motors (with magnetic fields that push and/or pull) and inductive charging (where magnetic forces induce a charge in coils on the bottom of the vehicle, with the charge either directly running the vehicle or charging batteries) are quite safe. The magnetic fields are very localized. The phobics will still have a field day, but unless you’re inclined to sunbathing in the middle of a traffic lane the magnetic fields you’d be exposed to would be negligible. They drop off quickly with distance.

@Ken Green,in total agreement,I think that anybody that buys an electric assist car ,should have a solar charging as an option and why we are at it,I want buildings constructed to be more fireproof and constructed with better concrete,also with repurposing in mind(helped demolish an old Rayon plant and the the buildings were so sturdily constructed they would have stood a high F scale tornado,but they were good for only one thing(it made me sad until I realized-new would be cheaper) so it goes,the throw away society fuels commerce and creates employment,but as I get older,it stares me in the face,that I cannot afford to keep replacing things as they go bad-Kevin

Imagine paving the roads with a series of 4X8 sheets of plywood and I think you get the idea of how feasible this idea is - as in “NOT!”.

I sort of opened a can of worms about inductive charging and whether it would create a drag on the car … lol … you know, I’m not sure who’s correct about the drag effect? It seems like there’d definitely be a mechanical drag on the car if the magnetic field was static and the car was moving. But if the field was alternating, would there be a drag then? If the car was sitting still say, w/an alternating magnetic field it would still charge ok, and the charging process wouldn’t move the car. Or would it? Maybe just back and forth?

Could it be what happens with an alternating magnetic field and a moving car, the magnetic field has no net mechanical dragging effect b/c during one phase it drags, but during the next phase it pushes?

Edit: I recall seeing the description of a thought experiment where you had DC current in a wire, and you measured the magnetic field. Then you ran along side the wire at the same speed as the electrons were moving, then you measured the magnetic field? Would it be any different? I think the answer was “yes” and this lead directly to Einstein’s theory of special relativity!

You know what George, I’m not sure either. I apply everything I know and try to draw logical conclusions, but am often proven wrong in the end. That’s when the learning starts.

At least that’s my theory!

But there’s a problem. Quantum physicists say electrons don’t orbit atomic nuclei like we illustrate them as doing. They’re highly erratic particles, appearing and disappearing in a highly erratic manner. So what IS the speed of an electron?

And what really IS magnetism? Is it relative to the speed of the electrons? Nobody really knows.

I just remembered something else. At temperatures approaching absolute zero, some materials become almost perfect conductors, the inactive subatomic particles (neutrons and protons) becoming inactive and creating no resistance to the flow of electrons. How this affects magnetism is unknown to me. I’m not sure even the quantum physicists know. So can the materials induce magnetism? Is magnetism created by the electrons or the interaction of the electrons with the protons and/or neutrons?

Oh we have the money. It’s just in the pockets of people who don’t need to use roads. Ha Ha.

“…a paradox upon which I had already hit at the age of sixteen: If I pursue a beam of light with the velocity c (velocity of light in a vacuum), I should observe such a beam of light as an electromagnetic field at rest though spatially oscillating. There seems to be no such thing, however, neither on the basis of experience nor according to Maxwell’s equations. From the very beginning it appeared to me intuitively clear that, judged from the standpoint of such an observer, everything would have to happen according to the same laws as for an observer who, relative to the earth, was at rest. For how should the first observer know or be able to determine, that he is in a state of fast uniform motion? One sees in this paradox the germ of the special relativity theory is already contained.”