2013 Honda Civic with 40000 miles. While turning right, it was making a thumping noise that varied with the car speed…
Mechanic removed rust from rear passenger side brake drum and backing plate, that fixed the problem.
Since then whenever I brake (particuarly at lower speeds), there is a rhythmic speed sensitive squealing/squeaking sound that appears to come from the rear passenger side.

What are the possible culprits, can I just ignore it or does it need urgent eval?
Of note, a few months ago (before the rust was removed from the drum/plate), the brakes were inspected and felt to be in good shape with 20,000+ miles left on them

The brake pads have wear indicators on them that make that sound when they come in contact with the brake rotors. 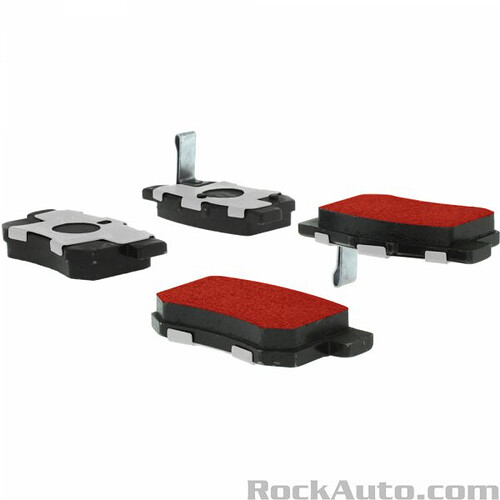 It’s those metal tabs you see.

OP said they have rear drums though.
we really need to know for sure if the vehicle has rear drums or disks. I believe they could come with either.

I just checked. They are definitely drums in the rear.

Unless you were applying the brakes a little while turning, it’s hard to figure how cleaning rust off the drums would affect that first thumping symptom. When you heard that thumping noise, did it seem to be coming from the rear or front?

I’ve had a thumping noise in low speed turning before, caused by an alternating wear pattern on one of the rear tires. I’ve had scraping noise at the rear when applying the brakes, seemed to be associated with wet weather, caused by one of the shoes at its wear limit and interacting with rust on the drums.

He said the rust was built up enough on the drums/plate that when the wheel was turned a lot (which was when I heard it) it rubbed on something leading to the thumping noise. That thumping noise only happened while driving (not braking).

The current noise comes from the same part of the car (rear passenger side) and only happens while braking. A rhythmic high pitched squeaking as I brake most noticeable when at slower speeds such as when approaching a stop sign.

when the wheel was turned a lot (which was when I heard it) it rubbed on something leading to the thumping noise.

But the thumping noise was coming from the rear offside wheel, right? Acute steering angles might cause a front wheel’s brake parts to interfere w/something, but the rear drum-brake wheels? That’s a new one one me anyway.

At any rate the thumping problem is gone, so on that part, all’s well that end’s well.

(rear passenger side)…rhythmic high pitched squeaking as I brake most noticeable when at slower speeds such as when approaching a stop sign.

Most likely associated w/ the new brake shoes. If it doesn’t go away on its own, you may have to get the drum resurfaced, or a new drum. I’ll add that whenever I replace brake shoes, to minimize the possibility of squeaking, I create a light crosshatch pattern on both the new shoes and the brake drum surface w/ some 160 grit sandpaper. I don’t think that is common practice at auto repair shops, so probably wasn’t done on your car.

Is your suspicion this is more of an annoyance issue or an issue that needs urgent attention? I only plan on driving the car another 5000 miles or so before I trade it in…