No wonder Ford discontinued the Ranger

The referenced test finds the Ford Ranger to be 7th of 7 midsize pickup trucks. Ford is doing so well with the F-series; why should the manufacture an outdated truck like the Ranger?

On the positive side, the testers liked the Tacoma best, then the Frontier, then the Ridgeline.

I’ve said it before and I’ll say it again. The Ridgeline is the “truck” for people who like the idea of having a pickup truck, but don’t really have a need for one.

But to answer your question, Ford stopped making the Ranger because the newer F-150’s were better in almost every way. More power, better fuel economy, and more capability in terms of hauling an towing. There were rumbling that Ford was going to take the UK-spec Ranger to the U.S. put some gas engines in it (most likely being the 3.5L or 3.7L V6’s they use in some of their cars and crossovers and call it the “F-100” like they used to. But apparently they didn’t think the demand would be strong enough to justify the costs involved as for the last few years there have been relatively few people who buy new Rangers for personal use, the bulk of their sales has been fleet sales for some time now.

A neighbor has his yard work done by a ‘professional.’ The lawn care professional bought a D-250 with a Cummins engine several years ago, just before fuel prices spiked. The dealer offered him so little for his old Ranger in the deal that he kept it. Since the fuel price spike the Ram has sat at the house and the old Ranger is back on the road paying the bills. Including the payments on the Ram. Maybe Ford could put a diesel in the Ranger and offer a heavier rear end. They might have a real winner. Like so often in the past Detroit keeps re-fight the battle they just lost with no one looking over the hill.

Ford is introducing a new small P/U in many markets, just not in the U.S. yet… Big new assembly plants in South Africa, Australia, Thailand to build this vehicle… 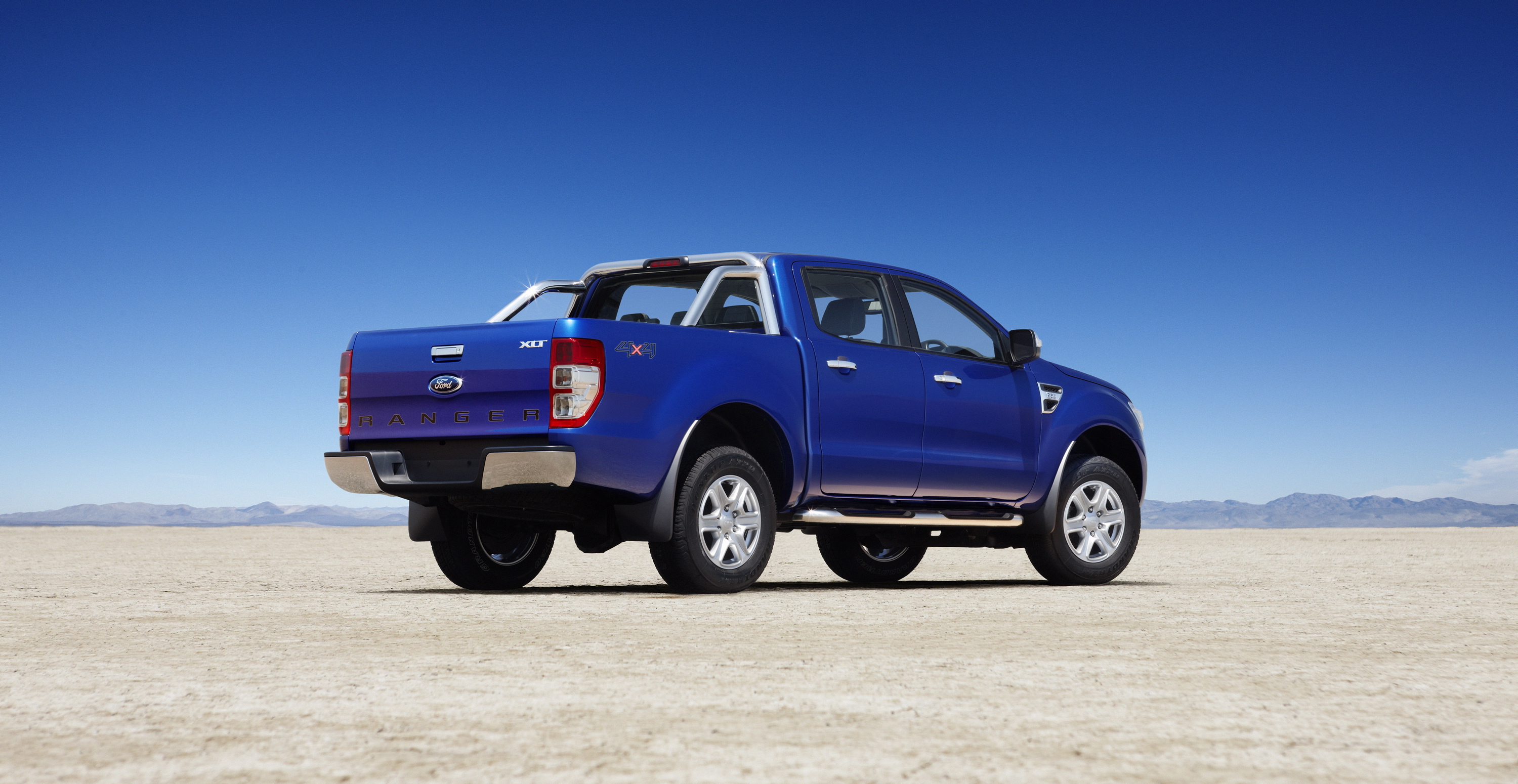 Details are out regarding the all-new 2012 Ford Ranger, and the design looks poised to step right in below the F-150 in Ford's lineup. But, sadly to longtime Ranger enthusiasts (and there certainly are some), it's not coming to the U.S. Here's why,...

It is a damned good vehicle. Old and no doubt due for retirement. However, it is a long-lasting, durable and reasonably well-handling truck that is also easy and inexpensive (relatively) to fix. You don’t always have to update to bigger bigger bigger every model year. It seems to me, the gimmick in the car and truck market is to start out with an economical , chassis and make it incrementally largr through its lifetime. New for 2012!..A bigger engine, bigger wheels, longer wheelbase, etc. You end up with and overpowered, expensive to repair, gas hog. I enjoy my '07 Ranger’s smaller footprint and less-than-football-field-sized turning radius. Lets be honest, for most of us, we’re only carrying around one carcass 95% of the time. I just love seeing the good 'ole Excursions being driven around as a daily commuter by a single person in a suit and tie.

It seems to me that Ford, GM, and Chrysler are always abandoning some segment of the vehicle market where I think that they could compete. I need a minivan. I had a Ford Aerostar and when it was dropped, I bought a Ford Windstar. When I was ready for another minivan, Ford no longer made a minivan and the E-150 was too large for my purposes. I then bought a Chevrolet Uplander. When I was ready to replace that minivan, GM was out of minivan business. I wound up buying a Toyota Sienna.
I think the same thing is happening in the small truck market. When Toyota and Datsun (now Nissan) imported small pickup trucks, GM introduced the Chevrolet LUV (made, I think, by Izuzu) and Ford introduced the Courier (made, I think, by Mazda) Chrysler imported a small pickup truck and put the Plymouth name on this truck. The market must have been lucrative, because we then had the Chevrolet S-10, the Ford Ranger, and the Dodge Dakota. Now if Nissan and Toyota could keep updating their small trucks, why didn’t Ford, GM and Chrysler do the same?
When I last went shopping for a minivan to replace the Uplander, the dealer tried to sell me a Chevrolet Traverse. It didn’t meet my needs. Ford tried to sell me a Flex. It wouldn’t do the job. I need the sliding doors. Ford and GM lost the sale to Toyota. If I have the need for a small pickup, I don’t want an F 150. I’ll go to the manufacturer who builds what I want.

Ford wouldn’t have kept them around for so many years if they hadn’t been selling them.

Even the Tacoma and the Frontier are a far cry from what they used to be. They have gotten so big compared to 10-15 years ago.

I’m kind of disappointed Ford is discontinuing the Ranger…It was a small truck and didn’t have the power of the F-series but it was a good little truck for just general purposes. A lot of Rangers were purchases as Fleet Vehichles. As far as Vans go, I’ve only seen two major manufacturers produce new mini-vans last year. Chrysler and Toyota. Nissan doesn’t even make a van anymore.

It would seem that Ford saw that the Ranger was in direct competition with their sale of lease return F pickups. Leasing top of the line trucks would be the most profitable segment of the market when the used vehicles can be sold easily. Buyers who would have bought a bare bones Ranger are left spending the same money or more to buy a used lease vehicle F pickup loaded to the gills.

That’s because they’ve been built for so long. But new truck sales for the Ranger are awful. Sales peaked in 1999 at 348,000 and were only 66,000 in 2008. Ford called the crew cab Ranger the Explore SportTrac and sold it for more than they could have as a Ranger. If the name carries so little clout, why bother?

I am not so fussy, I had an 03 Ranger 2wd standard cab, manual trans, and liked the truck just fine. If I did not need extra towing capacity and 4wd I would not have sold it. It had a perfectly adequate 4 cyl engine, 23mpg city, 29 hwy. For me new and improved is not always better

They are just Mazda’s, right?

I’ve been happy with my 2010 Ranger SuperCab XLT 2wd 4 cyl manual for 17,000 miles now. When I was shopping for a compact truck the main features I wanted was extended cab, 2wd, 4 cylinder, a manual transmission, and half decent fuel economy. I looked at all the competition and chose the Ranger over all of them. My personal opinions are as follows, and may be out of date by now, but here it goes:

Tacoma - Yes, I can be petty and vindictive, but when I was shopping I was incensed that to get variable speed wipers I had to pay extra to get the SR5 package (with all the bells and whistles, rear view cam, etc.) to get them. Plus I think the Tacoma in 2wd trim is ugly as sin with all the body plastic - total elephant in ballerina shoes look. I did briefly consider a regular cab, but seriously Toyota, why don’t you have a split front bench? Toyota also in my opinion has weird packaging, such as you can only get fog lamps with the V6.

Colorado - Everything about it felt cheap and flimsy. I later learned that the front brake system was designed by monkeys and quotes to replace the rotors have been known to run upwards of $1000-1500. http://www.designnews.com/author.asp?section_id=1367&doc_id=212017

Frontier - Why bother? Nobody around here has more than two on the lot and the specs I was looking at are unimpressive. Only 9 more horsepower and 17 more foot-pounds of torque compared to the Ranger and it gets 19/23 mpg? No thanks, my Ranger has been averaging 24-25 mpg combined. The Colorado gets better numbers with a larger and more powerful engine.

I know the Tacoma and Frontier have better towing ratings, but to be honest I don’t tow. I though about it when shopping and the largest thing I could think of towing would be a wood chipper. And for how often I would need to do that considering I have curbside yard waste collection and a drop-off center I’ll pay to have the rental store deliver it.

Caddyman has a good point. Not much of a ford fan myself. Had a Mazda B2000 once. They went downhill after the “merger” IMO.

A lot of designs start out frugal and after several iterations are more expensive and loaded in the interest of new and improved. We used to say it starts out as a yugo and ends up with a hood ornament…

A solid truck whose market is arbitrarily stretched by other factors.

The Ranger has actually had a very good run for a truck with a Pinto based motor for much of it’s life.

The Ranger went down hill after it stopped using Mazda components and started using their own. Not because the Fordmcomponents were worse at the time, but they were never updated and Ford just doesn’t want to pay the development cost. Initially having such a larger share by name recognition in the truck line, Mazda fell in line.
After all, the f150 was and is where the real money is…

It really doesn’t matter the contrived reasons buyers give to buying Rangers. There was really only one acceptable one…they were CHEAP. This is the real one in "goodshepards"contrived reasons too. Admit it…“goodshepards”, you are a skin flint. ;=) when you get the urge to part with a little more $$$$$$, you’ll happily trade it for a real truck.