So Car fire near us, ended up being a neighborhood meeting. Full of fireworks and an obvious leaking gas tank. One guy said there had been 3 out by his mothers house. Have you heard of this activity/

Only in mystery books. But it’s hard to get prints off of charred sheet metal. Note to thieves, they don’t take prints for theft anymore. So unless it’s murder, why bother?

Seems like they’re more often stripped of parts and just left somewhere, at least a friends 2001 Accord was stolen from Seattle awhile back and basically just the shell was recovered.

Haven’t noticed that here in San Jose area. I did see a car on fire the other day mid-intersection, but it had crashed into another car.

Recently happened to someone in Britain, Triumph Dolomite Sprint stolen and found burned, had been owned by one family since new. 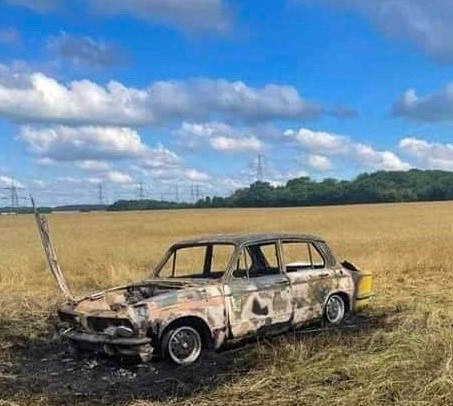 Photo reminds me of episode of Doctor Who , DW and assistant standing in similar looking wheat field, DW’s cute-young-woman assistant says to DW: “what is corn used for?, what do they make with this stuff?” DW doesn’t seem to know either … lol…