Perhaps @cdaquila can add something to this discussion, as well.

In any case . . . do the guys on this forum often start posting using another screen names?

I realize that some users have actually gotten banned, from time to time. Do any of those guys come back, with a different name?

Does anybody ever change their screen name, perhaps because they’ve burned their bridges, so so speak, or upset a lot of other guys?

And I’m not expecting anybody to outright say “Yeah, I got banned for bad behaviour. Now I’m back under a different screen name, and I’ve changed my tune.”

The thought crossed my mind, because one of the regulars suggested that he might return using a different screen name.

This forum is supposed to be open to all opinions, so no one should be afraid to voice their opinions, or offer up opposing views. …within reason.
I doubt he’ll be gone long. He has been a good influence and has posted some pretty sharp answers. I’m hoping he’ll get over it and just take a day off to cool down.

I think those who might leave and come back under another name, would only do so because they are too insecure and wish not to defend their views.

I doubt even @cdaquila, would know if someone did return after being banned. All they havecto do is get a new free E-mail to sign up with.

My methods have been questioned and I have been swayed in some areas to change my tactic’s, and other methods I’m holding on to yet. So it’s just a give and take.

That’s why most of us come here for…to learn…and at times be able to offer our opinions on a repair or problem.

I came here for advice and found my answer to my problem, and then I realized that I could offer at least something.

A while back there were some contentious threads. I think one of those involved returned under a different name. But it’s been a while.

“All they havecto do is get a new free E-mail to sign up with.”

However, a person’s IP address can be deduced by the site’s technical folks, and if somebody has been abusive, it is possible to see past a new e-mail address and figure out that the new identity is actually the old person under a new name.

I can’t explain this properly in a technical sense, but I believe that Mike in NH could elaborate on this point for us, as that is his area of expertise.

To get a new account, you would need a different computer…Which for trolls is no problem… 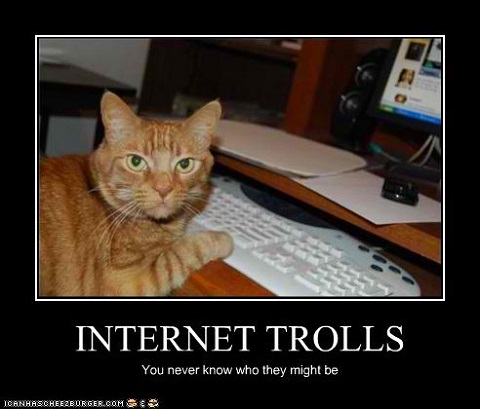 I don’t think banning anyone would cause much of a disruption if they chose to register and start over.

EBay has been plagued with scam artists; both buyers and sellers. EBay bans them if the situation is bad enough and they’re back in business the same day with a new ID.

He was a little pointed in his opinions, quite a little on the socialist/european side, and a little insulting, but really it wasn’t that big a deal. I think maybe everyone should maybe chill a little. Everyone comes from a different set of life experiences.

I’m guessing this is in reference to Mechaniker’s comment about taking a sabbatical, and possibly coming back under a new name. Rather than seeing it as a threat to return and troll the Community under the Italian flag, I read it as sarcasm. He’s anything but warm and fuzzy, and he’s really opinionated, but the guy’s been posting here since 2011.

@db4690, the short answer is no, I don’t believe we get a lot of repeat trolls or incognito regulars. Part of the reason is I’ve never banned a regular in seven years, except for a very devoted troll we had three years ago. (Anybody remember the many faces of littlemouse?) Bans are usually for spammers. Yes, I do check IP addresses, which I can usually locate geographically. Occasionally we get a new provocateur who bears striking stylistic similarity to a regular, but I can’t confirm it and the trouble-maker account eventually goes away once he’s had his fun.

On another forum I post to a contributor has been banned several times and returned using a different name. They have not done anything that bad but like to play annoying, boring, mind games while pretending they are incredibly innocent/naïve and wasting every ones time. They are easily recognizable every time they return.
Our contributor who is the reason for these questions is normally a fountain of knowledge. This time he was Niagara Falls! I immediately drowned. I can only imagine circuitsmith surviving this.
It reminded me of one of my responsibilities as a DoD technician of not only maintaining, repairing, and modifying aviation night vision systems but also assisting in training of the end users (aircrew). The unit training plans included information furnished by the manufacturer which included theory, design, and manufacture. I protested that by military maintenance regulations the user level was limited to: preflight, minor troubleshooting (which usually required returning the equipment for replacement), replacement of batteries, and more detailed knowledge of equipment limitations such as visual acuity and lack of peripheral vision. My argument was: " They need to know how to use them. Not how to invent them"! The unit commanders being aviators readily agreed. I am confident that our contributor will return as his threat of returning as “Guisepe” for the purpose of discussing Fiats was far to humorous for a German engineer!

My original label used to be simply “mountainbike”, but years ago the forum software was changed and I was unable to log in under that name anymore. That’s where “the same mountainbike” began.

Lordy, that shows how long I’ve been hanging out here! I think that was before my first heart attack in 2007! I like the forum, like the crowd, and have learned a great deal, much of it from some of the posters that still frequent the site. Just now on another thread I learned from ASE that the practice of pinching brake flex lines has gone back and forth between not recommended and recommended. I’ve always subscribed to the former, but apparently my concerns about damage to the hose inner liner are unnecessary.

Carolyn, you hit he nail right on the head with your last paragraph.

I should add that this forum has helped a great many people over the years. Usually with car advice, sometimes with moral support, and occasionally even marital dissonance (call me an optimist).

I hope to be here for years to come.

I think @cdaquila summed it up nicely with this comment. I’ve been here for years…so many that I’ve forgotten and I’ve seen regulars come and go. I think some disagreement is a good thing but some people just like to disagree for disagreement’s sake. They know who they are…and so do most of us. I don’t think any of us in this little family have families that are perfect. I still learn something almost every day from this forum and I’ve been turning a wrench since I was a child. I think of Car Talk as visiting an old friend and hope to keep the relationship open for many years to come.

“Anybody remember the many faces of littlemouse?”

Only too well, Carolyn!
It was obvious from his first post that he came here only to insult people and to sow discord, and even with one or two new aliases, he was still the same consistently negative person with nothing to contribute of a positive nature.

Missileman, I disagree with you…
(

I have some posts under a different name but that was because when the board has made changes, I have had problems with my user name. So far the moderators have been able to get me back up and running under my current name. I have been here so long that my number of posts have gone over the max count and reset.

JMHO, but I don’t think anyone should get banned unless they’re making physical threats against someone, excessive profanity or lewdness, posting just to be an argumentative PITA on every subject, or spamming snake oil.

The IP address matching only goes so far. My provider may assign me to any number of IP addresses, there are also websites one can go to that make your IP address appear as coming from a different server. Man ageing a board I found IP address is no rock solid guarantee to stop a troll.

At board change I also had to change my name due to log in permissions, but doubt I would encounter any difficulty setting up additional users so I could agree with myself if I wished.

As far as email addresses my provider allows me to set up to 100 alias addresses, that will port to my inbox, as a measure to kill an address that gets spammed, without major effort.

I used to love the mythbusters forum, but they did not have the great oversight like this board, people would spam and have offensive images that might remain for days, guess that is why they took the board down.

Right back at you the same mountainbike.