My friend just eloped with a Miata. What do I get him for Christmas?

A friend of mine recently found the car of his dreams, a 1991 Miata. Convertible. Mariner blue. It’s a she, and she has a name. He’s absolutely smitten. I think he’d marry the Miata if he could. (Can he? That might be legal in Massachusetts now. Hm.) He’s an engineer and a shade-tree mechanic, and he’s been pouring his heart and soul into tinkering, tuning, and generally caring for the car to the utmost of his ability. It’s a labor of love.

I, on the other hand, am not a car person. (Although I’ve ridden in this one, once. We went to the store. By the time we got home, I’d had an epiphany, and suddenly understood why car people care passionately about cars like the Miata.) I have some vague ideas about how automobiles work. I’m aware that they have a lot of “parts” which sometimes “break”, allowing your chosen “mechanic” to make his “boat payment”. Differentials look neat. Beyond that, I’m pretty clueless.

My question is this: What do I get him for Christmas that would be thoughtful, helpful, and celebrate the fact that he has far better taste in cars than he ever has in girlfriends? I’m not looking for anything major here – I have a limited budget, and besides, if I want him to take it home, it has to be small enough to fit in the Miata’s trunk.

If he doesn’t already have one, a proper shop manual. With a 20 year old car he’ll appreciate it. If a shop manual is unavailable, this might be a good choice. 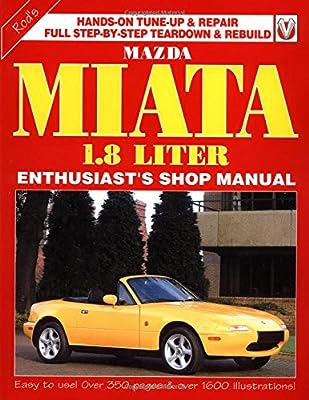 The super-manual for Miata owners. The author has personally dismantled and reassembled a Miata, taking step-by-step pictures of all procedures. This, combined with his personal interest in the Miata ...

I’m not to impressed with Haynes or Chilton manuals.

Lots of books out there, Amazon’s a good source: 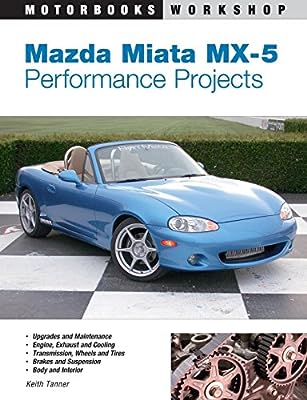 The Mazda Miata MX-5 has been a popular car among automotive enthusiasts for more than a decade, and hardly a single one of the more than 500,000 sold has not been customized by its owner in some way. ...

I can’t speak for that book, but it got good reviews.

Take 13 good pics of his Miata, all shined up in nice settings, and make them into a 2012 Calendar.

Since you’re on a tight budget, pethaps a cast-metal scale model of his Miata would be nice. Hobby shops and even department stores have a lot of these things, or you can order one over the internet.

Car care supplies: wash, wax, clay bar kit. Tools to work on his new toy. A good shop manual. If he’s going to park it for days at a time, a car cover.

Just kidding, hopefully it is a perfect car.

Blow up person to sit in the passenger seat?

the tire pressure gauge is very geeky in a retro way. I’m an engineer and I should know.

Thanks a bunch, guys!

edb1961: He’s already got the proper manual for it, and he’s decided to finally get a Kindle to view an electronic copy – Kindles put out virtually no heat and don’t really need venting, which means you can stuff the things in a plastic bag to protect them against grease, moisture, and drippings from the jelly donut you’re eating while squinting at car parts.

mountainbike: The model might be a good idea, but being an engineer he prefers to build them himself. Do they make LEGO Miatas?

waterboy: He’d never use it. That’s where he puts the boxes of comic books and broken Roombas he transports back and forth whenever he comes into the city to see his friends. I assume that’s also where he’s going to keep the toolkit if the thing decides to start breaking down at random times, stranding him by the side of the road.

jtsanders: How picky would I have to be when ordering floor mats or sun shades? Would just finding something that fit a 1991 Miata do, or do I need to investigate things like the depth of the pile to make sure it wouldn’t gum up the clutch pedal? And is there a mat color that traditionally goes with mariner blue? A nice solid old-fashioned tire gauge might be just the ticket, though. If I get a really geeky retro-style one, he can store it with his slide rule.

arbella–if your friend is still using a slide rule, you might consider getting him a bottle of Geritol.

Storing the tire gauge with his slide rule might imply it goes in the junk drawer. I still have a couple of slide rules, an HP-35 calculator with reverse Polish notation (the best!), and a TI-55 calculator. Thee’s a couple of more modern scientific calculators around, too. I never use them.

Car mats: the can match or compliment the current carpets in the car. Are they also blue? And the floor mats can be rubber or a carpet material. It’s up to you. I wouldn’t worry about the gas pedal. It’s not a Toyota. A thick pile may not be available, and it would be hard to keep clean.

The sun shade either folds out or is cloth with a wire ring that holds it against the windshield. Just fold the sun visors down to hold it in place.

Do a web search for car mats and windshield sun screens to get an idea of what is available. Any auto parts store or big box retailer should have them. You were looking for an excuse to go to Target anyway, weren’t you? I know my wife is. I suppose I should be happy her favorite store isn’t Neiman Marcus.

Ha, no, his slide rule isn’t in the junk drawer. He bought one because he was curious about how they worked – he discovered that its functions were split evenly between “stuff I can do in my head” and “stuff I’ll need the graphing calculator for anyway”, but it’s neat anyway. He’s not all that much older than the car; he just likes things that go VROOM, and apparently a Miata that’s almost old enough to drink is an affordable option.

And speaking of things that go VROOM, the Tamiya Miata looks awesome. He can drive it around his living room when it’s snowing and he has to drive the much more boring hatchback to work.

Husky floor mats are custom made for different makes and last forever. The do a great job of confining water without allowing it to leech into the carpet till you can “empty” them yourself. If they don’t have the model, try Weathertech. Mats like these are indispensable for we neat freaks.

But the odds are he already knows about miata.net, so:

I’ve got it! After looking at the picture you enclosed, I came up with the perfect gift! Go to the party supplies store and get him a giant toothbrush!

Yes, that was my suggestion for a gift