Finding the cause of the tire failure can depend on how much if the tire is brought to the shop.

This one is mostly complete, has a screw in the tread; 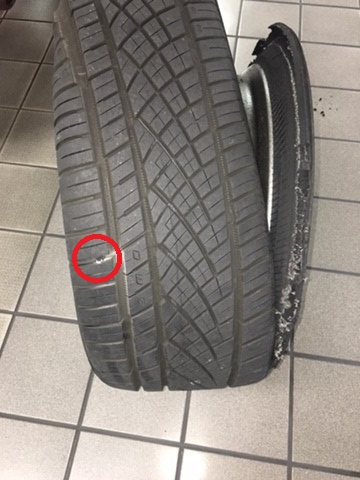 These are good ideas for me to follow up on.

Yes, we have a third new tire. Though we are still seeking a path through this maze, our plan for the moment is to go back to the Subaru place and go over the whole thing, asking some of the questions that have been raised here, then proceed through the tire dealership that holds the warranty on the most recent blown tire.

The tire shop that sold you the tire is not interested in what another shop says. They have guidelines they have to follow to get reimbursed for the replacement tire .

Have the wheel inspected and if there is nothing wrong with it then just move on . You had 2 tire problems , things happen that no one can explain.

You had 2 tire problems , things happen that no one can explain.

+1
And, as our resident tire expert, Capri Racer, mentioned…

First, the Right Rear position is the most likely position to encounter debris. It’s nearest to the edge of the road and debris kicked up by the front tire tumbles into the rear.

Second, while it seems impossible, the odds of 2 tires failing in the same position within a short period of time is not only not zero, but is probably in the million to one category - BUT - there are 250 million cars on the road in the US - ergo, it is more likely than you might think.

In any event…
Scheiße passiert

Hitting a curb or a pothole at just the right angle could cause the tire to distort enough to temporarily lose the seal at the rim and go flat. Happened to me once when pulling into a driveway. The curb was not properly formed at the driveway. If the rim gets damaged, it might seal well enough to hold air, but that rim may be more susceptible to losing the seal.

Update: took the vehicle to the tire company we trust most and asked them to mount and evaluate the “blown” right rear tire, the wheel, rim, the sensors, and any related parts. They could find nothing wrong with any of it other than the right rear sensor. They replaced it but could not program it because oddly their system has no software for the 2014 Subaru Forester. They have every other years model and tried the ‘13 and the ‘15 software but neither worked. So, unprogrammed, the sensor light remains on and the sensor is useless. We will take it to the Subaru dealership when we can get an appointment.