So I bought my car (2013 Mini Cooper) a year ago from a car garage and three days after I bought it the half filled engine light came in and my car had reduced power. I brought it back and they told me that I wasn’t reving the car enough and to rev it more and it would go away and it did for a while but it came back and has come and gone since. It was due a service so I brought it to my local mechanic thinking maybe this was the problem but the light came back on and again has since been coming and going. I brought it to the mechanic again and he ran it through the scanner and the code (P115d) came up which is the MAF so I got a new one and it still didn’t go away but I had a little bit more power than before so when he scanned it again, a code for a leak came up and when he checked it he said that there was a leak in the air pipe (he used a proper word but I can’t remember). I got a new pipe and now my car has full power but the half filled engine light is still coming on. He scanned it for me today and the P115d is still coming up. Does anyone know why this might be happening? Thank you in advance

“Not revving the car enough” is a nonsensical answer. Don’t go back to that garage.

I’d take it to another mechanic for a fresh diagnosis. Be prepared to pay a fee, and possibly for parts.

You need to find someone who can follow the steps. Cut and pasted below. Sometimes there may be more than one leak and which is not easily detectable. May take some digging or a smoke detector to find. He replaced the MAF but the problem may be in the wire or wire connectors to the MAF.

Make:
MINI
Code:
P115D
Definition:
Mass Air Flow Rationality and Range Monitoring
Description:
The MAF rate into the cylinder is calculated and is dependant on the engine speed, valve-lift, the intake CMP, the exhaust CMP, and the manifold pressure. This calculated MAF rate is also corrected, which depends on the IAT, the ECT, and the manifold pressure. The ratio between the measured MAF and the calculated MAF needs to remain within adjustable minimum and maximum threshold values. When these threshold values are exceeded, a time counter is incremented. When this counter reaches its threshold value within one diagnostic cycle, a MAF meter malfunction is detected.
Cause:

Did you are a previous owner install a cold air intake or a K&N filter element? Also if not, have you tried a new air filter?

When the new MAF was installed, did the mechanic disconnect the battery so that all PCM memory was erased. My experience is that with a new MAF sensor, this helps.

Is your idle higher than normal, 200 rpm higher than normal? If it is, that is an indicator that you have a leaking intake manifold gasket or a leaking O-ring around one of the fuel injectors. If the idle is normal, there could still be an air leak around the throttle body gasket or IAC (Idle air control) valve.

One more thing, more things but this is one I’m thinking of is the return air tube for the PVC system. It is a rubber tube that goes between the valve cover and the intake duct.

“Not revving the car enough” is a nonsensical answer.

+1
However, until the OP explains what a “half filled engine light” is, I doubt if anyone here can help him. 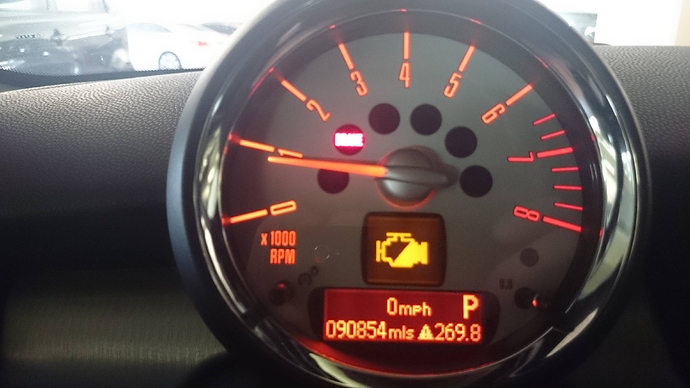 This is the light I’m talking about, I’m a girl too btw so I have no idea what it’s called

This is the light I’m talking about, I’m a girl too btw so I have no idea what it’s called

I’m a guy, and a pro mechanic- and I have no idea why that engine icon is half filled… I’ve not seen one of those before.

The half-filled CEL on a Mini is the Reduced Power Indicator.

“The Reduced Power light indicates when the engine management system detects a fault that is far enough out of parameters to cause the system to “protect itself” by reducing power output. These faults are recorded in the system, but are not accessible with a common OBD-II fault code reader. If the Check Engine light has come on as well, there will be an OBD-II fault code recorded in addition to the non-OBD-II code (that caused the Reduced Power light to illuminate). If there has been no Check Engine light, there will be no OBD-II codes generated.”

A code reader that can read the non-OBD faults is needed.

If it helps, I only got a new air filter put in when I got it serviced in May and my mechanic checked it and said that it’s fine. The engine light only comes on when I start going up in gears and when my speed increases. Normally when that light comes on I instantly have limited power from the car but I still have full power when the light comes on now. Both myself and my mechanic are so frustrated as to why this is happening as when he runs the scanner, the same code is coming up for the MAF but I literally just got a new MAF put in just before he scanned it so I have no idea why this is happening. I have now discovered that I have an oil leak the car too but I don’t think it’s related to this light coming on.