I read an article in today’s paper about how love changes the brain. The author, a neuroscientist, said that even loving a sports team improves our mental health. Clearly, loving you car is also good for your noggin if sports teams are. So go ahead and love your ride. It’s good for you!

I love my Accord as a commuter car because it’s comfortable, gets great gas mileage, and handles well for a family sedan, even though it has a CVT. I loved my 1976 Porsche 914 2L too. Acceleration was poor and lots of stuff broke, but handling was amazing. That was enough to overcome the faults for me. The faster I went, the better road feel I had. I’ve never had a car before or since that rode like that. Got any current of former lovers you want to disclose?

'75 Oldsmobile Starfire 3.8 liter V6 with a 4 speed. Based on a stretched Vega, first year GM car with those typical problems.

First car I rebuilt and hot-rodded the engine with high compression pistons, hot cam, 4 barrel and headers. Lots of fun to drive. Rust prone as were all cars of that era. First white with red interior and then metalflake red.

I guess I am in trouble mentally. I don’t care about any sports teams . I would not walk across the street for someone famous autograph . I have had and have vehicles that I like but never have any real attachment to them .

At 16 I had a 60s something Dodge Charger, 383 4 bbl. Killed it climbing sand hills. Good thing too, cause it probably would have killed me.

Older me loves my old Town and Country cause it’s got 250,000 on it and still serving me very well. I am appreciating every extra mile I get out of it.

But my real feelings go to my family.

I don’t care about any sports teams

Actually I never really loved teams but it has turned more to the opposite now. I can’t hardly stand to watch them, especially when they zoom in on their billboards during a game. Disgusting.

Bruce Williams used to say never love something that can’t love you back. I didn’t love my Morris Minor but I liked it. Even though the transmission, brakes, and engine were shot. It had a great paint job and I liked it even after I sold it.

But hey, who is going to argue with a brain expert? I’ll ask my son about it or my nephew. I do think my son loves his BMW though so he may not be objective. Oh and never name your car or lawn mower or dishwasher. It’s just silly and no one cares what color any of this stuff is. I gotta go work on my yellow wheel barrow named
Tess.

I’ve had my 2002 Miata for 17 years so far and to this day I have not been at all tempted to replace it. Like @jtsanders Porsche it drives really well, and unlike his Porsche it isn’t troublesome. Starts, runs well, stops well, doesn’t leak, looks nice and feels like a go-kart. Love? That’s going a few steps farther than I feel, but I do like it a lot. And it’s unlikely I’ll get all wound up about modern politics or current events when I’m driving it.

The author, a neuroscientist, said that even loving a sports team improves our mental health

As a fan of a certain collegiate team that is generally mediocre in most sports, I think that neuroscientist is wrong. The last few football seasons have been especially bad for my mental health.

I like all cars, with the possible exception of the 72 Chevy I had. They are amazing inventions and when well used, a great bargain for what they accomplish. I got a years worth of daily transportation and went on vacation with 4 people and a dog, all our gear in a car I bought for $20.

I really enjoy watching football, playing it was fun too. I rejoice when the Bill win and I like Penn State and Michigan as well. I always watch Ohio State, just to make sure I see it when they lose.

I know of no other state that preys on truckers like Ohio. The only speeding ticket I ever got in a truck were in Ohio. The fastest one was for 63 in a 55 on the interstate.

They close up every other rest area but don’t block the entrance or exits and wait for them to fill up with tired drivers that need a nap to be safe on the road. Then they ticket all the truck and make them leave the rest area so they can get more trucks to ticket.

I will not buy food, gas or a hotel room in Ohio, nor will I knowingly buy anything made there.

I read an article in today’s paper about how love changes the brain. The author, a neuroscientist, said that even loving a sports team improves our mental health.

Do you need a weatherman to know which way the wind blows?

I heard about women who loved their stickshifts.

My wife named the hot water heater downcerller “Howie”. Why? I have no idea…and I don’t ask.

I’ve had several enjoyable cars but the one that I’ve stuck with for over 35 vears is my 1952 MG TD.

Not much horsepower, no safety equipment, no power assist anything, no radio, no A/C, no heat, just pure 1930’s “swoopy” design and the immediate and total connection between the car, driver and the road.
The same attributes that made the early Miatas so popular.

I named my PT Cruiser “Pathetic Loser”. All my other cars were called things that can’t be published here.

You need something with a T. Pathetic…T….

Let your mind wander! BTW, any idea what PT really stands for?

Your love for State (IIRC) is hidden somewhere and when they beat someone important like Alabama or Georgia it will soar to life. Like my alma mater and me. I don’t get too excited most of the time because they often lose at just the wrong moment. Then again, it’s not often a school of about 5000 beats any sports factory. A few years ago that changed during March Madness. We were ahead as time ticked past two minutes remaining. Duke never closed the gap. As time ticked away, I sat there trembling, shaking my head and saying no, no, no - it was utterly impossible, yet it came true anyway. Icing on the cake: during a post game interview on national television, Coach K was offered an out when the interviewer said Duke must have been uncharacteristically flat. Coach K disagreed and said that Lehigh won the game with better offense and defense. I could tell it hurt to say that, but he is the epitome of decency, and let us have our day in full. Maybe you’ll get one soon too.

any idea what PT really stands for? 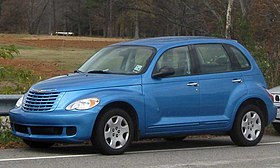 The Chrysler PT Cruiser is a compact car manufactured and marketed internationally by Chrysler in 5-door hatchback wagon (2001–2010) and 2-door convertible (2005–2008) body styles—over a single generation, with an intermediate facelift for model year 2006. Noted for its recollection of 1930s styling, the PT Cruiser was designed by Bryan Nesbitt. The interior packaging was noted for its high-roof, high h-point seating, and flexible cargo and passenger configurations—a multi-level cargo shelf as ...

Your love for State (IIRC) is hidden somewhere and when they beat someone important like Alabama or Georgia it will soar to life.

Oh, yeah. We beat A&M and Auburn last year. High points. But on the other hand, we lost to Memphis and almost lost to…LA Tech if I recall. Fun to watch, but the ups and downs (and close games and come from behinds) were probably not good for my mental health! I’m a fan either way, win or lose. Us fans of mid to lower tier SEC teams are a hardy breed

Tell me about it. As you may recall, I’m a Gamecocks fan too.

A couple of cars stand out for me:

For some reason I’ve never really had an emotional attachment to a car. If my cars are easy to service & reliable I like them, that’s about it. My gf however definitely gets emotionally attached to her cars. She was very sad for several months after selling her 25 year old Nissan Sentra, which had become unreliable and had lost most of its paint.

I have a love hate relationship with cars. It has kind of waned over the years. Loved my 68 cougar xr7, hated to see it go as rust killed it. Liked the ranchero I put the engine into, loved my trailblazer, so reliable, liked the f100, loved my 71 Nova, like my rav 4, wife loves the Acadia limited, I have no feelings as long as it works.