Interestingly, in the past few months I’ve been seeing an increasing number of brand new looking Jeep Gladiators and to a lesser extent Jeep Renegades.

Don’t know if it’s a fad, local or otherwise, or due to available supply of new Jeeps versus other makes and models.

I do know that driving along the nearby “dealers row” of multiple new car dealers that they all seem to have very, very, very few vehicles of any model on their lots. They have mostly used vehicles spaced out to try to not look utterly empty of inventory.

Anyway, the Gladiators look distinctive in a boxy sort of way.

I’ve seen a number of Gladiators, too. They look looooonnng to me, not what I expected for an ‘off road’ pickup.

I guess they were trying to make a modern version of the. Jeep Comanche pickup 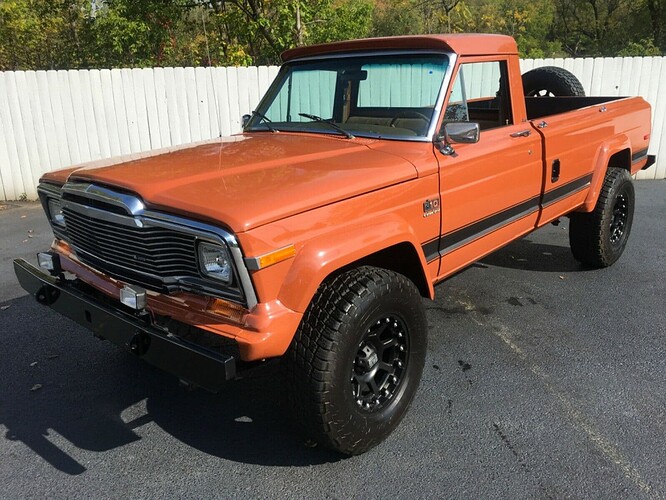 Maybe it’s a man-thing. I watch re-runs of that TV game show “Concentration”, the big prize is one of 6 or so different vehicles. If there’s a man contestant, pretty obvious the Jeep is the one he wants to win. Ford’s new Bronco is starting to make a pretty big showing on the San Jose area’s streets. Pretty common. I’ve only seen the 2-door version though, no 4-doors.

Personally, I think the Gladiator is a solution in search of a problem…

But then, I’m not a Jeep guy in general.

I’m starting to see a significant number of them in my area, also.

A few blocks from my house, there is a family of Ford enthusiasts, and they recently added a Bronco to their collection of Mustangs, an Explorer, and an old Lincoln LS sedan. Since they just placed a for sale sign on their Explorer, I guess that it’s the replacement for the Explorer.

I’ve always ended up with a sedan, the first being an econobox family hand-me-down and the three times I’ve bought a car.

Lots of test driving each of the times I bought a car. I included small, mid-size, and large sedans, as well as small and mid-sized SUVs. A combination of driving preferences and finances to buy, insure, and maintain the vehicle long term always has led to my choosing a full to mid-size basic trim level sedan.

However, given the percentage of gigunda-sized SUVs and trucks on the roads here these days, I confess that a somewhat taller ride would be nice at times.

I neither need or can begin to afford to replace my very nicely reliable Camry but I am tempted to take a Gladiator and/or a Bronco for a test drive sometime just for the fun of it. But nothing I need a ladder to climb in and out of like full-sized trucks and some SUVs are.

My problem with Jeeps is they seem to be the ultimate “Image” vehicle, at least around my part of the world.

9/10 of them that I see are heavily “accessorized” to look “rugged”…yet none of the accessories are scratched, dirty, or even look like they’ve been used. I’m referring to winches, tow hooks, LED light bars, and that sort of thing. The Gladiators I see driving around never have anything in the “truck” bed.

Maybe it’s just a personal thing…but it just seems silly to me to spend so much money on a vehicle that you never use for its intended purpose. Yet you’re trying to convince others that you live that “lifestyle”.

All hat and no cattle, to use a phrase.

One of those Jeep accessories - a grill to give it ‘angry eyes’…jeesh.

Gladiator’s are mostly what the local Jeep dealer has right now, i’ve seen several on the road. Specialist dealer had one of those 2dr wrangler pickup conversions years ago which looked to be a more appropriate size for off roading.

Now that the pick up trucks from the traditional auto makers have mostly become lower riding passenger vehicles, with manual transmissions no longer being available for the most part, the Gladiator must have taken over what the pick up truck used to be.

I imagine that we are still in the chip shortage. Maybe Stellantis can make more money from Gladiator sales than other Jeep models. I recall that at the beginning of the chip shortage that Ford preferentially build F150s because of the significant markup.

A few months ago, I posted something about a low-mileage used Gladiator that the local Jeep dealership had priced at some sort of astronomical price. (Maybe $60k??)
Right now, they have no Gladiators, one Renegade, about 20 Compass models, a bunch of Cherokees, a handful of Wranglers, and a couple of Grand Cherokees.