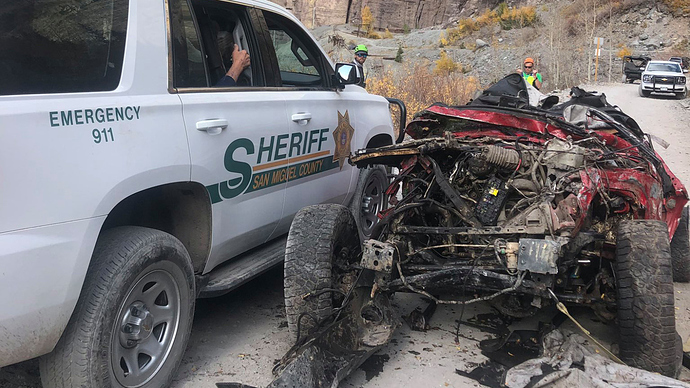 Two people were injured after a Jeep rolled off Bridal Veil Road and down several switchbacks.

turned engine off and applied the emergency brake

Ummm… No, he did not. I have a hard time believing both systems failed at the same time whether an automtic or manual trans. Nope

Accident reconstruction will be able to tell if the parking brake was set. Also if it was an automatic in park. A manual in gear might have popped out of gear if not set properly. I am with @Mustangman, both systems did not fail at the same moment

I really don’t think the make of the vehicle has anything to do with the accident, just a 22 year old who doesn’t have enough interest in cars to even think about how they work.

When I was young we thought about cars and cirls and what kind of car would get the girl. Cars we understood, girls we didn’t. For me, all these years later, not much has changed.

@Robert-Gift - No one may agree with me but I don’t care. Your heading led me to think that this was about a vehicle problem . But it is about a mistake that caused serious harm to a woman because the driver is an idiot. It is as if you are making light of this tragic event to me .

It did not say he put it in park or in gear. If he left the keys in the ignition he could have turned off the engine in drive , set the brake and stepped out,

That’s the kind of thing my brother and his wife constantly do . . .

And it must have been fate that 2 such bad drivers met each other . . .

I wonder why the passenger could not reach over and grab the wheel?
Normally it is a bad thing to get thrown from a vehicle, but in this case it would have taken hours for the “jaws of life” to free her in that mess.

Oh well, I seldom use the parking brake especially in the winter. See no need to with “park” and don’t like it freezing up. Besides on more than one occasion I’ve driven away wondering what the beeping was for, then seeing I didn’t release the parking brake. I don’t trust them.