Politicians put on their thinking caps, say “that’s no problem”. What could possibly go wrong? … lol … 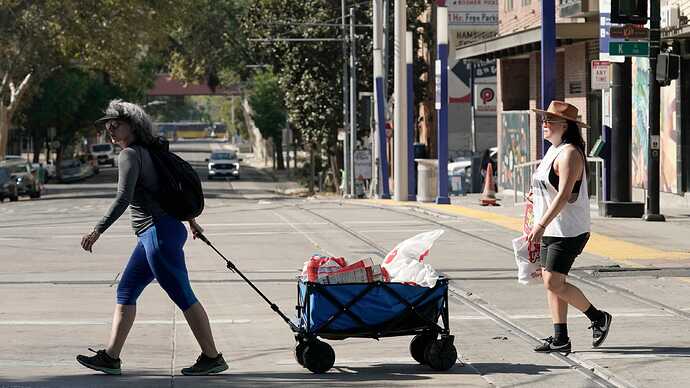 "The Freedom To Walk Act" was signed by Gov. Gavin Newsom last week, allowing people to jaywalk as long as there is no danger of a vehicle collision.

Interesting to note that dogs prefer crossing in the middle of the block, where they can see traffic from 2 directions, instead of 4 way intersections.

Once again, proof that my dog is smarter than I am.

George is just trying to start a fight. You have to look at the reasoning behind it and I didn’t even read the article. Home free as long as you don’t steal more than $1000 at a time. This is the national model. What could go wrong?

According to the reasoning (as I read in the story), Calif politicos think the current jaywalking law is often used to harass Calif’s poor, rather than an actual concern about jaywalking safety. Police allegedly have been issuing tickets for minor technical jaywalking violations, such as starting across the street after pedestrian crossing signal switches from down-counting numbers to a flashing red hand. The other reason cited is b/c the politicos think Calif citizen’s health would improve if they walked more. No disagreement about walking to improve health, or that police may be using jaywalking technical violations for reasons other than safety, could be the case, but seems like there are other ways to address, other than saying jaywalking is now perfectly legal as long as you try not to get run over.

If interested in the technical violation aspect: Typically the way the pedestrian crossing signs work at major intersections, you press the request to walk button, you can’t go immediately b/c there’s a steady red hand showing, then when it is time to cross the light shows green or “ok to cross”, then after a few seconds it shows numbers counting down from 30 or so, indicating how many seconds left, then when it reaches zero, it shows a flashing red hand meaning to quickly get your crossing completed.

In my little town by the lake you have to be alert driving downtown at night or you’ll hit someone.

Years ago when I was 18 and arrived in L.A., Calif with two friends, we learned that as soon as you stepped off the sidewalk to cross a busy street, all the cars would come to a stop. We were very surprised.

A policeman saw us doing it and immediately issued each of $5 Jaywalking tickets.

Colleges and universities could raise revenue and reduce tuition by a considerable amount if the students were fined for jaywalking. Students cross busy streets anyplace they choose oblivious to traffic and busy on their cellphones.

Might be a good idea. We aren’t allowed to even touch our cell phones while driving, so maybe it should be extended to while walking.

A couple years ago a girl on a bike just about ran me over in the church parking lot looking at her phone while riding. When I asked her she was looking for Pokémon or whatever that craze was. Still dead is dead by whatever means.

Pacific Avenue here in Olympia is 5 lanes wide and until a few years ago had long stretches between crosswalks, our former co-worker Harvey tried to cross five lanes of evening traffic and was hit by a vehicle, another co-worker was a witness from 3 cars back and didn’t find out it was him until later on. He passed away a couple days later in the hospital.

The good from all this is there’s now a crosswalk with a little spot in the middle to wait right about where it happened. Some roads do need more crossings than just at intersections. Both driver’s and pedestrians need to watch and be aware of who’s around them.

Allowing people to Jaywalk as long as there is no danger of a vehicle collision.

That is way too open to (mis)interpretation. And with all the “cell phone” walkers there is always a danger of a vehicle collision, even if the car is parked. Then there will also be:
Driver: they just came out from between those 2 parked trucks, I didn’t have any time to even react.
Pedestrian: I thought the car was further away.
Cop: No worries your both getting a ticket.

Years ago when I was 18 and arrived in L.A., Calif with two friends, we learned that as soon as you stepped off the sidewalk to cross a busy street, all the cars would come to a stop. We were very surprised.

Don’t try that these days. Things have changed in California a lot in the past 10 years. Rudeness rules the roost now.

I’m a frequent observer of urban and suburban traffic in these parts. Either while driving from the lofty seat of my truck, or cycling or as a pedestrian. Jaywalking is quite frequent in the San Jose area, and causes several problems.

I’m guessing what’s motivating the “jaywalking is ok” nonsense from the politicians, traffic fines here are through the roof. Even an illegal right hand turn violation, easily will net $400-$500. So folks committing minor traffic offenses get these fines and complain about the financial abuse to the politicians. Politicians respond by making it no longer an offense. Instead, they should reduce the fines to something more reasonable, and for things like jaywalking, coasting through a right hand turn on red, first offense is a warning only. Second offensive, you get a fine.