Is this a faulty repair?

My son hit a curb going just a few miles an hour (he says). This caused his tire to come off the rim and shred as he drove on it for 30 feet or so. in looking under the car his inner and outer tie rod has separated. Doesn’t look like it broke or bent, just came apart where they screw together.

This tire/suspension was repaired 2 months ago. is it possible it was not repaired correctly and the act of making a sharp turn at low speed caused them to pull apart? 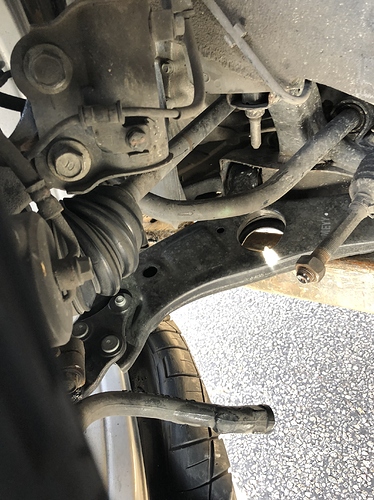 I’m not an expert and would welcome some opinions on this. Thanks.

Wait, it broke again after the curb damage was repaired? Or it was repaired a couple months before your kid hit the curb?

This is important. I certainly didn’t tell my dad when I launched his van off of a railroad crossing that I didn’t realize was up a slope from the street’s level until after I was already in the air.

I bet he smacked that curb at more than a few mph, and I also bet that, if the pic is from 2 months after the curb incident, he wasn’t making a low speed turn when it broke again.

Check the tie rod on the right side, you may find that there are no visible threads, if so the rack and pinion is way off-center. How did it get that way? Did they disconnect the steering column for some reason?
The only new parts that I see are the lower control arm and ball joint.

So how much of the threaded end of the inner tie rod remains in the outer tie rod end?

I’m curious about the time line and the difference between “hit a curb” and “making a sharp turn at low speed”.

Thanks everyone for your comments. To address a few of the questions

One scenario is the tie rod was not fastened properly… That act of a full turn at low speed, coupled with hitting the curb caused the joint to separate. This put the tire off kilter and driving a few feet with the weight of the car separated it from the rim, then the rim drug on ground. Does that scenario seen possible?

Of course the other scenario is he hit the curb and everything was caused from the impact. Not my first teenager!

Yes I launch from a RR crossing, front suspension bottomed out. Luckily nothing broke but had some wrinkles in the REAR quarter panels. 59 Catalina 2 Dr HT

Nevada,_545, why did You have to beat me with one minut. You are absolutely correct

If tie rods were replaced two months ago, this repair was not done properly. The separated piece does not look broken, it looks unscrewed. This tie rod repair was going to fail at some point, because it was not installed with enough thread to hold it in place. By the grace of God- your son was travelling at low speed and not at 80 down the freeway.

I would take these pictures and tell the repair shop to buy you a new tire, and that they need to pay to get the repairs done and checked. Then go somewhere else to get this repaired, and have the first places work checked. If the first shop balks at any of that, tell them to expect a call from an attorney.

I’m glad your son is ok. This could have been much worse.

A closer look might change my mind, but I enlarged the picture and have to agree with the consensus here; it looks to me like the tie rod was literally “hanging on by a thread” (or three). That’s not proper installation.

I also suspect he was going faster than he stated. It’d be pretty tough to knock a tire off a rim at a few miles per hour. I too was a teenager once, and sometimes teenagers tend to alter reality when describing a boo-boo.

The trick is in determining how much of the damage is workmanship related and how much is curb related. IMHO you’d be hard-pressed to prove that the workmanship is the root cause, even if it actually is. Bumping the curb hard enough to pop the tire’s bead kind of leaves you with a weak argument.

My suggestion? Thank God that your son is unharmed, talk with him about the accident and let him “unload” his conscience, and move forward with a repair… at a different shop. Dragging the shop to court also means dragging your son to court, and if it were me I’d be reluctant to do that. My guess is that he’s been through enough.

I think everyone here has determined correctly that the tie rod end was not installed properly.

Looking at the picture, the first thing that I noticed was the shape of the “Tie rod end” itself.
I don’t ever remember seeing an “S” shaped Tie rod end that I’ve ever replaced.

I would never take any auto back to that place because the tech should have seen the bent tie rod end or at the very least known that he/she should not have to do that much adjustment on a new tie rod end replacement.
Check your bill from two months ago. If they charged you for new tie rod ends…they took you for a ride.

There’s no doubt that someone did a poor (dangerous) job, but I don’t believe it’s bent before the fix. There would have been visible signs in the metal and cracks in the paint and I have seen many different shaped tie-rods. In this situation I think it’s made this way to make space for the rim at full tilt. At least it is very easy to check. It’s just taking a look at the other side. 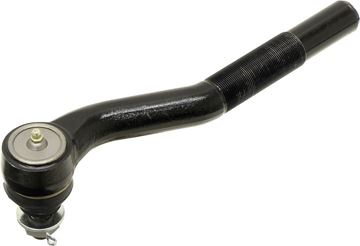 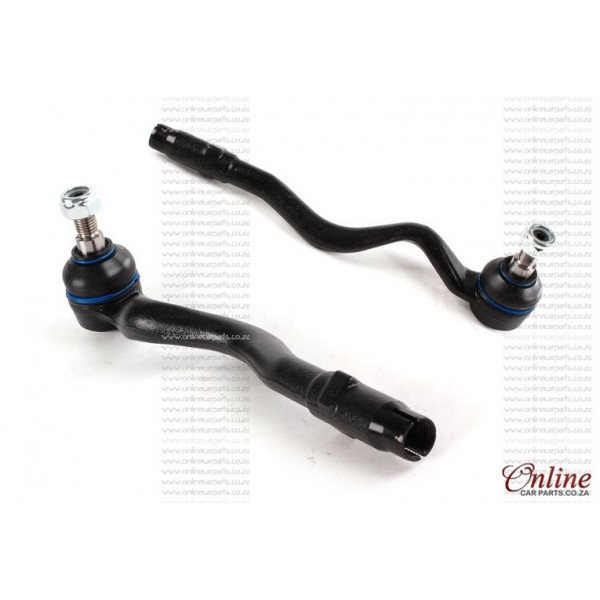 I would add in that it is a very safe assumption that the tie rod came apart and caused Junior to lose control of this vehicles steering and then hit the curb.

Hi eddo, that is what I’m thinking as well…the rod came apart first. When that happened the wheel tilted drastically inward, which put a lot of pressure on the tire sidewall, causing it to come off the rim, then exposing the rim to the concrete. Of course I don’t have any way to definitively prove it, but I do know those tie rods should never separate like that.

I guess I’ve not encountered one with such a curve as shown in the OPs picture.

It would be impossible to drive a car with the tie rod even .250" out of adjustment. The toe. In/out would be about 4x the deviation of the tie Rod length.

I think that, that’s a fair conclusion.

which put a lot of pressure on the tire sidewall, causing it to come off the rim, then exposing the rim to the concrete.

That would be a wrong conclusion. For that to be true, then any car sliding sideways on dry pavement - say in a turn - would loose all tires sliding and we know that don’t happen. Just think Steve McQueen and Bullit.

I am confused as to the sequence of events here. Was the curb hit 2 months ago or was the car repaired for some other reason 2 months ago? Exactly what repairs were done?

That’s where I was going, @NYBo - for the tie rod to be 2 threads in would seem to mean there was major misalignment or damage somewhere. I don’t see a sleeve that could have been misadjusted to let this happen.