Is there after market inlets

decided to call the people who made the kit for my car years back, hey what turbo part # was with the kit.
Got the number, it came, it has flanges on it instead of inlets and outlets for the oil like the old model.

is there an adaparter?
where would they be sold?

would there be a way to fabricate the hoses to the flanges, if that isnt an option.

Trying to read this post. I guess you received a Turbo that does not match the one you need replaced. Other than that it seems the place you bought it from might have the answer .

It matches, was still sent a G25

but instead of inlets where the hoses attach, it has flanges instead.

Then it doesn’t match!!!

there’s no possible way to adapt any of these parts together?

I could go back to square one, but not really sure where to go for the part number.
Essentially the garrett doesn’t have a part number or tag on the piece.
So we called TSI, since i got a tsi extreme turbo kit, they should know what turbo came with my kit.
Ordered the part number he gave me, now the issue is the oil lines, and lines dont hook up to flanges so. Kinda feeling SOL right about now besides sending the turbo to garrett themself. but they dont have a company phone number, so that might have to be figured out over email if that was the case.

You can adapt anything to anything else. Takes tools and talent. Or it takes google to search for adaptors. Or another turbo with the correct fittings.

Understandable, im moronic when it comes to aftermarket. regular car parts, I understand.

So could there be the same turbo part number with the right fittings on it?

You didn’t tell us what part number you actually used… Just G25 doesn’t cut it.

You ask about adaptors but describe nothing about adaptors for what… oil lines, water lines, blowoff valves, housings, or what. No pictures to describe the problem at all.

You admit you are not up to the task of selecting the correct turbo.

You have found out the world of aftermarket parts is not the same as OEM.

I would suggest you either get professional help here or get a lot better describing your problem so we can help you.

oil lines for inlet and outlet of turbo, however this turbo has flanges not outlets

Call them back, describe that what you got is not usable, and why, and ask what they can do for you. Good luck.

You did notice there were no pictures of the oil inlet, right?

I shall assume that 2 bolt flange is what you are describing. So tap the holes un tge turbo for pipe threads. Disaaaembke it first so.you don’t get chips in the bearings. Use AN fittings to connect the inlet and outlet oil lines. Or cut a 3/4 in plate to match the flange out of aluminum oe steel and tap that.

Yep i got the part number, didn’t take 2 seconds to check the picture, decided mechanic and the turbo kit seller has to know. and cannot get the wrong part number so yep. know well how stupid and nonsense that was, use to getting oil filters with part number and not having to think about 30 different filters under the same name or number.

here’s old turbo on it, looked thru phone and only had one picture of the engine bay 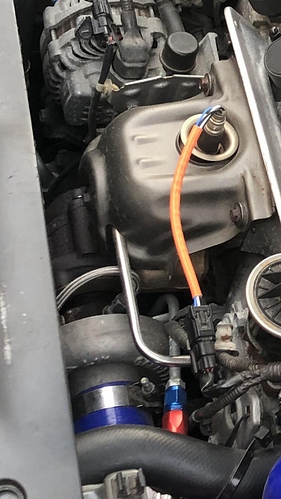 Is it worth dealing with or should i just send the turbo in and have garrett themself tell me which one it is. and just order the correct one.

I trusted the mechanic since supposedly he called the turbo company and asked. So trusted him then my own research but my turbo kit
https://www.turbokits.com/Honda/Civic/Turbo_Kits/TSI_Extreme_Turbo_Kit/274/
says journal bearing idk how many G25’s are journal.
leads to this turbo after googling the name
https://www.turbokits.com/Turbo_Chargers/Garrett/GT_Ball_Bearing/Garrett_GT2554R_(aka_GT25R)_Ball_Bearing_Turbo/1092

I mentioned this part number to him a week ago, since i wasn’t sure, he called TSI and asked them what turbo goes on an extreme kit for honda civic.

But since theres couple engines for my car i assume maybe thats what happend. Have no clue.

If you were in my shoes what would you do? return and send in turbo, get part number confirm and order? try to adapt the one i have right now?

If turbokits.com can’t supply you with a direct replacement turbo charger then you will need to buy oil lines with flange mounts, this can’t be such a big deal.

Still no pictures of the actual oil inlet…

Is this the Civic with the aftermarket turbo? Did it already have the turbo when you bought it? If so, might be hard to figure out who did the install.

You might have some luck at Temple of VTEC (https://www.vtec.net/forums/forum?forum_id=3529) finding someone who’s already familiar with what you had, what you have now, and how to adapt the old lines to the new.

Else do what @Mustangman said and take it to a speed shop and hand them some money.

called mechanic after you guys have done an awesome job explaining the parts to me, now this phone call i came in more educated. and i appreciate each one stick around, helping an ignornant learning car guy. Whether its rude or dumb, i gotta learn some how.

so today during phone call mentioned that i found t25 flanges i assume they fit G25, so brought that up to him that theres adapaters for the kit.

I asked whats the other issue with turbo

Inlet has a (used a specific word) basically the inlet is bad, but outlet is still good, so hes gonna try to look and find a inlet thatll fit everything

so your right cant be that hard, just need 2 parts that are a little more extreme to find.

so all seems to be good, ill update if anything else comes along.

also turbo/car is at the shop sorry i didn’t have a good picture to help you guys guide me. but once again thank you for what information has been given so far!