My son has a 2000 Chevy Impala with a 3.8L V-6 and it has a cronic stalling problem. The car will be running fine and without any warning, stall out. Generally, it stlls when ever the engine is at idle, either coasting or under no load, or coming to a stop. It is very dangerous driving, making a turn when the power steering fails. Each time this has happened, the OBD DOES NOT give any fault codes, since the MIL (Malfunction Indicator Lamp) does not light up! We’ve replaced the crankshaft sensor, MAF sensor and AIS motor, twice and it still stalls. It will clear itself and drive fine for 10 minutes or ten months. All wires and connections are good. Does anyone out there knows what’s going on with this car?

I have seen some of those 3.8’s have issues with the ignition control module. Take it out, visually inspect it and have it tested at Advance or AutoZone. Sometimes they develop a short or excessive resistance and get so hot they melt the epoxy, but still run. This is a part I would think long and hard about throwing at the problem since it is expensive, but it is a possibility, even if it tests good. Maybe you could get your money back on the MAF you didn’t need and try a module? I think the module costs quite a bit less.

You ruled out the other possibility in my mind by saying all the wiring looked good, but I’m still going to mention it. Some of the 3.8 Impalas had their wiring harnesses at the front of the engine compartment mounted too close to the exhaust manifold. Sometimes it even causes the black convolute or wiring insulation to melt. This will cause the symptoms you are experiencing, so you may want to double check that as well.

Thanks for the tip about the ICM. I did find a torn gasket on the MAP sensor yesterday, so I replaced it. But it didn’t change the engine stalling. I also talked to a supervisor at the sheriff’s garage (they have several dozen Impalas). He said he was going to check with his people about the stalling issue. He also said they had been having problems with the ingintion switches (dash mounted on police vehicles) that were also flashing a security code in the IC. Ours is doing the same thing, but has not triggered a lockout yet. He said the problem was in the switch not reading the key codes and shutting down the car. Wonder if it is possible I have a bad ignition switch?

That’s the fun thing about switches (ANY switch). A switch can be intermittent any time it pleases.
Take careful notes on the symptoms. Does the engine ever misfire, stumble, or jerk at speeds above crawl? When the A/C is switched on, does it slow the engine? It shouldn’t. There’s a switch for that.
When the wheels are being turned, at slow speeds, there is a power steering switch which sends a signal to the engine computer. In response from this signal, the engine computer boosts engine power.
You need a good mechanic to chase these circuits which the engine computer doesn’t monitor.
The fuel pressure may be low. Be sure there is a clean external fuel filter, and check the fuel pressure.

Yeah, tons of fun! I actually tried jiggling the ignition switch many times yesterday, to see if it would cause the engine to die while running and there was no response, so I assume the switch is not an issue with the stalling. The security message may be another issue in itself. Occasionally the engine does run rough after a re-start, usually after the fifth or sixth time.
The engine rpm’s do kick up when the A/C is turned on. Can’t say whether or not the same thing happens when turning, because the car is usually slowing down to make the turn. I’ll have to try that stationary.
I am that mechanic, been working on cars since 1967 – yeah I’m an old fart – and class 8 trucks since '72. I’m lucky, I get problems that most mechanics have never seen, and done them more than most will ever see. Just lucky I guess. What ticks me off is the fact that the GM dealerships are no better at fixing their own brand – I’m a Mopar Man – than I am. If you build it, you better know how to fix it! I worked building cars at Chrysler for a year and a half – couldn’t take working in the jungle, where car floor pans, sides and roofs are all put together and welded – but had to be outdoors.
It’s been a while since fuel was checked, but doubt if that is it, when running the car takes off like a super stock car. But at this point, it really is “bake to basics” with this car. Assume nothing and check everything, again! Thanks for your help & time.

I did check for TSB’s on your car and sympton, no hits.

Thanks for looking. I’ve also looked at the “Chevy Talk” website, hoping to find someone else who has had this same problems, but so far I’ve only found a ton of other wieird complaints about electric gremlims. There were a few posiblities that I’ll check out, but I doubt they are what’s wrong.

This is one of those problems that can’t be solved by the Symptom Method. There can be the same symptoms for different problems. Guessing at parts won’t help. Testimonials may provide ideas; but, not cures. For example: For an engine no-start, is it the battery, starter, alternator, fuel, or other?
You need to take notes of everything which happens before, during, and after the engine stalls. HOW does it stall? Suddenly, or does it stumble, first? How does it perform during acceleration, cruise, deceleration? How is the performance different during different weather, and temperature, conditions? What differences are there when the engine is cold, or hot? How does it start? How does it re-start?
Have you performed the routine scheduled maintenance such as spark plugs, air filter, pcv valve, fuel filter, etc.?
Someone knowledgeable and skilled needs to go through the systems of the engine management system. S/he will check electrical (and electronic) values of inputs and outputs, and check responses of those inputs and outputs. There are tools which augment the person: electrical multimeters, scan tools, vacuum test gauges, pressure test gauges, and an inquisitive, observant, mind.

We’ve had this car to two outside shops, one of which was a Chevy dealer. Neither of them, dispite changing many parts and charging for them, ever solved the problem! This is a former cop car, as such, it is different from ordinary cars. In asking other cop car owners – both active police departments and others who’ve purchased excop cars – about this problems, they too have had this problem. One such owner, a taxi service, which will only buy excop cars because they are built better – more welds, gussets, bracing, etc. – has had the same problem and everything I’ve done is what they’ve done to solve the issue. They’ve made two suggestions which I haven’t had time to try yet. I’m also waiting to talk back to a police department on Monday, the mechanics were off Friday, to see what, if anything, they have to say. The last item in the manual that could be at issue is the ECM. Symptom Method or not, a process of elimnation is the only way to solve this issue; one part at a time; one circuit at a time, unless someone has had this problem and found the solution?

Hello, were you able to find out the problem on your car? I am having the same problem on my 2004 3.4L Impala. I have taken it to 3 mechanics and they can’t find the problem.

Yes, we were finally able to resolve the issue. But now all my hair is gone (kidding).

The problem was a failing, but not quite fully failed Mass Air Flow (MAF) Sensor. It finally completely failed, both triggering a solid MIL and fault code on the computer. FYI: I had also found other problems, such as a cracked vaccuum fitting and torn gasket on the MAP Sensor, requiring it to be replaced.

Hope this helps, because we were going crazy trying to figure it out.

Having the same issue on 3.8 2002 impala. Changed mass air flow sensor, still stalls. Rpms fluxuate more when in park vs drive it seems. Also it won’t stall if defrost is on. Pulled out all my hair got a wig, and pulled out all my wig hair! Diagnostics showed all other sensors were working properly, any advice is greatly appreciated.

You might pull the idle air control valve to see if it’s gunked up: 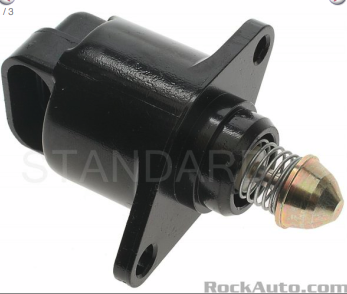 Also, look for a vacuum leak on any hose or the snorkel between the air filter and the throttle body.

it won’t stall if defrost is on

That may be b/c the engine computer raises the idle rpm automatically when the AC compressor is on. That’s done to prevent stalling due to add’l engine load. Turning the defrost on also turns the AC compressor on, believe it or not. My Corolla’s computer ups the idle speed if I turn the headlights on (or the rear window defroster) for the same reason, only in that case it is due to the extra alternator load. You might try those, see if it has the same effect. In any event it seems to be a problem with the idle speed control, so @insightful 's advice above seems an excellent place to start. If there’s any routine engine maintenance due anyway (engine air filter, spark plugs etc) suggest to do that first. Sometimes this problem requires the throttle body be removed and cleaned.

You might want to start your own thread @ImpalaTerrors , probably get better help that way. Click on “maintenance/repairs” top left above, then “ask a question” or “new topic” forget what it says, on the upper right of that page.