I just stumbled onto this, and thought it worth sharing: https://www.justpark.com/creative/is-it-illegal/

I’m surprised by some of its claims, like that you can drink alcohol in Mississippi while driving, as long as you’re under the legal limit, New Jersey and Hawaii are the only states that ban driving with a dog in your lap, it’s illegal to drive too slowly in six states, it’s illegal to drive with headphones on in 16 states, driving while high on marijuana is only illegal in 19 states, and I can’t believe it’s legal to drive while watching a DVD anywhere. O…M…G Evidently, you can legally have an open container of alcohol in your car in 11 states.

This should solve a lot of heated debates we’ve had in the past about some of these issues. You’re welcome!

I think other states should follow New Jersey and Hawaii in making it illegal to drive while having a dog on your lap. I put a harness on our dog and have a loop that attaches to the harness and goes through the shoulder harness part of the seat belt. This keeps the fog from moving all over the vehicle and protects him in a sudden stop. The dog sits in the seat behind the front passenger. My dog is arrogant and likes being chauffered like Miss Daisy in the movie.

I had a buddy get pulled over for speeding in Ohio while he had his hands-free headset on talking on his phone. The officer asked if he had both earbuds in. He said no. “Right answer” replied the policeman. Headphones are illegal in Ohio but oddly enough if you are deaf, you only need a right hand mirror to be able to drive. Makes no sense.

Mississippi may be the last state with a drinking while driving law but it wasn’t alone. There used to be quite a few that allowed the driver to toss one back as long as they weren’t over the legal limit. As you can see from the article, some states have no open container laws. Some states have the option of an alcoholic beverage “To Go” cup. Wander into a bar and take your drink out with you. I like that!

Headphones are illegal in Ohio but oddly enough if you are deaf, you only need a right hand mirror to be able to drive. Makes no sense

Driving with ear-buds is a dumb idea. It should be illegal in every state.

Driving with ear-buds is a dumb idea

I don’t disagree with that but… modern cars are very quiet inside. The best of them reduce sound to similar levels as ear buds or even headphones. So much so that fire, police and ambulance drivers are concerned because people don’t pull over for emergency vehicles.

I also have a problem with people who can’t drive anywhere without taking their dog. Or go anywhere actually.
Some years ago I was in Ponca CIty, OK sitting at the light in a congested area and some guy in a Buick turned in front of me. He had a huge German Shepherd sitting on his lap with the dog’s head out the window.
He was trying to turn while dodging his head over the dog’s back to see and clipped the center median. He almost clipped the car that was sitting in that left turn lane.

NH, and I suspect most states, has a “catchall” regulation under which driving with a dog on one’s lap can be applied, but I’ve never seen it enforced. It’s dangerous and IMHO the law should be enforced for this infraction.

OK4450, I absolutely agree with you about people who bring their dogs everywhere. Service animals I support, but people bring dogs that clearly aren’t service dogs into stores and other buildings where there may be people who aren’t “dog people”. To me that’s a violation of their rights. We had an excellent maintenance person at the college where I worked that was allergic to dogs, and she had to retire when the president started bring her dog to work. The maintenance lady had allergic reactions just from the dog hair when cleaning the president’s office.

@the_same_mountainbike. The president at the university should have been forced to retire. Good maintenance personnel are hard to get, but college and university presidents are a dime a dozen.

OK4450, I absolutely agree with you about people who bring their dogs everywhere. Service animals I support, but people bring dogs that clearly aren’t service dogs into stores and other buildings where there may be people who aren’t “dog people”.

I fly a lot and I’m seeing more and more people who get their PET declared as a service dog and they are allowed to fly with them on the plane. I LOVE dogs (pretty much all animals), but there’s a limit. Some dogs/cats I’m allergic to. And then there’s this one woman who’s dog wouldn’t stop yapping (very loudly). 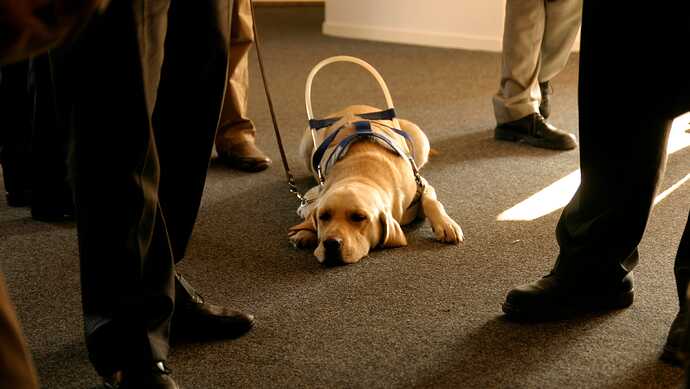 Crossing the line from pet to service animal

I fly a lot and I’m seeing more and more people who get their PET declared as a service dog and they are allowed to fly with them on the plane.

Airlines are cracking down on “emotional support” animals. Up until recently, it was far too easy to get some organization to certify your animal a “service pet,” but there seems to finally be some push-back from airlines.

Airlines are cracking down on “emotional support” animals

I still see a lot more then I did 20 years ago. Almost every flight I see a questionable service animal. Usually a small dog owned by a middle-aged woman.

I can understand bringing a dog into a pet store, but I don’t understand non-service dogs being permitted in other stores. Our local Rural King farm store seems to allow dogs that are not service dogs. I like dogs, and I seem to be a dog magnet. I have had dogs pull away from their owners and come running up to me even though I don’t do or say anything to encourage these dogs. I leave my own dog at home when I go shopping. I board the dog when we go on vacation. We need time away from him and he probably needs time away from us.

I have the luxury of having a whole lot more stories of her callousness toward people. I worked for her for 14 years (worked for the college for 17 years) and have known her for over 20 years.

But none of them are car related, so I’ll save everyone the horror stories.
Well, except for the ones where she kept crashing the college cars. She called up once for assistance because she’d crashed the car she’d rented to use in place of the college car while it was being repaired after she’d crashed it. We all secretly got a laugh out of that one. Her attitude toward driving is that everyone should get out of her way because she’s an important person. She’s an angry, extremely arrogant, inconsiderate driver.

Her attitude toward driving is that everyone should get out of her way because she’s an important person. She’s an angry, extremely arrogant, inconsiderate driver.

You’ve just described more then half the drivers in MA.

You’ve just described more then half the drivers in MA.

LOL, yeah, ain’t that the truth.

Did she also claim that none of the accidents were her fault?

We have a few vehicle operators in our fleet that keep crashing and/or otherwise destroying equipment, yet every single time it’s not their fault, or so they say . . .

I guess I should look on the bright side

Did she also claim that none of the accidents were her fault?

I’m sure she did, but for me to ask would have been job suicide!

There is a problem with legislators with 1920 brains.

They think the left lane is there exclusively for passing.

Lanes are added to increase the capacity of the road, not to provide the luxury of passing.

Requiring all drivers to return to the right lane after passing reduces the capacity to that of one lane in each direction.

+1
On another site, somebody is crying the blues because the management at his local Home Depot (allegedly) told him that his dog isn’t welcome in the store. I am an avid dog-fancier, but I realize that there is a time and a place for my dog’s presence, and that doesn’t include on my lap while I am driving and/or while I am shopping.

I agree people who take their dogs everywhere are a pain, but I just stopped at Home Depot on my way home from the dog park earlier this week, and it was nice not to have to have to take the dog home first and make an extra trip to the store. (I called first to make sure my dog was welcome.)