If you think that the potholes in your area are bad 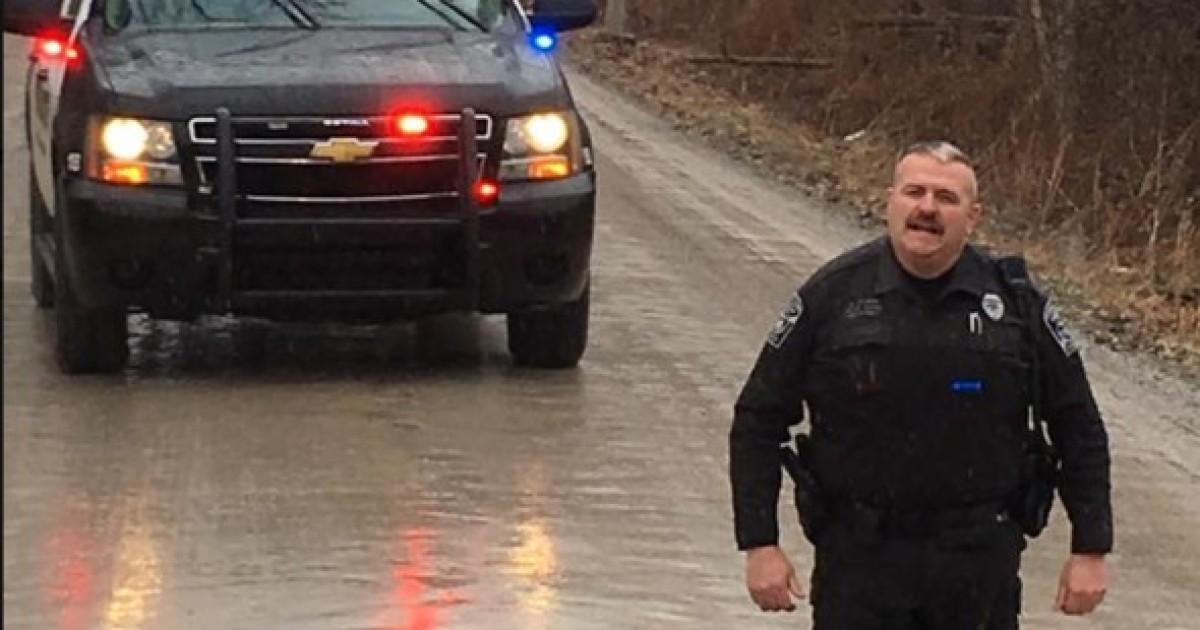 Thimgs could be worse! 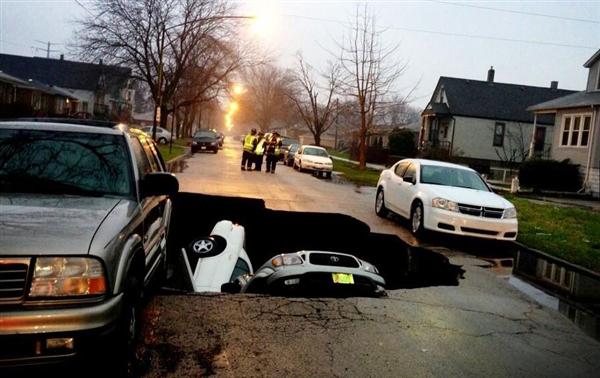 This picture is photoshoped…Don’t believe everything you see

Still funny… Sinkholes are real. Maybe not this one but…

Michigan has had issues with massive potholes and really poor roads for decades. This is kind of a dog-bites-man story. Frost heaves, poor repairs, mismanagement of road funds, and massively high road weights for trucks traveling within the state. All conspire to destroy the roads faster than Michigan can repair them.

Sinkholes in Florida have swallowed entire houses… with the owners in them.
But sinkholes are not potholes. Potholes are the result of water getting under the pavement, freezing, and lifting the pavement, which then gets broken away by vehicles or snowplows. Sinkholes are a result of erosion of the subsurface, generally due to underground water flows. Florida is loaded with sinkholes. State that experience winter weather are loaded with potholes. My town is currently loaded with them… most now filled with coldpatch. Some of the roads in Manchester NH look like they were bombed out. As they always do at this time of year.

The worst pothole I’ve ever seen was in a drive-in movie theater in Amarillo, TX. My girlfriend (now my wife) got there right after the movie started and it was already dark. Starting to turn into a row near the front I could see something that looked like a crater so I veered and went the next row down. I then pulled up a couple of rows.

About 5 minutes later some guy and his girlfriend turned into that crater while the driver was looking towards the movie.
The entire nose of his Chevy from the firewall forward dropped off in there and it wasn’t coming out. The crater was deep enough that the headlights were below ground.
After a lot of revving and going nowhere the theater management called a tow truck out to winch the guy out.

Fake @corollaguy rating, not Photoshop as far as I can tell

When I lived in New England we’d get a frost heave in the State road in front of our house. You could hear the slamming suspensions all Winter, every year. The Highway department left the Frost Heave sign in the bushes along the road all year. 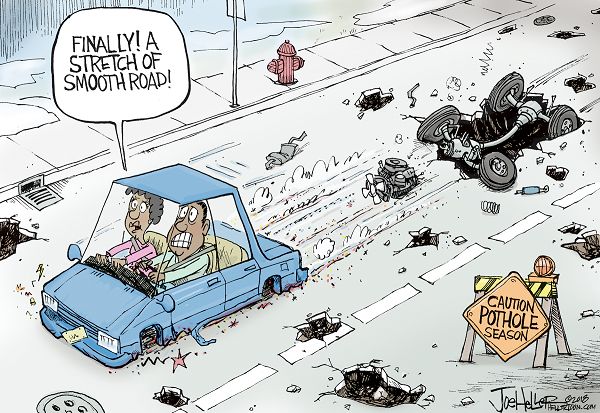 Many years ago there was a pothole on the off ramp of I-495 going on to I-93 north. They patched it every week, but patches don’t hold up very well in the cold weather. One day- while driving home from work…there was this little dweeb driving a Honda Civic right on my tail. I could barely see the top of his car. He exited 495 onto 93 right behind me. I knew about the pothole so I drove right over it with my then 98 Pathfinder…he was so close to me there was no way he could avoid it. I looked in my rear-view mirror as he drove over it…and saw his car bounce and then pull over. For fun I drove around the cloverleaf just to see what happened. There was the dweeb off the side oft the road with the front of the vehicle facing one way and his right front tire at a right angle. Oh Well…

“I knew about the pothole so I drove right over it with my then 98 Pathfinder…he was so close to me there was no way he could avoid it.”

I used essentially the same strategy a couple of years ago when a 20-something chick in a VW was driving about 5 feet behind my rear bumper on a rural road where I was already driving ~7 mph over the limit. Knowing exactly where there was a world-class pothole just ahead, I swerved at the last minute, figuring that she wouldn’t be able to react in time, and–of course–she would have no idea why I swerved because she did not have my view of the road ahead.

Sure enough, she hit that mother-of-all potholes and I heard one of her tires pop. When I returned from my run to the post office a few minutes later, I waved to her while I drove past her disabled car.

Perhaps she learned about one of the consequences of tailgating from that incident, but… probably not.

I agree, probably not. 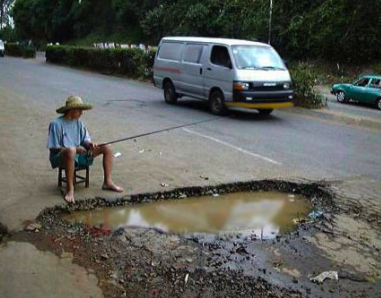