How Long to Drive Car Before Bringing It to be Inspected?

I’ve heard that if you run your car for a while there’s a better chance of passing the emissions test on a state inspection. How long should it be run? An hour on the highway? Just 15 minutes around town? We have an old car, a 1995 Chrysler Concorde. Never had any trouble passing the emissions part of a state inspection before, but I want to be prepared when I bring it to be inspected this year.

What State?? Here in NH (and many others) it makes no difference because the only emissions test is to hook up an OBD-II and see if there are any codes. No Codes = Pass Emissions.

The car should reach stable operation condition. Just get it well warmed up on a highway drive. I once failed a test with a cold car.

Get it out on a highway where you can cruise at 65 at a steady speed for about 30 minutes. That would be about 35 miles. Try to get it to the testing station as soon as possible without shutting the engine off. If you have to wait a while, idle the engine to keep the cat(s) warm. The technician should do a pretest run on the treadmill to verify that the emissions system is going into closed loop (unless he/she wants to charge you a restest fee later).

Another thing that helps pass emissions is to get a fresh oil and filter change just before the taking it to the test station. Have the shop look over the air filter, gas cap, and vacuum hoses to see if any need renewing. Also they can scan the Engine Control Module for any trouble codes that may not have set the MIL (engine light). Do not erase any codes or disconnect the battery as that would require you to drive long enough to reset all the system monitors.

In Calif., some “Smog Test Only” stations use anything in their bag of tricks to fail you because it justifies their existence to the State and generates more income.

Good Luck on this.

I usually take my Corolla on a long multi-hour 65-70 mph freeway trip a few days before the test. Prior to arrival at the testing station, on test day, I’ll drive the car a few miles on city streets, some 40 mph, some stop and go traffic, to bring it up to its heating range, and just before the test station I’ll pull into a nearby parking lot and let the engine idle for a few minutes until the fan comes on. Then it is test time.

It’s a good idea to bring all the routine engine maintenance suggested in the owner’s manual up to spec a couple weeks before the test. I always change the Corolla’s spark plugs, oil, oil filter, engine air filter, and adjust the ignition timing and idle rpm at the minimum. On my next test, since my car barely passes the HC spec, I’ll be changing the fuel filter and adjusting the valve clearances too. Googling “How to pass an emissions test” will lead you to a couple of web sites with good info. Best of luck.

According to the following website the only test would be the OBD-II test. So there would be no need to warm up the vehicle. 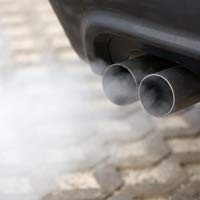 Massachusetts RMV Smog Check and Car Inspection requirements. Find out what emissions and safety inspections your vehicle will need to pass before it can be registered, renewed, or sold. Learn what to do if it fails.

I read that website and I don’t understand your reasoning

OP’s car is 1995, therefore, most likely not even OBD 2 compliant

In NJ OBD 1 car emissions (1995 and earlier) are still checked with an exhaust probe. My 1993 Caprice’s emissions were 10x the limit on the first attempt. For the second attempt I drove the car 50 or 60 miles the day before the second and successful attempt. On the day of the inspection I made sure the car was up to operating temperature and picked a time when the inspection lines were short (middle of the month). Even waiting in line even with the engine running for any length of time the Caprice would fail.

I read that website and I don’t understand your reasoning

OP’s car is 1995, therefore, most likely not even OBD 2 compliant

I’m pretty sure MA is just like NH. If the car doesn’t have OBD 2…then the only emission inspection is a visual inspection to make sure you still have the catalytic converter and other emission devices haven’t been disabled or tampered with.

Someone from MA know what the emission test is for older vehicles.

A fresh oil change does not hurt…

No more treadmill tests in MA:

Calif’s rules are more stringent than MA’s apparently. Only vehicles pre-1975 get an automatic emissions-test pass. Newer than 1975, each make/model has its own emissions specs it needs to pass. On OBD II & newer cars, there is the OBD II test, an evap test, and I think there is still an idle tailpipe test for most cars; but there is no treadmill tailpipe testing for most cars. But lucky me, my OBD I early 90 Corolla gets treadmill tested each and every time. Its one of Toyota’s early electronic fuel injected models, and maybe Toyota didn’t quite have the exact air/fuel control formula then for minimizing emissions. Maybe that is why my poor 'ol Corolla gets the treadmill treatment each and every time. Maybe it is just that Calif has all these treadmills laying about and have to figure out something to do with them. The guy at the special treadmill testing station, he says to me every two years, smiling, “It passes every time, so why do they keep picking on you?” … It’s become a standing joke … lol …

I don’t have any fundamental gripes about emissions testing. I like the cleaner air to breath. My main complaint w/Calif’s emissions testing program is about the gov’t department in charge of this program: they aren’t very helpful or pro-active. In my opinion they should help people pass the test. They should offer up a list of suggestions that car owners could follow to improve chances of passing. And they should offer up the emissions specs and levels that the particular make and model and year needs to pass, and the measured emissions stats of all the other cars of the same make and model and year that have been tested. And for those of that make and model and year that failed, the stats of what repairs were made to get them to pass. The gov’t department should have all that information, and I think they should share it freely with the car driving public. The goal after all is cleaner air, and it would help to be able to see all the data available.