How aggressive drivers cause collisions 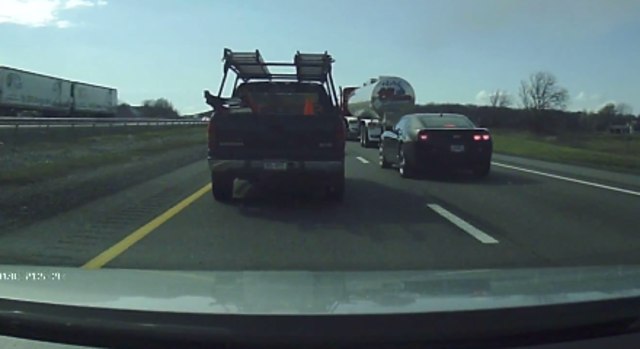 I agree but slow drivers and drivers that are afraid to pass a semi truck are the cause of a lot of accidents on the interstate as well.

The pickup driver should have sped up and moved back over into the outside lane. However, that Camaro driver could have calmed down a bit and waited it out.

Camaro guy needs a lot more than his brake lights fixed now. Of course the Camaro is like 99% at fault here, but the truck driver was being a childish jerk too. I’m sure he was angry, somewhat justifiably, that the Camaro tried to cut him off and almost caused a wreck, but that’s no excuse to hog the left lane and block him in. Be the more mature person, let it go, and let the guy get past. I don’t care for impatient drivers, but I also can’t stand the ones that hold up traffic, particularly if they do it intentionally.

I’m all for laws making the left lane passing only. Undertaking should be illegal, too.

Of course the Camaro is like 99% at fault here, but the truck driver was being a childish jerk too.

The Camaro driver is 100% at fault. I agree the truck driver was being childish…the accident was caused by the actions of the Camaro driver. Hope they throw the book at him.Reckless driving, Reckless endangerment, driving in the break-down lane…and the list goes on. If anyone was injured this guy could face jail time…and rightly so.

The camera car seemed at times following all this drama a little closer than I would have been comfortable with.
Flying debris could have spoiled his day.

My thoughts, The camera guy as mentioned was a bit too close to the action. I don’t know what the speeds were though.

I get this everyday, people cut in front of me. I just tap my brakes and let them go. I also move to the right for tailgaters, even if they are way over the speed limit. I want to get home safe and that’s it. I am not going to fix all the crazy in this world.

A close look briefly reveals another car off the road behind the semi. Likely was following the semi in the right lane.

Hmmm, whatever happened to the car in front of the pick up that was causing the back up in the first place?? He must have finally passed the semi and then the pick up should have passed and moved over. Not that the Camaro wasn’t stupid but driving mile after mile blocking traffic is not a smart move. I never allow that to happen. If I’m in the right lane and someone is shadowing me like that, I either speed up or slow down to not allow them to block the left lane.

If the Camaro driver is alive, he will no doubt lose his license, and I’m glad I won’t be confronted by him and his crazy driving. The pickup driver also deserves a few tickets. I hope he loses his license too, assuming he is alive. It’s a shame semi driver was caught in the middle. I hope he’s OK.

Correction to my previous comment – what I thought was an additional car forced off the road is actually the camero that caused the accident. I was in error. My apologies.

Although the pickup driver showed poor judgement, he was in no way at fault.

Maybe for a split second that Camaro driver felt GRANDLY VICTORIOUS as he moved ahead of the pickup. After all, he won. That’s what was important to him at the time. It’s unlikely he’s happy with his prize though.

The Camaro driver is 100% at fault, and I hope after he gets out of the hospital he does some jail time. He clearly needs to get “the book thrown at him”; punished to the maximum extent the law will allow, for as severe a charges as the law will allow.

I’m glad somebody got the evidence on video. Without that video evidence, it would have been his word against the others and whatever circumstantial evidence the cops could gather.

All the people in this crash are alive and fine. To nobody’s surprise, it turns out the driver of the Camaro was intoxicated at the time of the crash. 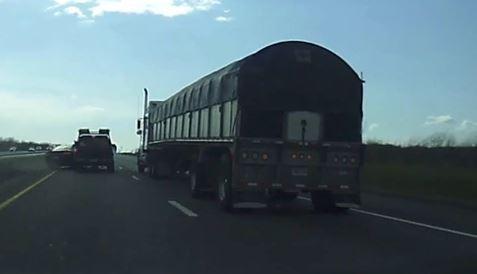 Video: Dash-cam captures big crash on I-90 in Batavia; driver charged with DWI

An Ohio man is facing DWI and other charges after causing a three-vehicle crash on the New York State Thruway -- and it was all captured on a dash-cam.

Good example of “If you wrestle with a pig, you’re sure to get dirty”. The “pig” (the Camaro) is 100% at fault, but that doesn’t help the pickup driver who now has to deal with the crash consequences.

but hey…he SIGNALed his ‘‘lane change’’ onto the left shoulder !