My radio/in-dash navigation unit stopped working last week. I checked the fuse and it wasn’t blown. I’d read online that sometimes disconnecting the battery can fix this. I gave it a try…waited 15 minutes…and like magic, everything started working.

I was super happy. Until I tried to close the hood.

It won’t latch correctly. It’s like it’s stuck in the ‘half open’ state, where you would need to slide your hand under and push the release. Before, I just couldn’t listen to the radio, but now I’m afraid to drive (either because the hood could maybe fly up, though really because I’ll get pulled over and have a cop tell me how my hood could fly up).

This is the best picture I managed to get (it’s taken from the inside of the engine bay facing out). 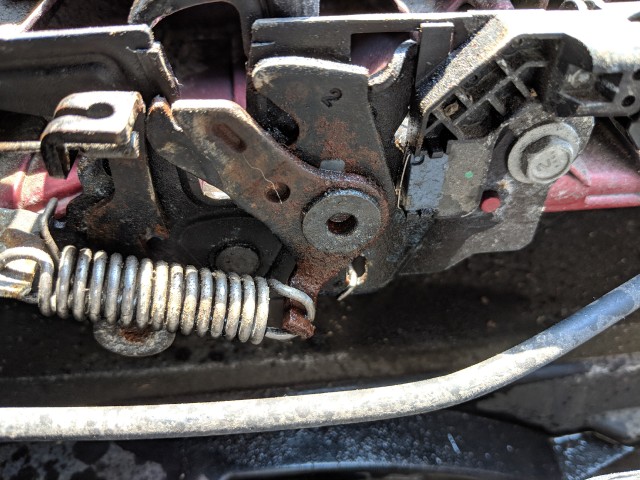 Can anyone offer up any advice? The nearest mechanic told me they couldn’t get to it today, and they are closed for the 4th. I’ve got some family crap I’m supposed to be driving to tomorrow.

My best guess is that I need to move this big piece of metal? But it sure seems like it doesn’t want to move at all 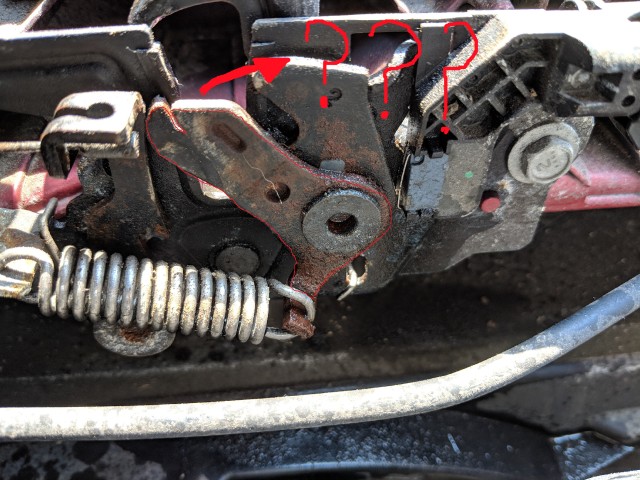 Any advice would be greatly appreciated.

Clean the latch assembly with aerosol brake parts cleaner. Lubricate the latch with white lithium grease and see if it works.

Your picture shows the arrow that you drew. The latch actually swings in the opposite direction to latch the hood.
The piece you think should move is pressed down, kind of like cocking the latch, and the part with the two on ot then swings down the traps the piece that is attached directly to the hood itself.

Try using a stout screwdriver and using the shaft horizontally…press down to trap the screwdriver.
Then release the latch from inside the car.

See if it works then.

Sometimes someone working under the hood can lean just right on the latch and lock it down.

Make 100% sure NOTHING is in the way. On the latch itself (etc. When changing oil some put the oil cap where you took pic so the hood won’t shut and they remember to put oil cap back on) and check for anything along the sides of engine bay like tools left out or left on the actual engine. If you could take pics of the entire engine bay we could see if anything is out of the ordinary.

I broke the clip that holds the arm that keeps the hood up - when the hood is down. Unless I’m careful it’ll interfere with the hood latch.