I have a 2005 Honda Accord. The light inside of my stereo flickers on and off. And its very random. It flickered off for about 20 days and then one day randomly turned on. Then turned off. Every once in a while it will appear. Any suggestions on what might be causing this? Fuse? Faulty wiring? Thanks in advance! 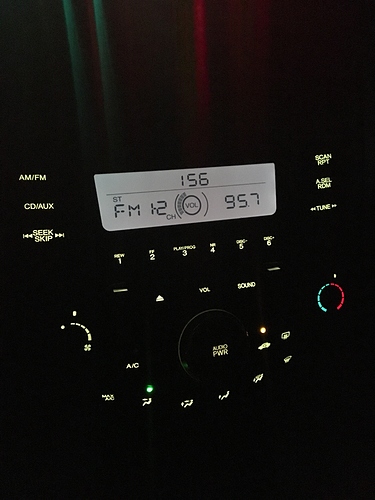 I believe the stereo light indicates if the radio is playing in stereo. A weak signal from the station will default the radio to a mono broadcast so you can still listen. That’s how many of my radios have worked. Sometimes aftermarket radios will have a stereo/mono button to lock into mono for clearer reception of far away stations.

Is it a single light, or is it the whole LCD display screen that flickers on and off?

I agree with Mustangman. Poor antenna connection at either end of the cable or even the Antenna itself could be at fault. You should also inspect the antenna cable for kinks or crushed points. Maybe even cut. Also, first, consider the distance from the station you are listening to and the possible interference from geography. FM radio has limited range depending on weather and the terrain. 40 to 60 miles then it fades fast.
Had any kind of work done on the car before this showed up? Was it near the antenna or the radio?
If distance is the problem, Get SiriusXM and your trouble will be solved. Costs a few bucks, but way better than regular broadcast. If your car isn’t equipped, you can buy a receiver almost anywhere.
Enjoy.

If the problem is the backlight for the LCD is turning off, that’s probably the light bulb inside the unit is failing. Common problem. The backlight for the radio LCD hasn’t worked in years on my Corolla. If you want to fix it, you’ll probably have to remove the radio unit and repair it on the bench, if a repair is even economically possible.

The lights on the buttons work I see, that’s good news. So you can do what I do in the meantime, program the stations you like and just press those buttons to listen. You already know what they are, so you don’t need the display to tell you.