I have a 2010 v6 camaro and am looking to get that old school muscle car sound out of it. Will glass packs get me what I want and if so any suggestions as to which brand would be best?

A V-6 engine usually sounds like a misfiring lawnmower with glass pack dual exhausts. The racket is so annoying you would be happy to pay to get the original exhaust put back on.

I would doubt it, wonder if this would work on my bicycle

Installing glass packs will be an experiment and probably won’t sound pleasant.

Not going to happen. I have a neighbor who has done just that and it is a waste of money.

You might consider something like a Borla exhaust. My oldest son put one on his Camaro and it sounds great without being obnoxiously loud. It’s kind of a subdued growl.

A bit pricy but all stainless and a lifetime warranty.

The best way to get the sound you want is to get a old school muscle car like a mopar hemi or ford big block.

The answer to your question is no.
A large part of what made the old muscle cars sound as good as they did was the crank angle in the V8 engines. By “crank angle” I mean the crank’s rotation angle at which each firing happens.

There is another definition of “crank angle”, being the angle at which the cylinder fires relative to TDC, but that isn’t the one I’m referring to.

Your induction system is also dramatically different from the old way. Some years back I made some changes to my own induction system, making it a bespoke ram air system, and to my pleasant surprise it changed the sound of my engine. It sounds a bit like an old MGB now. I like it.

In short, there are technical reasons why your V6 cannot sound like the old muscle cars.

A neighbor of mine has two vehicles with V6 engines. He put “glass packs” on both. The make the cars sound like junkers that need new mufflers.

I’ve always even as a teenager thought the best exhaust sound would be no sound at all. My exhaust sound figure of merit is how quiet it is. My dad didn’t agree with this theory, and when the muffler on my first car fell off my dad told me he’d get a new one installed for me. That car hosted an inline 6 with single exhaust. When it came back from the shop it had a glass pax muffler installed. Oh my. The sound itself was ok, sort of like a playing card in bicycle spokes. I wasn’t impressed tho. B/c it was louder than the prior muffler. There’s already too much noise, why make more?

I’ve always even as a teenager thought the best exhaust sound would be no sound at all.

Fart can mufflers, Funny, so we were at the golf course and one of my buds is a motorcycle trucker guy, now we heard these really loud whiny crotch rockets, and he was like they made a lot of noise, but I assume being at full throttle their rpm was not increasing that much, lame. Now I happened to pass an air biscuit, he looked at me, and I said just trying to keep up with the motorcycles, we both chuckled. PS @bing might need a 4th for the preserve for golf next week
http://www.grandviewlodge.com/the-preserve/

Back in the day I put a pair of Cherry Bombs on my '68 Roadrunner. At first I thought it sounded kind of cool but a few weeks in I took a road trip to Texas to visit a sometimes fling and they drove me nuts.
After a couple hundred miles they were giving me an annoying headache with the incessant droning so I decided they were going to come off and be gone.

The next week before I had a chance to change the mufflers back to stock I got ticketed for the exhaust by the local PD.

Some may remember back when that some 2-stroke motorcycles had expansion chambers on them to aid in performance.
Those would rip your eardrums right out and made the glass packs sound pretty tame by comparison.

The smoothest I’ve heard was back in '71, a buddy had a '70 Camaro with a 350 with Thrush sidepipes. But, as OK4450 pointed out, they can drive you nuts after a while. We took a trip from Grand Forks ND to Winnipeg Canada one weekend and that constant throbbing sound sunk right through my skull. I can only imagine what a long trip must be like with fartcan mufflers. It must be nerve wracking.

Some may remember back when that some 2-stroke motorcycles had expansion chambers on them to aid in performance.
Those would rip your eardrums right out and made the glass packs sound pretty tame by comparison.

The expansion chamber is part of a stock 2 stroke exhaust system, the black pipe wrapped around the engine seen in the picture. It is common to replace the stock pipe with an aftermarket pipe with a larger “tuned” expansion chamber. This doesn’t cause a significant amount of noise if a muffler is used. 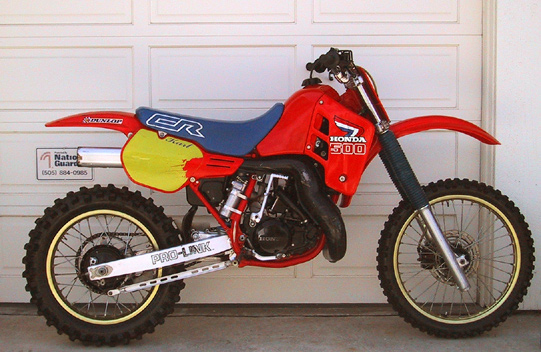 Actually that looks like a great place. I could lose a lot of balls there. About all I’m up to lately though is Goofy golf as in Mickey. Even got a couple hole in ones but the wife is stiff competition.

Visit a Camaro accessory specialty parts website. Many, many folks make performance mufflers for Camaros, even the V6. Many have sound clips that allow you to compare the exhaust notes to find one you like. I’d also look to Camaro V6 forums - and there MUST be some out there - and see what they post. Some post sound clips there, too.

As @ok4450 posted, Borla can give more like a musclecar sound for the V6 and as @the_same_mountainbik posted, you can’t get quite the right sound because your don’t have enough cylinders nor the firing order and I’d add, the mufflers are at the very rear of the car.

I had a '75 V6 Olds I put headers, a full dual exhaust with glasspacks at the very rear. Because I had no tailpipes, it was incredibly annoying! Loud, with a drone at highway speeds that would drive you crazy. I switched to oval mufflers and that helped a lot but it didn’t sound like a V8.

Put simply: what comes out depends on what goes in.
A 4 cylinder or 6 will never sound like an 8.
The more cylinders the closer are the exhaust pulses.
This makes for less of the buzzy sounding fundamental pitch and more melodious harmonics.

the camaro V6 is fairly new school. DOHC and so on. i was thinking it was the old 3.8 pushrod motor. which we messed around with on our grand prix SC models. always sounded bad. i assume camaro has 60deg vee angle? makes me wonder what the new mustang voodoo motor with the flat plane crank will sound like.

That 3.8 sounded…“distinctive.” Not necessarily good, but you knew when you heard it, it was a 3.8. I think it had something to do with it being an odd-fire, with a 90-deg block?

Same thing with the “Iron Dukes” still powering postal LLVs. You can always tell when the mailman’s coming…

There is a switch in the console that allows you to “open” up the exhaust for a bit more noise if you like.