I cant recall the actual model now that I think about it.

I think it is any car that allows the driver’s feet to protrude though the floor and come into contact with the pavement. My late cousin had a '57 Chrysler like that.

You’ve never seen this? Ever? It is propelled by Fred’s feet, so no floorboards. 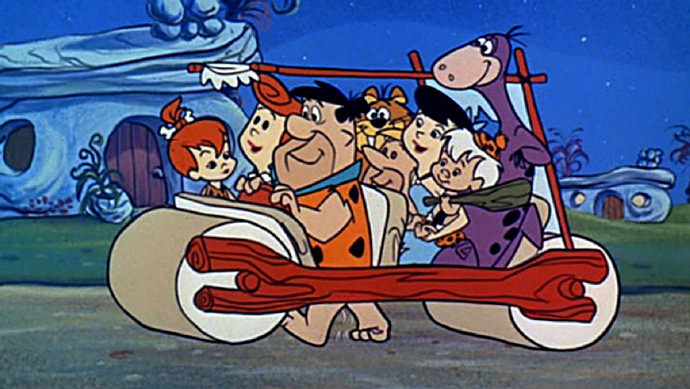 I used to love watching those old Hanna Barbera cartoons

That is when they knew how to make good cartoon’s. It is sadly a by gone era.

I seem to recall the car being referred to as the “Flintstone Flivver.” Possibly I’m misremembering. The theme song even made a reference to his car:
“Let’s ride with the family down the street,
Through the courtesy of Fred’s two feet.”

That is when they knew how to make good cartoon’s. It is sadly a by gone era.

IMHO the era of “good cartoons” coincides with the classic Warner Brothers stuff. The field was already in decline when Hanna Barbera came along.

Speaking of old cartoon’s I wonder if Amazon on got the idea from the Roadrunner and the Coyote using Acme product’s. If I remember right it was alway’s same day or over night delivery.

IMO, the era of good cartoons coincides with when we were young enough to enjoy them. I’m too old to enjoy much of the children’s fare on TV today. I enjoyed the old cartoons mentioned above, Jay Ward cartoons, George of the Jungle. Even older stuff like Popeye. I never liked Barney, but my oldest daughter still loves it, even at 31.

Yes, those Jay Ward cartoons were great. I’m a kid at heart so I still enjoy classic cartoons occasionally. I used to watch with our daughter when she was younger back in the 90’s but IMHO most of the stuff at that time was pretty sad. A lot of stuff about people/things fighting. The last cartoon I really liked, apart from some Disney stuff, was “King of the Hill.”

Instead of brake shoe’s Fred had brake sole’s.

The last cartoon I really liked, apart from some Disney stuff, was “King of the Hill.”

I liked that show, as well

A lot of memorable characters on that show

Pressed stone feet, I think the song called them.

Fine we are going to lockdown any, so what was tom Slicks car? https://www.youtube.com/watch?v=owhK0xIseXw

I don’t recall anybody saying it was

Most of us are old enough to have watched the Merrie Melodies cartoons without edits. These cartoons were shown in theaters before the movies and contained humor for the parents as well as the kids. When they were scrubbed for violence, and anything not “PC” they were no longer watchable.

The Flintstones was a prime time cartoon back in 1960 to 66 on ABC. It reflected the sitcoms of the day much like The Simpsons or King of the Hill does today.

Pressed stone feet, I think the song called them.

I originally thought the line was “through the courtesy of Pencil Pete.” I thought that was what they called the guy who drew the Flintstones, LOL. But, no, it’s “Fred’s two feet.”

Strictly speaking, the classic Warner Brothers cartoons aren’t for kids either. The guys behind them made them–and made them the way they did–because they liked them as adults. The Jay Ward cartoons were also for adults. There were references that kids wouldn’t necessarily get, like when “Fractured Fairy Tales” parodied Walt Disney.

Going back to The Flintstones, the show aired in primetime on a weeknight rather than Saturday mornings. It showed Fred and Wilma in the same bed, which was pushing the envelope at the time. Heck, Wilma got pregnant, for crying out loud. Pretty adult stuff.