Check this out. This is a list of some of the best (or worst) tv/movie cars on film. Have they forgotten any? I think the A-team van should be in the crusher but why leave off the Kenworth W900 from Smokey & The Bandit?

I was about to dish that until I saw vanishing point as number 31. I really thought Vanishing point would not be in there. Dukes of Hazzard as winner, ok I can see it based on popularity, but seems rather anti climatic, given all the other great cars and mods. Road warrior Black Mad Max Interceptor should be in the list.

I thought it was (Ford Falcon) but maybe I have my Mad Max movies confused.

The 66 T-Bird in “Thelma and Louise” was pretty important. That’s how they checked out, too.

They got the Audi S8 from Ronin, but I’d add the M5 from the big chase scene.

They include a motorcycle and an animated car, yet they forgot the 1928 Porter from ‘My Mother The Car’?? 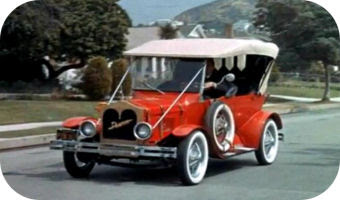 Well, they had my personal favorite, the Munster car, but they forgot the Beverly Hillbillys’ car!

I’m so disappointed that the Volga, the Russian taxi from The Bourne Supremacy, is not on that list because everything about that part was awesome. Who knew you can carjack a taxi with just a bottle of vodka?

And where’s Mr Wolf’s Acura NSX from the Pulp Fiction?

That taxi was a Ghiguli, I believe. Same model sold as a Lada overseas. The Volga is a more expensive ar and it even less reliable.

I always liked watching the 1951 Ford come up the famous hill in San Francisco in the television show “The Line Up” starring Tom Tulley as Inspector Matt Grebb and Warner Anderson as Lt. Guthrie. The quality of the show slipped and it didn’t last very many seasons after the 1951 Ford was replaced by a 1957 Dodge. Perhaps the slipping build quality of Chrysler products back in the late 1950s caused the demise of “The Line Up”. Inspector Grebb and Lt. Guthrie should have held onto that Ford.

I also liked the first season of “Highway Patrol” with Broderick Crawford as Captail Dan Matthews. The police cars used in the show were 1955 Buick Century 2 door sedans with manual transmissions.

No list is complete without the Tron-like Countach from Automan: 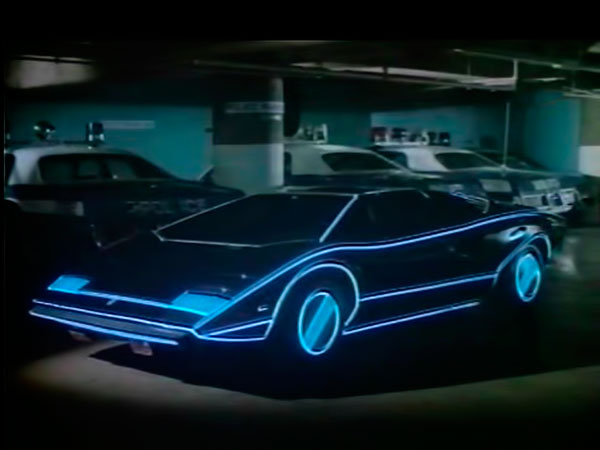 Some cars and other vehicles that I thought should have at least gotten honorable mention were these: the '57 Ford Fairlane driven by Janet Leigh (as Marion Crane) in the 1960 movie, “Psycho”; the yellow w/ black stripe '69 Chevy Camaro driven by Josh Duhamel (as Danny McCoy) in the series, “Las Vegas”, from 2004 - 2007; the red '71 Ford LTD convertible and the powder-blue ‘70 Mustang convertible, both driven by Charlton Heston (as Robert Neville) in the 1971 movie, “The Omega Man”; the demon-posessed black Kenworth W-900 with the big green clown face attached to the front of the hood in the 1986 Stephen King movie, “Maximum Overdrive”; the red Kenworth K-100 cabover from “B.J. and the Bear” (1978- 1981?); and the Kenworth W-900 that Claude Akins (as Sonny Pruitt) and Frank Converse (as Will Chandler) team-drove in the series, "Movin’ On", 1974-1976. Also, the '71 Pontiac LeMans that was commandeered by Gene Hackman in “The French Connection”; the '74(?) Buick Apollo driven by Roy Scheider in “The Seven-Ups” (he wrecked it by driving it under the back end of a semi-truck); and the souped-up '46 Ford convertible coupe used in a drag race by John Travolta in the 1978 movie, “Grease”.

I haven’t even seen most of those movies, and I think the A-Team van belongs on the list, mainly because I was 12 when it was on TV.

Don’t forget the Hudson Commodore in Driving Miss Daisy. What a fantastic car they found for that flick.

I’m pleased that the Prisoner’s Lotus 7 made the cut.

Actually you all have good suggestions. And since it is so iconic why not the trailer (Great Dane, Trailmobile?) from Smokey And The Bandit?

Followed the link, expecting to be disappointed, but the Monkeemobile was right there at number 100 leading off the countdown.

dadoctah…My research has showed two were used. A John Deere as you stated and also a Fordson