What is in your opinion the fastest (all around) street legal manufactured car in America?

Assuming you mean non-modified, and not counting kit cars (since final assembly is done in your garage, not the factory), you’re looking for the SSC Ultimate Aero. It’s fast enough that Bugatti had to upgrade the Veyron to keep its title as world’s fastest car. It has 1,287 horsepower, 0-60 in 2.8 seconds, and will (theoretically anyway) do 270mph. 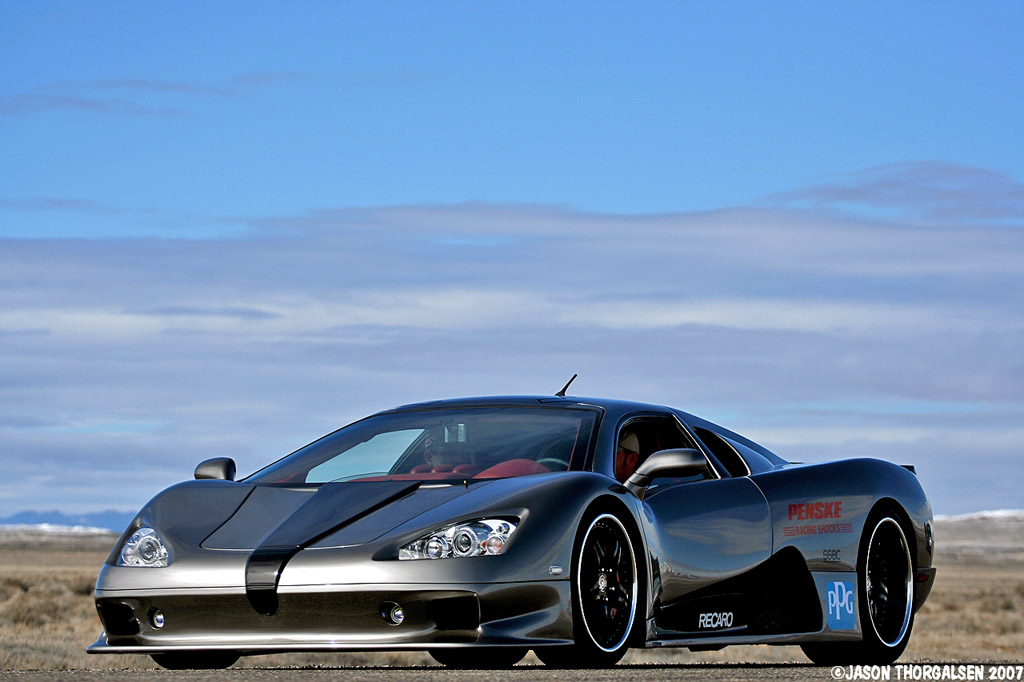 Each data point might have a completely different vehicle that is the quickest for that point.

But top speed can only be held by one vehicle.

Or, do you mean of vehicles under a certain dollar figure?

Do you mean a car real people can buy and drive or just millionaire playboys?

Speed costs money…How fast do you want to go??

The cheapest fast car was probably a 74 Trans Am with the 455 SD engine which could bury the 160 MPH speedometer shortly before the right rear radial tire blew. $350 worth of body repair and you would be back in business.

'74? I thought by '74 the emissions regulations had rendered gutless every muscle car. Is this an autobiograpical example? I’m surprised you made it to 2011.

Or do I need to watch “Smokey and the Bandit” again?

'round these parts,
The problem with owning such a beast is…

Local owners of a Ford GT40 and several Mustang Shelby GTs talk of the frustration of nowhere to go to open 'er up.
Even the long straight stretches of I-40 are amazingly wavy at 110+ .

The Henessey Venom GT is allegedly the fastest. 1200HP, allegedly able to be tweaked to 1400HP by playing with the turbo wastegates, with an estimated top speed of 279 mph.

That’s my neighbor! Well, he lives in a town about 15 miles from me. He likes to drive the Corvette to Ocean City - about a 4 hours ride. The cops love him! No, really. They pull up along side to ogle at the car, he pulls over sometimes and they can really get an eyeful. No, there is not any street racing. Saboury gets his ya-yas out on the drag strip.

How many have to be built? Jay Leno is having a one-off turbine car built at his garage in LA. It will likely be the fastest in the USA when it is completed. He’s not a playboy, but he certainly fits the millionaire classification.

It was actually a 74 and a half, like that would make a difference. It had the HEI ignition system which was known to generate 4400 HP without having an engine in the car! SD meant Super Duty. It went fast.

When the blue lights came on, the driver was known to say “Roll up the windows and buckle your belts cuz I got his daddy”. The Mopar police cars could barely keep up and the Fords didn’t have the same old power that they used to, so they fell behind.

I had the 69 Torino 428 Cobra Jet. Power. I never went over 95, due to the Fairlane body which looked like an overweight Mustang but still classic. That car had a nut driving it when I sold it. He burned off the snow tires in ten days.

You’re surprised I’m still around! If you had been in the car when my 70 LTD with the 390 in it went sideways when the tires broke free as I pushed the gas too hard at 70 MPH, I wouldn’t be. You would have found a big stick and used it. I saw MY telephone pole and gave up. Then the car straightened out somehow. Watch out for sand on the road. Could be dangerous.

It’s not the ups and downs in life that get you, it’s the jerks. I couldn’t be trusted in a car then. Now, I just shake my head to say no whenever I get the idea to be stupid while driving.