I have a 2001 Pathfinder w/ ~190K mile on it. It has been used regularly until this past winter. It has been sitting for about 3.5 months and I’m just now getting it back on the road. The battery has been draining due to non-use but I charge it and the car will start. Today I started it and after running for about 2 minutes the engine quit. When I got in the car I noticed the strong smell of electrical burning but no smoke. I did not notice this outside of the car. Upon trying to restart the car the engine just cranks with no sign of trying to start (as if there’s no spark). I suspect something (probably electrical) has failed while it was idling but I have no idea what it could be. Any ideas and or help would be appreciated.

P.S. To make matters worse (for me), I just re-registered the car on Friday and live in MA. We get 7 days to have the care inspected. Being that it’s in my driveway and won’t start, does anyone know of a way to get an extension so I don’t have to pay an inspection penalty?

I can’t tell what it is from here, but I just looked in my closet and it isn’t there, so it must be under your hood. Try looking there. Watch out for habitat, however. You may have just disturbed a critter nest. Maybe even a snake.

Seriously. something obviously fried. Perhaps the coil. Perhaps the starter motor. Perhaps he alternator. Perhaps a battery cable connection. The best way to find out is to have it towed to your favorite shop.

You might want to check if something in the ECM fried. The ECM is located behind the center of the dash.

I had the same thing happen with my Nissan pickup. It was idling in the shop and the engine just stopped running. I too could smell something electrical had fried inside the vehicle.

I removed the ECM and when I opened it, I found one of drivers was fried. After doing a little investigating I found the driver that fried grounded the fuel pump relay. And this caused the fuel pump to stop running.

So, until I can find a used ECM, I have a jumper wire in the fuel pump relay socket so the truck can still be driven.

First thing I would do is check all the fuses and see if one is blown. If you find one, replace it and see what happens. If it blows again, at least you know where to start looking for the problem.

Could ba as simple as a popped serp belt. Maybe due to a frozen pulley.
But I can’t find it from here.

Got a voltmeter, I think you have fuseable links, my first thought, and you may need a new battery! 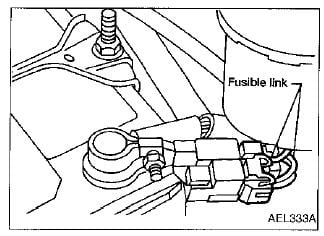 A possibility could be the electrical part of the ignition switch failing. The circuit operating the starter solenoid could still be operative with everything else dead through a separate circuit in the switch.

As to inspection procedure in your state I have no idea at all.