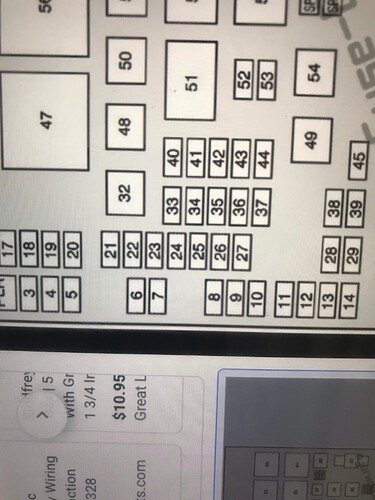 No idea, but all the circuits have to be fused of course. So the ecm and tcm still has at least one fuse somewhere in the nox. How many individually fused circuits there are, which circuit has what fuse, it all depends on the wire gauge, length of wires, and the current draw requirements. Copper is getting to be quite expensive, 70 cents in 2000, nearly $5 now, so copper price is another motivating design goal in newer cars, perhaps less copper is used in one design vs the other.

Does battery mean that it is always hot, when the ignition is turned off? The other ECM may not need battery power to preserve its memory.

I took out 36 by mistake to check brake light issue and put it in another slot. So wipers wouldn’t work. Nox does not have trailer kit so entire column had no fuses and torrent had 5? 33-37. 36 is wiper and it runs fine without it. I put it back. Torrent has trailer package. Lots of spare/unused fuse locations on this thing.

Does battery mean that it is always hot, when the ignition is turned off? The other ECM may not need battery power to preserve its memory

Yes, that is typical GM labeling. IGN is key-on 12V, BATT is always connected to the battery. Every ECM has a BATT connection as well as an IGN.