Discoloration and circles on hood?!

I’ve had my car for almost three months now… I walked out to look at it this evening since I had washed it last night and noticed this discoloration on the hood. It’s a long strip that goes almost the full width of the hood and has different sizes of dark circles in it. I’ve never seen this here before; it was definitely not on my hood previously! Anyone have any idea what caused it/ what I need to do to fix it?? 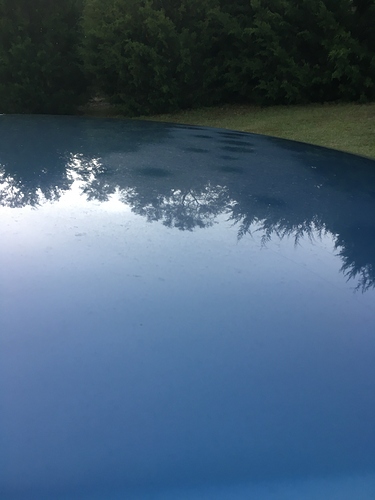 Was there bird droppings in this area before? Bird droppings can etch the paint and do permanent damage to car paint if you let it sit for a while.

The sun was not out, very cloudy day in the late evening. There have been no bird droppings in that area to my knowledge, and the engine hadn’t been running for at least an hour prior to washing aside from my moving it a few yards to get closer to the hose

Was the hood ever been repainted before?How old is this vehicule?

I’m going to be blunt here

You’ll have to post a better picture, one which clear as day shows what you’re talking about

As far as bad paint . . . the only obvious problem I see is that the Camry in the background definitely needs a repaint

It’s a 2017 and the maintenance records were extremely well kept/updated and no paint job was mentioned. I’m quite certain it’s the original paint

Haha I knew someone would point out the Camry.

Thank you . . . I now clearly see several of those dark circles you mentioned

How often is the Mazda waxed?

What kind of climate do you get?

Where I’m at, the climate is brutal to pretty much every single vehicle that gets parked outside

Has the engine ever overheated?

I’m asking because I’ve encountered some cars where engine problems generated such heat, so that the paint on the hood was affected

Awesome!
It feels no different than the rest of the paint so I’d say smooth. I haven’t waxed the vehicle yet since I got it a couple months ago, and I’m not sure when the previous owner had it done.

The engine has not overheated while I’ve owned it at least and based on the maintenance records I don’t think it has in general.

As for climate, Im in Alabama and right above the Gulf of Mexico so it’s extremely humid here and tends to be veryyyy hot in the summer. Wish so much I had a garage to keep it in.
It’s just so strange this wasn’t visible whatsoever until today.

If the problem is the white strips surrounding the dark spots, that would be an issue with the clear coat. It could be failure of the clear from the sun or other contaminants and would only get worse. Have a detail shop polish and wax to see what happens.

The picture isn’t close enough to confirm but it could be moisture in the clear coat. Moisture can get embedded into the clear coat if there is water between the clear coat and a plastic cover. The condition should go away after exposure to the sun. This shouldn’t occur after only washing the car.

Thanks so much! That was my guess… crazy that it happened so soon but I did some searching and apparently it’s a thing for Mazdas