I hope you guys are having a great day.

I have 2012 Chelvy Cruze and my engine light check showed up today.

I did a diagnosis check and it says P02999 Turbo/Super charger underboost.

I included a picture that shows a leakage above the belt and I doubt that it is a part of Turbo. I wanted to get some advice from cartalk communities.

I appreciate you all. 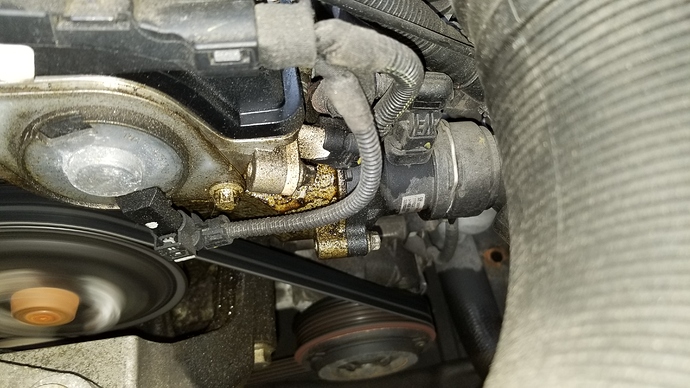 There was a turbo problem reported on carcomplaints that sound similar to yours.

This past October, I was driving down the highway and the car felt like it “missed”- lost a little power and then sort of back fired- in my rearview I saw a white puff. Yet, it kept driving about 5 minutes later…every warning light in the car lit up, looked like the space shuttle going down. I pulled into the closest thing I saw- the car would barely move, NTB. They were looking at it and oil was dripping down like the gasket was bad, but it was not acting like that was all- quickly determined this was something severe and therefore covered under power train- $99 diag. to them. Had it towed to dealer $85. After 3 days of run-a-round and providing every oil change slip and service record (60k miles)- they finally told me- turbo blew and blew the engine. The replaced the entire turbo and engine. Yet, they will not pay the tow or the $99 diag…

Look for air leaks in the intercooler and plumbing between the turbocharger and engine. If there are no leaks in the system you may have a failing turbo or a leaking waste gate.

Thank you so much for your reply.

I do not feel like I am missing any powers.

I decided to take it to the mechanic this week and get it check.

Thank you for your reply Nevada_545.

In your opinion, that does look like air leak?
I will keep that in mind and talk to the mechanic.

That looks like an oil stained engine, it is difficult to photograph an air leak.

Your mechanic should know how to inspect the induction system for leaks, stone damage to the intercooler, ruptured rubber connectors etc.

Just to elaborate a tiny bit on your comment and for future reference; a supercharger is belt driven. A turbocharger is not. A turbo is driven by exhaust gas.