This is Part II of a thread I started a couple of months ago. And, I realize I am always here asking for knowledge and advice and not giving much in return - I’m just not an expert. Interested in learning, but no an expert.

Long-story short: I installed a remanufactured engine after my Jeep threw a rod. Bought the full “everything with gravy” warranty. Threw an engine light two days later that goes on and off every couple of days. Misfiring cylinder. Swapped coils, plugs, etc. Those + the injector checked out. So the mechanic ran a CO test and found a bad head gasket on the cylinder. Found excessive pressure in cooling system - bulging hoses, leaking coolant.

Engine seller not returning emails or calls. Next step on my plate is to contact credit card company and open file there. Any advice from this crowd?

If you cannot get any response from the rebuilder in a reasonable amount of time… decision time! Leave it hoping they will respond to your liking, or fix it yourself so you can get your car back.

Have your mechanic pull the head. Once the head is off, you can see whether or not the engine is a quality rebuild or not. Are the overbores all the same size? (don’t laugh, I’ve heard of this) Does the cross-hatch pattern on the bore look good? Does the surface of the head and block look good and are flat? Will all the valves hold back brake-kleen when sprayed into the intake and exhaust? Take pictures, document everything. If the head gasket has a dent in it that the rebuilder created by resting a heavy head on it before laying it flat, take a picture!

If it checks out, replace the gasket and pursue legal action to recover your costs.

Who actually rebuilt the engine? And many warranties are just lipstick on a pig.

Since you do not use this car for quite some time, I assume you you do not need it to run by the certain date, do you?

I would pursue a case with a credit card company first, before doing anything else.
Pulling head and doing inspection will put you into bad shape as you effectively violate the warranty by your curiosity.
Document everything, present card company with plenty of documents backing your version of events.
From my experience, it takes around a week of back&forth before they give you a resolution.
Somewhere in the process, the seller might become very motivated to be found and to get it resolved.

Before tearing the engine apart, I would read the fine print on the warranty. I can’t believe they would allow someone to pull the head without their express permission. Likely they would replace the engine-but would that be at your expense like a lot of parts warranties? Fine print first.

My advice is to not tamper with the engine, but instead to take it up with the seller.

They aren’t returning emails or calls? Start out with a written letter, sent Certified Mail, Return Receipt Requested, asking for a response within 7 days. Still no response? Then file a dispute with the credit card company. You will, of course, need to provide documentation for a dispute of this magnitude: the diagnosis from a professional mechanic, a detailed record of your attempts to contact the seller, a copy of your letter, and a copy of the Certified Mail proof of delivery.

This isn’t really a car problem, it’s a warranty & possibly legal problem. It’s treated more or less the same as if you bought a couch and the legs fell off the first time you sat on it. The ultimate outcome will depend on the exact wording of the warranty. Informing the venders that sold and installed the engine of the problem is the first step. You have to give them a reasonable chance to address the problem themselves. Keep accurate records in the meantime. If you have telephone conversations w/the vendors, write up a summary including date and time and mail a copy to them. Ask that you be informed immediately if they don’t agree w/any part of your summary.

Long-story short: I installed a remanufactured engine after my Jeep threw a rod.

It is unclear who installed the engine, in the other thread you stated that there was a mechanic involved.

If the repair shop purchased the engine it is up to them to contact the supplier for warranty issues. Did you purchase the engine yourself and have it installed by a shop?

Clarifying - I purchased the engine and the shop installed it - and it was not a rod, actually was a rocker that punctured the valve cover and started a fire - did some (a lot) of research and found similar cases involving the Mopar 3.7 - everything from simple Google searches to deep digs into NHTSA website - found an engine company that claims to have a specialty in preventing his in remans and seeing that they had a 4.5 star rating on Google reviews (450+ reviews) figured it could not be any worse than a “quality recycled engine”

So, the shop has been supportive but ultimately it is a customer-provided part

probably time for me to go back to my day job - never thought this would happen - blame it on my trust that people stand behind what they sell, esp. when they offer a warranty

Start out with a written letter, sent Certified Mail, Return Receipt Requested, asking for a response within 7 days. Still no response? Then file a dispute with the credit card company.

I would contact the credit card people right away and tell them of the non-responses you have already experienced. Good luck and please keep us informed.

Well as you know your options are limited and you just have to decide which path to take.

The thing is, I never rely on those comments on the internet. Who knows who put them on there and what their background is. I’ve seen comments for books, tires, equipment, etc. half good and half bad and no relation to reality. Yelp is among the worst. I guess I either would have consulted with a local NAPA or mechanic who had experience. The only engine I ever bought though was a GM Goodwrench factory reman in the crate. Cost a little more but figure it was done right. Good luck.

Yeah, I am definitely learning here.

Late this evening they replied - and this is where the discussion moves above my understanding - mechanic reported the misfire on #5 cylinder - that compression was at 150 psi., engine company asked for readings from the other cylinders on the same bank - and with that they can get a better idea and “if it needs to be replaced we can replace it” - I am encouraged that they at least responded, and am just hoping for the best right now

Issue two, another clue . . . on a 14 degree morning, engine was simply dragging until it warmed, very little power. And, this new engine warms quickly - hits mid-point on the temp gauge after a mile or so, though it never deviates.

Clue three - coolant reservoir was empty after about 450 miles - that’s the leak we ID’d before.

Clue four . . . the attached photo. Area of deteriorated liner is above original fire, but that would have been replaced, and I know the cowl and gasket were fixed . . . what the heck is running so hot there, combined with everything else?

I have full faith and confidence in my mechanic’s diagnostic abilities . . . right now I am just trying to learn as I roll the vehicle into his shop for more investigation. 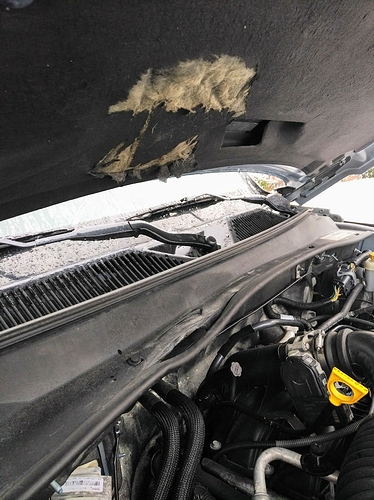 Only one source of exhaust gas in coolant - a bad head gasket, as far as I know.

Nothing wrong with that. If everyone already knew all the answers no one would ask us questions!

While I agree with @texases, I’d be tempted to let the engine company, at their expense, run their own analysis, if only so that when this almost inevitably gets before a judge you can show the court how much you bent over backwards to accommodate this company before you insisted on them honoring their commitment to sell you a properly working product.

Well, here’s another source - a crack in the head or block. But any of these are defects in the rebuilt engine.

Correct, in my opinion. I can see no way that those component could result in exhaust gas getting into the coolant.

The engine supplier wants to be sure the replacement engine was not damaged by a cooling system defect.

rooted in an engine defect, not a flaw in the cooling system,

I am not saying that you or your mechanic did this. But I am saying that the outfit you bought the engine from might say it. You will want to make sure they don’t have the opportunity to doctor evidence while searching for it.