I was reading this article in Four Wheeler Magazine, July, 2019 the other day. About beefing up a pickup’s rear axle to prevent axle-wrap. What does this jargon mean? About the only thing I understand is the truck’s rear axle uses leaf springs, and it has a bumper … lol …

Also, in the photo below, why is the thicker of the two tubes connected to the lower part of the axle, while the thinner is connected to the upper? Shouldn’t it be the other way around to minimize rear axle-wrap during acceleration? 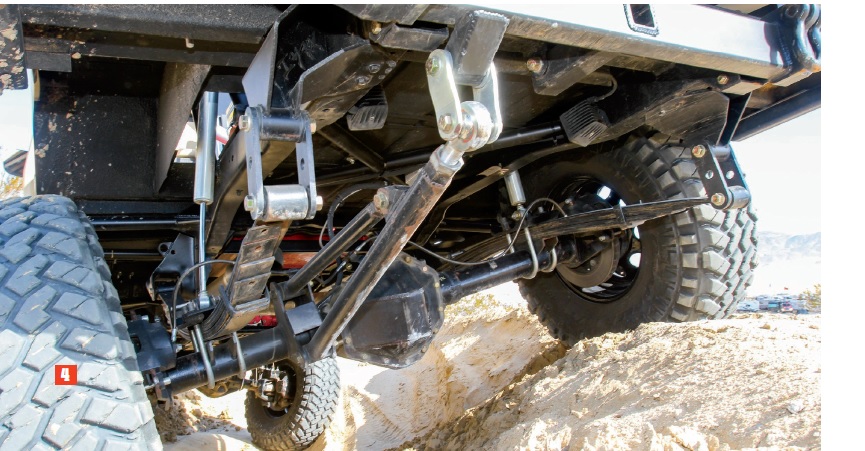 From Google: "Axle wrap happens when the torque at the rear wheels causes the axle to go the opposite direction of the tires. "

But if that was the case, then – since the tires rotate forward – the axle in the photo would be wanting to rotate backward. So why isn’t the thickest support rod positioned at the top of the axle, to prevent it from rotating backwards? Instead the photo shows the thinner of the two rods at the top of the axle. You’d think you’d want the thickest rod to be in compression when it really mattered. Maybe that rod setup pulls and pushes with equal effectiveness I guess.

And what the heck are DIY4X flipped shackles? And why are they flipped?

If the top rotates towards the back, the bottom must rotate towards the front, now the bigger rod is under tension. Also it’s farther away from the spring where more strength is needed.

Steel is less likely to bend under tension than under compression.

Steel is less likely to bend under tension than under compression.

Ok, I see. Best to put the rod responsible for the biggest expected force under tension than compression. That makes some sense.

They’re flipped for more height. Some are normally like those pictured but that truck probably had them the other way.

It is a lot like the traction bars the used to put on coil sprung GM cars at the drag strip in the 50s -70s to prevent axle wrap.
The coil spring suspension on the GMs were very bad at controlling axle rotation. The Mopars didn’t need traction bars until the horsepower levels got a lot higher because they had asymmetrical leaf springs wit a short stiff front section that acted like its on traction bar.

It was because they had big squishy bushings at each end of 4 control arms and had flexy frames they attached to.

[shackles are] flipped for more height.

The “shackle” is the part that sort of looks like a bicycle pedal, to the right of the shock absorber in the photo, one end connects to the end of the leaf spring, and the other to a bracket which bolts to the body of the truck, right? I presume “flipping the shackle” would be to put the black bushing at the bottom and the silver bushing at the top. If so, I don’t see how “flipping” would result in more height. What am I missing?

Does the left shock rod look bent to anyone else?

Yes it does look bent. Or at least flexed (in an elastic way). It looks to be some sort of long-travel shock by the way it goes through that hole in the truck’s bed. Maybe that’s just the compromise you live with w/long travel shocks, they flex a little. That’s some extreme terrain the truck is riding on by the looks of the right front wheel. And look at the right rear leaf spring. It is flexing the opposite of the normal direction.

Those Mopars with asymmetrical leaf springs also had a lousy ride. My various new Yorkers never rode as smoothly as the “C” body Buicks, their closest competitors.

I have seen the shackles the other way but not on a lot of vehicles and it would be less height. The part number gives it away DIY4X. They are talking about the U bolts. The 4X means four times. Yes you can call that a shackle when combined with the attaching plate. Usually the axle is on top of the leaf spring with the U bolts in the other direction. Thank you for asking the question. I look at the truck magazines at Barnes & Noble on chess night but I usually don’t try too hard to find out what’s really going on.

Yes. but the New Yorkers handled so much better than those Buicks. If you tried to hustle one of those Buicks down a curvy bumpy two lane, the Buick would be pounding against its bump stops while the New Yorkers and Lincolns would go down those roads 20 mph faster without drama. I always thought the soft ride belonged in the seat, not the suspension.

I presume “flipping the shackle” would be to put the black bushing at the bottom and the silver bushing at the top. If so, I don’t see how “flipping” would result in more height. What am I missing?

Here’s an example of “Flipped Shackles”, in this particular case, they were flipped to lower the truck.
Some trucks come with the shackle like the bottom picture, and if you “Flipped” them you’d raise the truck. 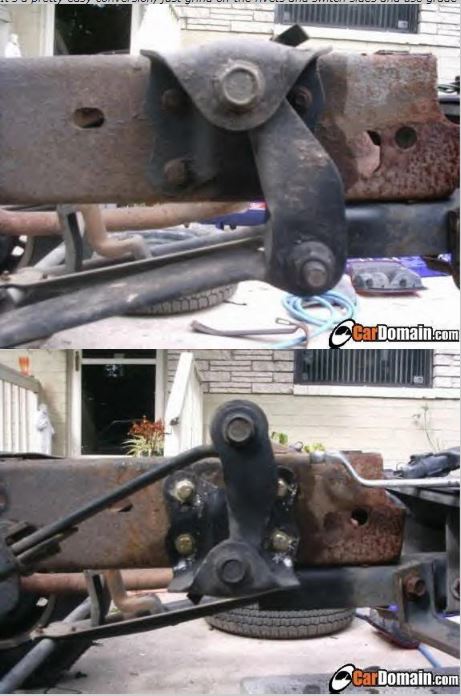 Yes, indeed it does! Good catch!

The lower eye bushing of the shock is full travel in the conical direction and maybe a bit more. It should be rotated 90 degrees about the shock’s axis so it can take more motion when the axle twists. If that right tire hits a bump when in the position in the picture, that shock rod is going to snap. A bit of a design gaff.

Don’t disagree about the Buick cornering on the bump stops but the floppiest car I ever drove was one of those full size Lincoln Town Car’s from the late 70’s. You couldn’t corner that thing any faster than the yellow warning speed signs that are posted for semi-trucks!

Sadly, never drove a New Yorker from any generation.

The top rod is shorter and has a pinned connection at each end, with no other connections. It takes nothing but axial loads. It is short enough that the rod doesn’t have to be as big to avoid buckling under the compressive load it is designed for.

The bottom rod is longer, and also absorbs the reaction force from the top rod at an angle to its axis. It needs to be a larger diameter to avoid buckling for both of these reasons.

Somebody pointed out the potential for more tension on the lower rod. In fact if the rods were only ever under tension they wouldn’t need to be nearly as big. If there was no compression you could literally use a cable instead of a rod. But the reality is that the rods can take compression or tension forces depending on direction of travel, trail conditions, etc.

I agree with you. Fortunately, my driving was confined to the streets of new York City or the New York State Thruway. All that interested me in those days was 0-60, high top speed, good brakes and smooth ride.