dont see that very often. they do cop car/hwy patrol stuff and have a ton of new seats 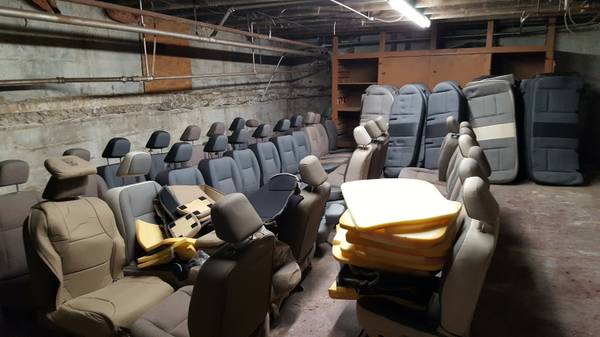 The rear seats in the background are probably brand new. Our town removes the rear seats in squad cars and replaces them with hard plastic seats. They say it’s easier to clean up messes and a lot harder for anyone their transporting to destroy.

replaces them with hard plastic seats.

Some of these plastic seats that I’ve seen are also designed such that one can ride in them with one’s hands handcuffed behind him/her.

Some of these plastic seats that I’ve seen are also designed such that one can ride in them with one’s hands handcuffed behind him/her.

I wasn’t that intimate with the seats. I saw them from the outside.

I wasn’t that intimate with the seats. I saw them from the outside.

I have! That’s where you sit when you’re doing a ridealong for TV and need over-the-shoulder shots of the cop driving.

They’re not especially comfortable, but they’re not uncomfortable either. The worst part is when you’re running over potholes - it’s impressive how much the seat itself cushions you from impacts that make it through the suspension.

This thread reminds me of an unusual advertisement running on the radio here. It runs pretty much once every hour. It’s a lawyer seeking clients apparently, and giving advice on what to do if you get pulled over for a DUI. He says never to agree to any on-the-spot testing they may offer, but instead insist to be driven to the station for a blood test. This got me to wondering, if you thought you were over the limit a little and opted to be driven to the station, during the ride should you do exercises in the back seat of the car to increase your metabolism a little? And if you did that, what would the police officer think? Do you think they’d complain if you were doing sit-ups in the back seat ? … lol …

Alcohol is metabolized by the liver on a replicable rate as far as my training for a bartender licence training, goes, Mayby a little could be exhausted by lung activity, but not significant in my understanding.

It’s a lawyer seeking clients apparently, and giving advice on what to do if you get pulled over for a DUI.

Lawyers. He should crawl back under his rock and disappear. We need to clear the roads of drunks, not tell people how to avoid the charges, which are pathetically weak in most cases anyway, when they know they’re DUI. Too many innocent people are dying and too many innocent families have their lives forever destroyed by drunk drivers.

Most states have done a deplorable job in keeping drunks off the road. The laws in most states are way too weak. 1st DUI should be a heavy fine and counseling. 2nd DUI should be mandatory jail time and loss of license for a few years. If that means you loose your job…too damn bad. By the time you get to your 3rd or 4th DUI, then I have no problem in extremely harsh jail time (20 years may not be enough). There are people still driving with multiple DUI’s. They are an accident waiting to happen.