I have a 2014 Ford Fusion hybrid and I was going to do a coolant flush (106k) on it. I have to do the main system and the inverter system. I planned to drain it. Add distilled water, run it and drain it. Then add a concentrate depending on how much water the system holds on to so I get a 50/50 mix.

My question is would you use a flush additive when doing the distilled water? Seems like the manual says avoid that but I could be misinterpreting it

Also, motor craft vs Prestone? Thoughts on which one?

Don’t use any flush additive.

That stuff is used on engines with heavily corroded cooling systems.

Thanks and is the thought process right to use concentrate.

It seems when you flush it the coolant system etc could hold about a gallon of water even after draining has stopped. Thus putting 50/50 would really be diluted to less than 50/50. At least that’s what one video said.

Or I could gauge it when I do it too I guess.

Why not bring it to a shop and have the coolant changed with a coolant flush machine? 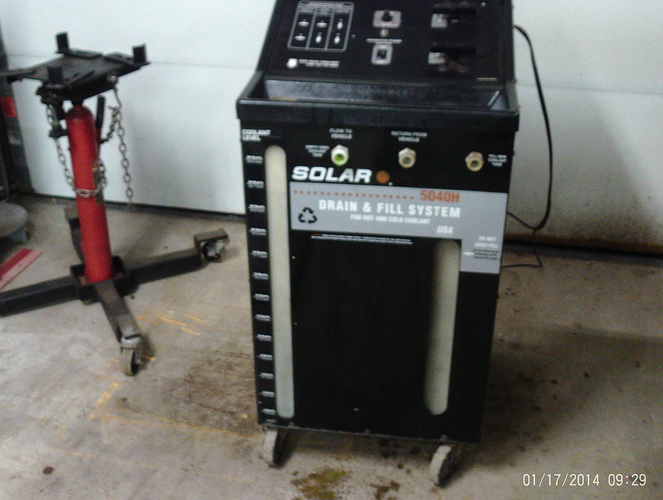 No muss, no fuss, and it doesn’t break the bank.

You should just drain as much coolant out as you can and refill with a prediluted (50/50) manufacturer approved coolant. This will insure that no contaminants can get into your system.

If you had gone 10 years or so without doing any maintenance to your cooling system and were having overheating issues, my advice would be different, but you have not yet abused your system so a drain and fill with premix is the best option in my opinion.

Also, motor craft vs Prestone? Thoughts on which one?

Motorcraft is the OEM fluid, nothing wrong with using it again. If you use Prestone, make sure it’s the long life stuff (usually a yellow or orange color), not the green short life stuff

Coolant changes are so infrequent and coolant variety so crazy (even withing Ford products) I’d want to use the exact factory coolant. The Fusion has used 3 different coolants over the years:
https://parts.ford.com/content/dam/ford-parts/resources/motorcraftpdf/Coolants_Brochure.pdf

Yeah I just ordered the OEM stuff. I’m going to do the main system today. But still trying to figure out how to do the inverter one.

Flush went well. Couldn’t get to the petcock, even with plyers. So you a technique from YouTube to unplug the line that pumps the fluid into the reservoir tank and run the car to drain it.

Put 2.5 gallons of distilled thru the system. Then added the coolant.

Old coolant looked pretty good compared to what I saw online. But it did look like the previous owner or pre owned dealership topped it off with green coolant at some point w/ the orange.

Getting quotes upward to 200 to have them flush the inverter. Their has to be some info somewhere. Can’t believe I can’t find anything on it.

Its a very short video.
here is the link

In this video he shows how to flush coolant. It is not very detailed however. I am curious as to what he did with the other hose he detached from the reservoir. Did he cap it off or something? Also he isn’t showing the whole start to finish. When do you do the filling? Do you just add fluid in the pressure cap hole? Did he make any changes to those hoses he disconnected? Looks like he detached the one hose on the top there and then did what with the other end of it? Then he detached the end of the hose for the vent line at the top of the radiator where it runs to and then draped it over to drain in the bucket. Wish he went into the procedure in way more detail and explained all those lines and what is happening exactly. If anyone knows about this procedure can you explain in some nice detail for us all? Thanks in advance. Van.

That’s the video I ended up resorting to for the main coolant system since I couldn’t get to the lower drain.

I detached the same hose, had 2 gallons of distilled water near by and would get in the car and rev it for a few minutes (3-5 I found) and then go top the system off. It definitely took some time and would have been faster with 2 people but it was my only option and all I have is time.

ok nice feedback Hpsportsfanatic thanks for that. What did you do with the cable you detached from the reservoir? Did you need to block the end of it? Also I find it interesting that that port can just remain open with no hose attached during the process. Also how high do you need to fill the reservoir during the process? Do you fill it right to the max line? Are you also detaching the hose for the vent line at the top of the radiator where it links to, then draping the hose off to the bucket? I am guessing that the reservoir needs to be filled high so the vent port starts working receiving exit fluid. Is there any danger to leaving the pressure cap off during the process? Were you worried about letting the fluid get to low and causing a head gasket burst or other damages?

The only thing I unhooked or touched was the one he did and draped it over the front end. (Ended up being messy)

I filled it up past the max since it was going to go right thru the system but I did make sure not to overflow it to where those 2 hoses connect to the reservoir. Especially since one at the time was detached.

Part of the reason it took so long to complete was b/c I kept getting out of the car to make sure it never got low and run those risks. I will say a lot of general coolant flush videos (not fusion specific) people left the cap off and would have a garden hose running in it. So maybe it isn’t a concern to have it off. But I’m just guessing based on my YouTube knowledge…

Personally… not sure if this is right. Once I saw the water run clear and I finished off my two or so gallons. I added the concentrate… not the 50/50. If I recall right the coolant system holds 2.1 gallons. So I figure 1 gallon of concentrate added to the system plus the 1.1 gal distilled water left in the system gets me rather close to 50/50 I’m sure I’ll top it off with more concentrate at some point but it’s pretty close to the right mixture if I had to guess. 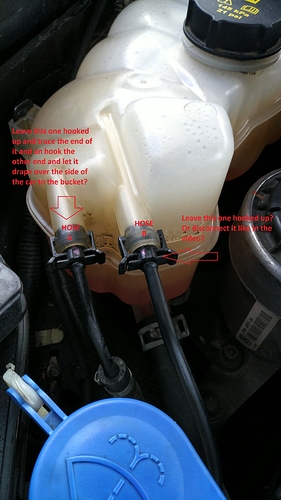 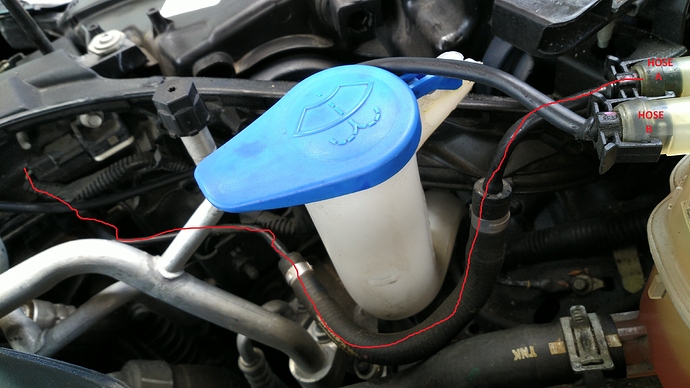 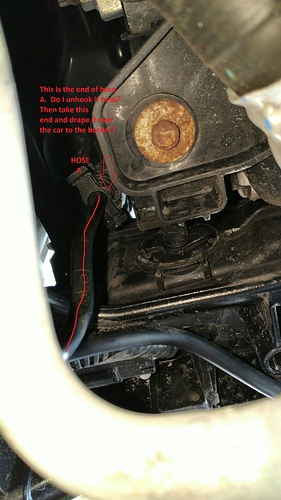