Confirmed: Car Pollution Can Cause Asthma In Kids, As Bad As Second-Hand Smoke 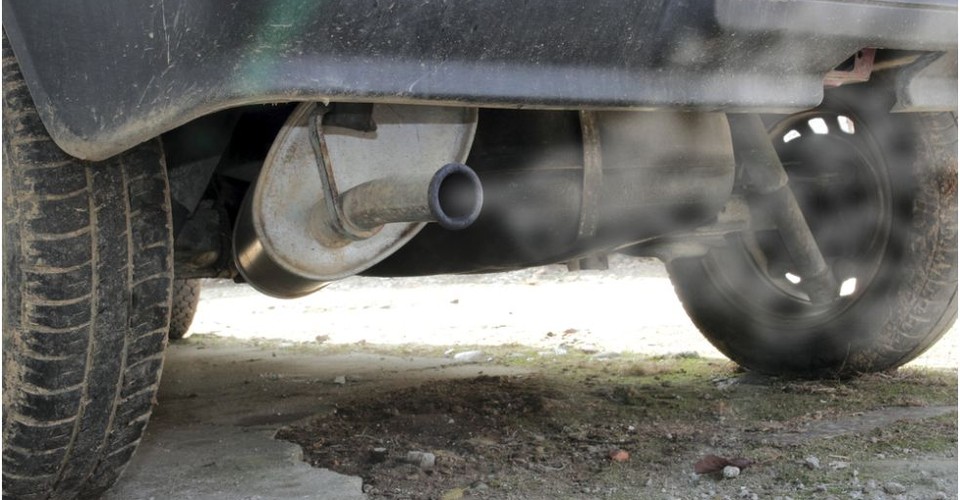 Car Exhaust Hurts Children as Much as Second-Hand Smoke

European researchers believe 14 percent of chronic childhood asthma can be blamed on living near busy roads.


I wonder if this will receive all the hoopla that second-hand smoke did. How about banning car commercials on TV the way we ban tobacco commercials? Will we see commercials on TV showing the danger of having cars near children? Will we ban cars around children? Nah, America loves cars, so whatever, let’s cough away.

Confirmed: Traffic Pollution Can Cause Asthma In Kids (Not Just Trigger It)

It's long been suspected, but a new European survey confirms it: Children living near areas of heavy traffic are more at risk of asthma. Previously, it was thought that pollution from traffic might only be a trigger for the condition, but the Los...

Of course…asthma attacks are one of the leading cause of kids missing schools…but, if doing any thing about it will mean govt. regulation, we will have nothing to do with it. Kids are less important then the idea of govt. intervention. Besides, car companies and corporations responsible are benevolent as they have kids of their own and as soon as the facts are out, they will bend over backwards to straighten things out. ;=( ( sarcasm)

This is likely tied directly to the large number a diesels used in Europe. Diesel particulates are a major pollutant with significant health effects.

So this probably doesn’t apply near as much in the US.

Reminds me of the post from “carscausecancer” a while ago…

Our exhaust fumes might pollute the air, but it’s gotten better in the last 40 years. I wouldn’t be surprised if some cars put out cleaner air than they sucked in(depending on location anyways).
China/India are who we should worry about. When you have smog that can be seen from space, then you have a problem.

We’ve done a lot since the 70’s…and probably can do more.

I remember back in the 70’s the cloud of smog over any city. I don’t see that anymore. But we can do better.

I’m sure there’s a group out there that would like to make it illegal for a kid to ride in a car. There’s not much pollution in So. MN or So. Dakota so people should just spread out a little and not all bunch together in the big cities.

Agree…we have done a lot…but with the car as it is with it’s internal combustion motor imbedded in our psyche and our evonomy, only gradual changes will occur. Electric with one moving part and zero polution vs ICE with a gazillion and a complete economy devoted to it’s production and maintenance, no contest…the kids come in second. If there were a battery today, as cheap to make as a transmission and with a range of 200 miles, you would still have to charge $35k for the car to recover the money’s lost for maintenance over it’s life time. Kids don’t even stand a chance with the NRA, let alone the economic influence of the automotive industry…jobs over kids.

@bings point is valid…where you live has a big influence. Surprisingly, polution in less populated Eastern states like ours, still have higher polution rates due to the prevailing winds from the industrial mid west…
So just moving to a less populated state in general may not be enough. It can’t be “down wind” of problems either.

Those who think it’s a problem in Europe and not here are in denial. We have an epidemic of asthma and breathing problems in the USA, which just keeps increasing. Does anybody really think that has nothing to do with car exhaust?

You cannot isolate just the effects of car exhaust without looking at the source of all pollutants in the air. It’s just impossible. And, we’re not talking about just industrial smoke stack emissions, but also chemical vapors and chemical residues. The worst air pollution is found, not outside, but inside homes and office buildings. With the high-efficiency buildings trapping more and more air inside, inside air quality has gotten very bad in the last several years. Couple that with the high level of natural Radon found in many homes, and today’s homes and office buildings are a witches brew of pollutants that many people cannot see, smell, or feel.

Now I’m pretty sure we’re dealing with “CCC”. Same tune. How is it that asthma is up at the same time as air pollution is way dawn?

I live in the Northeastern Corridor in the US, and we do have our share of bad air days; mostly in the summer. The local news programs tell you all about it in the morning. I used to live within a thousand feet of a major interstate. The front of the house had a view to the highway while the back did not. The siding on the front got dirty far faster than the back. I’m sure it was car and truck exhaust from the highway.

What do you propose, local yokel? You have a motive for the post, no doubt.

I do have to wonder why old guys like me are still alive no problems, and why the following generation is hypersensitive to lead free fumes, peanuts, milk and gluten etc.

The one study I saw that explained some of that is today’s parents efforts to shield their kids from all ‘contaminants’. Super clean houses appear to lead to allergy sensitivities and asthma.

Problem with electric cars is HOW the electricity is produced. Since a good portion of our electricity comes from coal fired plants…it’s NOT VERY GREEN. And if ALL cars were mandated to be 100% electric TOMORROW…we don’t even produce 1/5 the amount of electricity needed.

In this discussion about EV’s before, every study has indicated that the efficiency and lower pollution of producing electricity from a central source far out weighs that compared to use of ICE cars; even using present oil and coal for generation because of the mix of sources used. “Mandating that EVs be used tomorrow” and not gradually is a false and unrelated premise and has no bearing on electric car use. Like if the govt. mandated that everyone have a snow tires tomorrow, there wouldn’t be enough snow tires…has no part in what is actually going to happen yet zero pollution at the car source does, for asthmatics. It’s easier to move away from plants…then cars. The Coal Truth: Will the Coming Generation of Electric Cars Just Be...

Some analysts expect that existing grid capacity may be enough to power U.S. electric cars in the near future, yet they do not rule out the possibility of new coal or nuclear plants coming on line if renewable energy sources are not developed How are electric powered cars fueled with electricity from coal power plants better than the gas-guzzler I'm already driving?

The price of electricity presently is about 100 mpg equivalent.
That is the true element for cost efficiency…and the real comparison of effectiveness. If gas cars can get 100 mpg and be more pollution free, then delaying EVs with all their limitations has legitimacy…But, the bottom line is, the EV has legitimacy if only for it’s simplicity and durability if and when cheap enough battery technology is allowed to go forward. And, as demand for electricity, like gasoline demand goes up, we produce. Short term Energy shortages are contrivances for price increases. Ask the past Enron execs and Opec…Energy needs are shifted from one source to another as the price of one becomes more competitive then another. And right now, there is plenty of off peak surplus electricity available for any immediate up surge in electric cars…That’s the big advantage…charging at night for use in the day. For the most part, your feared coal plants burn at night with surplus energy and don’t shut down and you pay for their use both on and off peak hours through our rates already.

"Mandating that EVs be used tomorrow" and not gradually is a false and unrelated premise and has no bearing on electric car use. Like if the govt. mandated that everyone have a snow tires tomorrow, there wouldn't be enough snow tires

You didn’t comprehend what I was saying…I understand that it’s unrealistic to mandate everyone use electric cars…The point I was making is that we don’t generate enough power to switch everyone to electric cars. In order to do so we’d have to almost double our current power-plant output…and if that’s COAL…it’s not very environmentally friendly.

The price of electricity presently is about 100 mpg equivalent.

Depends on what part of the country you live in.

Imagine the health problems we’d be dealing with if we all still used horses!

" In order to do so we would have to double our current out put."

Mikey…I did get our point. But to me, the insinuation that if it were mandated tomorrow, increased generation would have to be done soon sets a false premise up that power can’t be a slowly evolving process over many years. The number of EVs made possible by the most optimistic estimates would create no new demand for power generation for many years with the surplus of power available during off peak hours. Power demands are secondary and inconsequential scare tactics compared to pollution concerns. It’s a Fox fear notion. Your neighbor will buy an EV and your lights will go dim…Things like the increased efficiency of today’s appliances, if continued at the same rate, could easily make up a substantial amount of any differnces in electric power needed in the near future for EVs. By the time EVs are a norm, sun belt areas will be getting substantial assistance from solar power as many are capable now.

Being an engineer I’m sure you could come up with better reasons then I, a lowly math teacher that massive metropolitan use of EVs is well within our future capabilities…and done without fear. I have confidence in guys.

Unless and until a cheap battery is found, EVs are a ‘non-starter’…sorry…

@dag - Your arguments would be better received if you don’t talk to people like their 5th grade dropouts who haven’t read a book in 30 years.

YES I understand it would be slow to incorporate…that’s NOT what I’m saying (and I think you know it). Given the current number of cars and the current number of miles people drive now…we do NOT have the current capacity power capacity to even come close (especially on peak demands). In order for electric cars to work (at least for normal New England commuters) the range has to at least double. That means more strain on the power system. Now hopefully if done over time other technologies will help this…Maybe better batteries.