Hey, so i own a 2006 ford mustang v6, i have been driving it for the past 3 months and 2 days ago i started my car to go to work and it wouldn’t go into reverse. I’d put it in reverse and there wouldn’t be any clicking into gear sound and the car wouldn’t move as if it was in neutral. I looked online and it mentioned that the transmission fluid might have been low so i decided to do a fluid change and while i was filling my car back up again with transmission fluid i noticed the fluid started to leak out half way through. I’ve looked online for causes and ways to fix but haven’t managed to pinpoint the cause yet? any ideas? 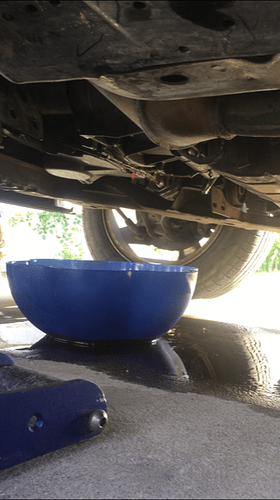 I don’t really have an idea where it’s leaking from. I’m assuming you removed the transmission pan to do the fluid change. Is there a possibility it’s leaking around the pan seal? If it isn’t leaking there, you just need to find where it is leaking and maybe post a picture…. If it’s leaking at the rear, could be the tail shaft seal, I suppose. Sorry, I’m not much help. Just throwing out guesses.

I looked at your picture a little more. Is that a drip at the bell housing (between transmission and engine)? If so, check for leaks around transmission cooler lines if any are in that area. If no cooler lines are leaking, could be the shaft seal on front of transmission. Transmission would have to come out in order to replace that, I believe.

i didn’t remove the transmission pan, i simply took the bolt out from the pan and let it all pour out. then i pumped new fluid back in using a manual pump. 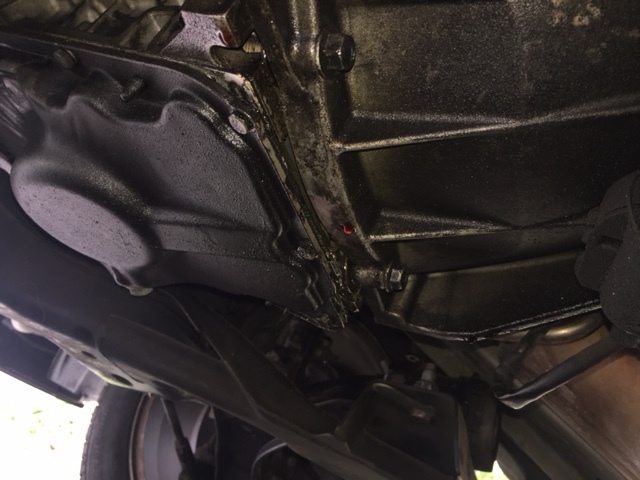 Here is a better picture, i am not sure what this part is called but i looked up bell housing and it does have a similar shape to where it is leaking from so perhaps that may be it. it is located at the end of the transmission just before the oil pan i believe.

How many quarts of fluid did you add?

when i emptied it, 3 quarts came out.
i googled the amount i needed to put back in, it said 11.8 quarts so i put 11.8 quarts into a flat bucket so that i could pump it all easily in one go.
it was going in nicely until about half way when it started leaking, id say even pouring out. so i stopped.
that was yesterday, this morning i went to the mechanic to ask a few questions and he said maybe i put too much fluid in as it requires 11.8 quarts when fully dry but only emptying the transmission pan u should only put about 4 maybe 5 quarts back in. so he said maybe the leak was an overflow caused by me putting an excessive amount of fluid back in.
However he told me to try put my car into reverse again and if it still doesn’t work there might be an issue with the tranny, so i tried putting it into reverse but reverse was still not working

If too much fluid is added, it will be discharged from the transmission vent, usually located in the bell housing.

okay, well i think thats what happened, thats what the mechanic explained. i must have aded too much and then it must have come out from the transmission vent in the bell housing.

Because it is broken. It is that simple. Thjngs just bream and usually at the worst time.

My bad, i didn’t mean to type second gear. i was meant to put reverse.
my car won’t go into reverse. i’ve not driven it since.

as far as the leak this is a possibility. you will need to go to a reliable tranny shop to fix both problems

Most of the auto transmission’s fluid remains inside the transmission and torque converter when you drain what’s in the pan. It’s possible the fluid level was too low, then you did what you did, and now it is too high. Too low, or too high, either could easily prevent a correct shift into R. Suggest to take it to a shop and ask them to get the transmission fluid level correct. Hopefully that’s all that’s needed. Note that it may take a few days until the fluid drains away from areas where it was overfilled. During that time it may not work correctly even if the level is correct.

If it still won’t shift into R, it’s quite possible whatever is causing it will turn out to be a problem that can be repaired without removing the transmission. Ask a few engine repair shops in your area which is the best transmission shop in town, and ask them for an assessment. Failing to go into R is a better problem to have $$-wise than failing to go into D.

Ok i will do that, thank you for helping me and giving me a bit of hope.
I appreciate it.