I have a 2007 Hyundai Sonota at 72,000 miles. I tried to start my car and it wouldn’t fully roll over. Check engine light came on too but my code reader didn’t pick anything up. Everything electrical still worked including lights, radio, etc. I got a jump and off enough it worked. Car started just up. I went to an auto store to have my battery and alternator checked. Both of those were in good health. After I left the auto store I had to make an emergency stop on the highway since my car was overheating. I checked my coolant & it was full so I let my car cool down and battery was dead again so I jumped it and drove a mile to the nearest gas station. After letting it cool again I checked the coolant tank and it was suddenly empty within that 1 mile. I bought coolant & refilled it. Also noticed more lights on including oil (oil is fine,) check engine, and battery light. Didn’t have to jump it this time. I sat there for a bit to see if it would overheat and all seemed fine. But started to drive again and it did the same thing! Pulled over due to overheating, coolant full, & need to jump battery. Now as I’m driving it cools down again assuming that means it used coolant. It’s almost seems like something is blocking the coolant from going into the radiator and then letting it go through. There is no coolant leak. I have an appointment for my car but I would like some ideas of what could be going on so I’m not overcharged for something totally unrelated (non-mechanic female here) thanks.

Remove the radiator cap when the engine is cold.

Start the engine, and as it idles, watch the coolant in the radiator.

If bubbles begin forming in the coolant, it’s an indication of a blown head gasket. 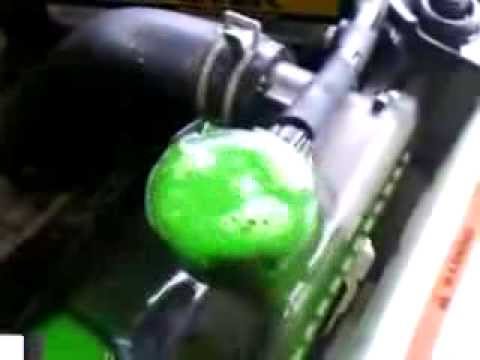 Did that. No bubbling. Everything looks healthy under the radiator cap. But that was after it decided to “accept” the coolant.

When was the last time the serpentine belt was replaced?

Also, oil is perfectly healthy and at the right level. Someone who helped me a bit suggested it might be something called a thermostat? He made it sound like it’s a device that gauges when to let coolant into the radiator but I’m not that advanced with car knowledge.

I’ve never had it replaced but I also just had my car checked over about a month ago and that wasn’t identified as a problem. Doesn’t mean it can’t be an issue though.

Some mechanics make the mistake of claiming the serpentine belt is good by visual inspection, when in fact it’s worn.

Ok, thanks! I’ll give that a read!

the thermostat might need to be replaced. plus being the coolant was low you probably have air in the system that needs to be bled out. it can cause an air pocket not letting the coolant to circulate. the belt should be checked and probably changed if it never has been. also, they should make sure the cooling fans are coming on. have them check for corrosion on the battery connections, and the battery cables themself can have corrosion inside the casings.

Or you could have two separate issues. You may have bad and\or dirty battery connections. That would cause a weak crank and a jump would start it. Also the thermostat could be stuck closed.
Just because there’s no bubbles in the radiator doesn’t rule out a bad head gasket.

I’ll definitely have them look into the the thermostat but battery terminals are new and clean. Thank you!

The tester had me rev the engine between certain RPM’s so it wasn’t technically in idle. But I don’t know if that makes a difference. I’m just looking to see y’all’s suggestions so I have a few ideas when I go into the mechanic.

battery terminals are new and clean.

how new and clean? verify they are tight.

why were they replaced?

I checked them over when I got the battery & alternator tested last night. They are on tight too. I replaced them because I changed my own spark plugs & dropped the nut that keeps the terminals tight. Plus they were old and corroded.

wouldn’t fully roll over. Check engine light came on too but my code reader didn’t pick anything up.

That’s probably normal. If the engine didn’t start the check engine light will remain on as long as the key is in “run”. The CEL only turns off after the engine starts.

The cooling system problem is the first priority. As long as you aren’t seeing a cloud of white smoke coming out the tailpipe at higher rpms (after the engine is warmed up), the first things to check are the coolant pressure cap, and the thermostat.

Despite the prior test results it sound like you still have a problem from among the battery, alternator, and or starter motor. The first test I’d do for that: Before the first start of the day the battery should measure about 12.6 volts; then immediately after starting the engine, 13.5 -15.5. Measure at the battery terminals.

Plus they were old and corroded.

if you just replaced the cable ends, get the cables themselves checked to make sure they are good, too.

If the motor stalls and the ignition is in the run position, this is perfectly normal.

Thank you all for your suggestions & help! I think I have it dwindled down to a few possibilities.